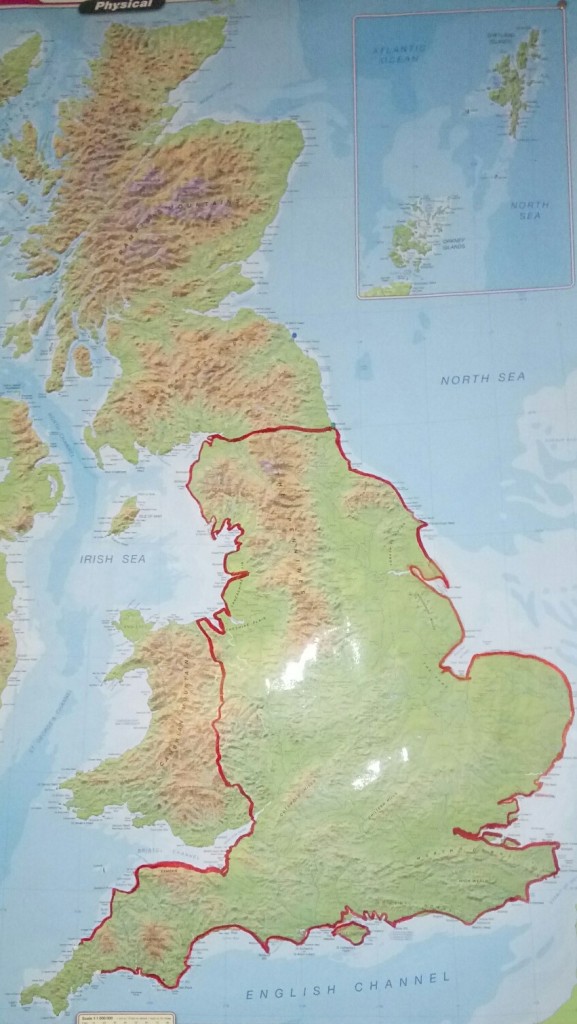 Map by kind permission of Ordnance Survey, with my completed route overlay in Crimson. My very detailed coast path is shown on my highlighted collection of the individual  1:25,000 Ordnance Survey Explorer Maps. I purchased every map with blue on it. This has created confusion  – you’ll find out why in two blogs time….

Wales is next; you can see why Scotland isn’t! Nothing to do with Nicola/Alex, just the length and ruggedness of their coastline. But I do think England is entitled to a referendum to decide whether we want Scotland to be independent or not…. the result might be interesting! So says Robert Duncan McIntyre. Who, in the light of Brexit, is closely studying his NZ Naturalisation; possible Eastern European ancestry; German association by marriage; French property ownership; and Welsh connections by conductance, convection or radiation. The latter highly unlikely, as I  have no musical gene whatsoever.

More parochially, English Nature are in the process of establishing The English Coast Path, due for completion by 2020. Hopefully they will follow the same route as me. Except of course my lost bits. English  Nature estimate the total length to be about 2,800 miles, not including Offa’s Dyke Trail ,nor Hadrian’s Wall Path; thus accounting for a missing  250 miles . My current tally is over 3,000 miles and growing probably to 3,300 miles. The discrepancy is not all about getting lost – there are many circuitous walks included.

I’ve had complaints! Sorry if the map looks a bit tatty; I’ve been marking it up as I finish each incremental walk and not always in a fit and proper state; often tired and emotional. It’s on the kitchen wall! I would  ask honorary cousin Mark to turn it into a murial(sic)… but I’ve no Wembley tickets left!

So (ironic); who is going to get to Land’s End first ? Bobl North or Bobl South?

ps sorry about the snow over central England.

So! Off we go again.

Last week, Thursday 4th May, on my 237th  Walking Day I was walking around the Essex/Suffolk border at Felixstowe, Harwich and Walton on the Naze, aiming to join together the loose ends of The Crimson Worms  and  complete a continuous path around England, from beyond Padstow in Cornwall, up  Offa’s Dyke Trail and the West Coast, across Hadrian’s Wall Path and down the East Coast, around the Thames, and coastal Kent and along the South Coast to the South West Coast Path as far as Charlestown. I’ve now set up a race to Land’s End from the North and the South S W Coast Path. I win either way.

Very first of all I had to complete a Ferry crossing of the River Deben, not operating last time I was there. At the time, I was not aware that Mr Donald Rice, our former Headmaster at Earls Hall Junior School, had recently died, and I would have called in at nearby Little Bealings to pay my respects. He was instrumental in organising the original Vectis Adventure to the Isle Of Wight, involving children from three Southend Junior Schools in 1959. Several recipients of this blog   were involved and remember him affectionately. Thank you, Mr Rice for stirring the wanderlust spirit .  Not to mention the goal nets and corner flags, that appeared shortly after his Earls Hall arrival, nor the discipline that some of us fell foul of, occasionally.

Did you see how I avoided ending that sentence with a preposition, Marie? Junior School influences endure – I know all my grammar is being scrutinised – even as I write.  R,L,S,J,R&M, one is never too old to learn. I never went on another school trip, not the fault of Vectis Adventure; just the feeling that holidays are for football and cricket etc and in between there might be room for academia. Could this be the reason why writing the blog takes up more time than walking the blog

Scarred for life…..I now am paranoid about whether ’tis Earl’s Hall; or even Earls’ Hall; or just Earls Hall? Discuss! 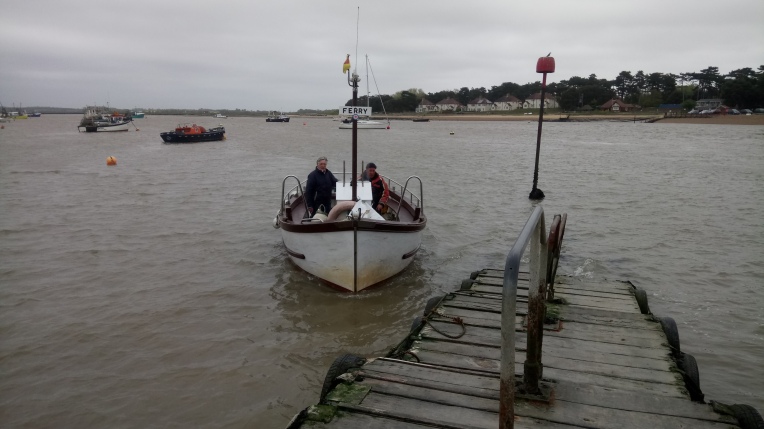 And then, similarly, I had to cross from Felixstowe, Suffolk to Harwich, Essex. 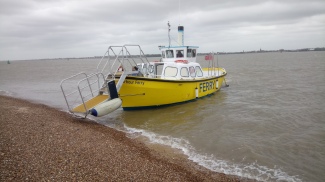 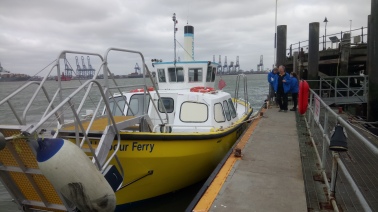 After a trip around the Harbour, I alighted at the Harwich Ferry Pier under the overseeing eye of  giant cranes on the Felixstowe side. These watched over us throughout the walk. 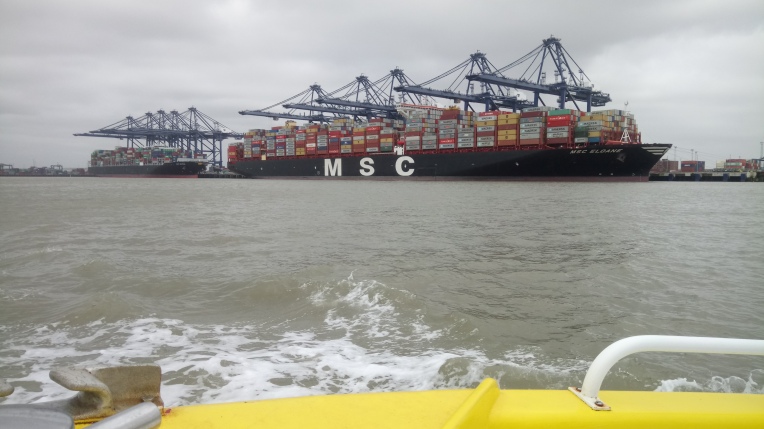 This 26 mile walk  from The River Deben, near Felixstowe, to Walton on the Naze completed several untidy loose ends and in the modern jargon, literally, gave me closure.  Illiterally, tiredness set in and, as a result, I got Blogger’s Block and verbal constipation, such that,  it is now several days finished yet I have written nothing.    Fortunately, my walking companion, Malcolm Mcleod, proved very much more able to provide constant good humour and written output than  walking  input, whilst operating on only one knee. Therefore you’ll be relieved to read, I have relieved myself of  writing this Episode, in favour of Malcolm, who received two written citations. One for Being the oldest guest walker, the other for completing the stretch on one knee.

I do believe that, having set the trend for guest walkers writing the blog, I predict the next Episode will follow likewise.   If only someone would take over the walking…..

In support of Malcolm’s input, I would add that, like me, he has never really grown up and he can easily attain the skills to talk up to three to nearly thirteen year old grandchildren. Let us just say the picture, taken by him, of me irrigating the countryside should have got censored.

Mrs Malcolm – or Diana – as she prefers to be known – kindly provided full board and lodging, the excellence of which was only partially subdued by Malcolm falling asleep at  the dining room table. In between mouthsful .

Well, you wouldn’t look at the camera, standing alongside those pjs, would you?

Otherwise alternative accommodation was provided by  The Castle Inn Campsite at Ramsey, there’s the tent next to the toilets…. 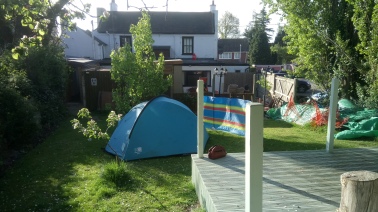 Look! Just one Scarlet Worm stretching from past Padstow, all the way round the English Coast and back to Charlestown. The End is Nigh! Just the race to Land’s End, and The North Eastern Spur from Newcastle to Berwick on Tweed and I’m home.

Throw a double six and game over. 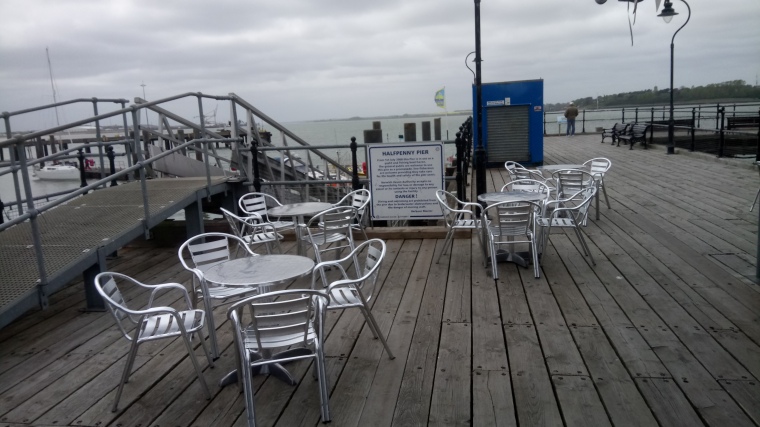 Rendezvous with Malcolm on Harwich Pier, with RNLI Station and shop crewed by Jim and Gerry, who sold me my Harwich Mug and a new black waterproof; how could I forget my orange outfit?

We stocked up on coffee and cakes ready for the walk in the Café on the Pier. 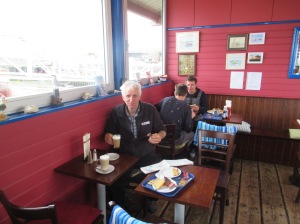 “I am mobile again, but haven’t told Diana, so am getting endless streams of tea, coffee, goodies brought to me. Here are the photos and some thoughts from my side of the pain barrier which I hope will help with the blog.

So: (I do hope that’s ironic – Ed) The day was both agreeable and enjoyable despite the misconceptions that underpinned it. The first was obviously our different interpretations of the phrase “an early start”; you got up at 5-30, I arrived at 9-15.

The second was my assumption of learned and confident navigation of an O. S. Map by such an experienced traveller. However , thanks to your careful planning and my blind faith in the abilities Wally Allen had instilled in me all those years ago, we got by very well. I suppose for all who read  they may also misconstrue the word ;”ramble”; yes we walked esplanade, sea wall, seawall footpath , road, field track and back garden but “rambled” much wider in our 6 hour conversations – even if, towards the end talk was restricted to you saying “I could go and get the car; you could wait in this pub/bench/verge”.

the view along the beach with serried  ranks of groynes as we left Harwich and passed the former site of “Hi Dee Hi” camp site; 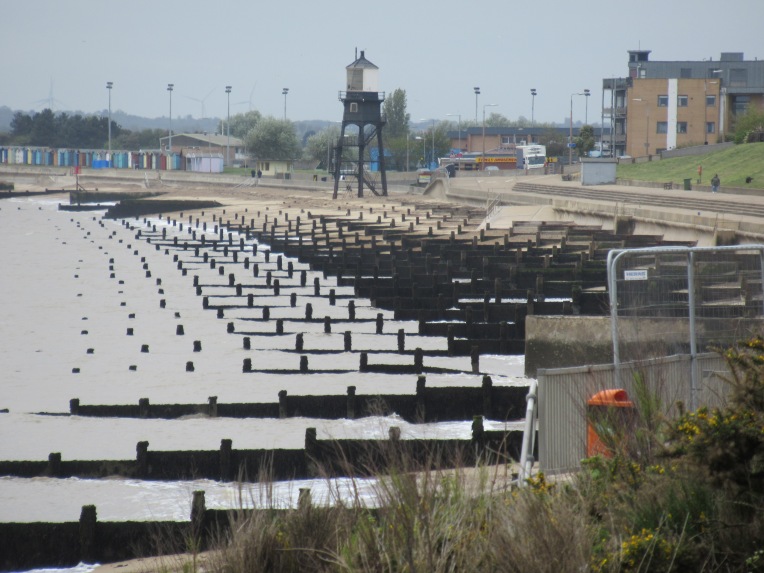 the grey menace of the North Sea (before the tide went out !); 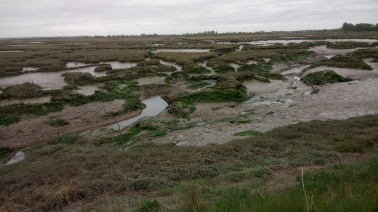 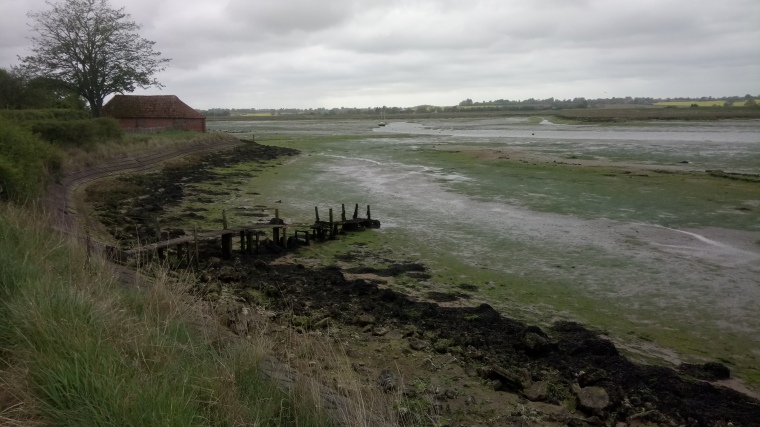 the shifting sight of the Felixstowe Cranes which must have been on a barge so often did they appear in a different quarter of our view;

Your excitement at finding a sluice named after Gordon Strachan;

The road walking was harder underfoot but mitigated by the thought that we made an attractive couple so close did those blonde Essex drivers come to us. The last mile or two were  a bit of a struggle, and thanks for your patience; left to yourself, I think you would have finished, gone back and packed up your tent long before I limped home. I suppose the last memory will be that we were not arrested, for what appeared a dubious activity as you were kneeling trying to get a second knee bandage over my boot!!               (Walking the Essex Way? – Ed) 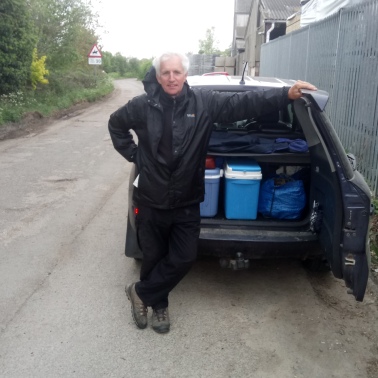 Thanks Bob – I thoroughly enjoyed the day – Malcolm

On the final day I departed from Malcolm and Diana’s home in Maldon to visit Mersea Island and take the ferry to Point Clear, thus completing  the link between North and South on the East Coast 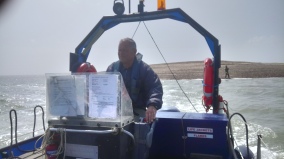 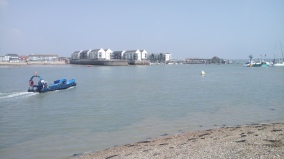 ….and home briefly before setting out for Cornwall again – Looe to Plymouth.