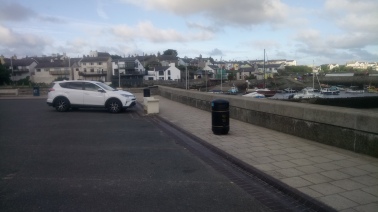 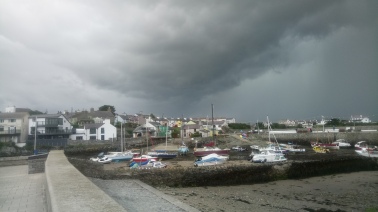 *”Under canvas” needs to be qualified;          The first night residing in a friendly pub carpark, whose  kindness shall remain anonymous, next to a storage container and rubbish bin and feeling I wasn’t alone at 3am in the long grass, which caused me to decamp to the car, whose deficiencies in the flat bed department further caused a sleepless night although I had an advantageous early walking start;

-The second night, also legally (£15), residing in an empty Cemaes public carpark,  above, conveniently along the Wales Coast Path, complete with toilets ( inconveniently locked overnight) and after discovering my tent pegs wouldn’t penetrate the tarmac and realising that Vera was better suited to sleeping in than Zud, and being out of camping practice discovering I had left various essentials behind eg mallet, demolition drill, wide necked bottle and so on, or not, as in the case of no overnight relief. The sound of the incoming tide did not help. It’s great to be back on the road again.

I am in the process of changing my modus operandi by snail-like carrying my sleeping equipped rucksack on my back, making my forays into the more deserted parts of the Wales Coast Path more efficient and less dependent on back up.

So far, a poor start.

I haven’t had a rant for a while, but I feel one coming on. I will sow the seeds of discontent and see what grows. A famous canary seed dispenser  has been unable to deliver my new one man tent and self inflating bed roll several weeks after Nanny kindly ordered them for me so that my new snail regime could change and prosper. I will only point out for now that I have parted with the money but received nothing in return, other than automated replies and a promise from Customer Services, surely a misnomer, to resolve the issue in 28 days, maybe sooner , I am running out of good camping weather, but I will give the seed merchant time to sort this out, and  will report more fully in the next blog, especially if I remain in slug mode.

A snail  without my shell.

They might also start investigating also how their telephone ‘contact us’ works; I gave up after nearly half an hour hanging on, and another occasion they gave up on me. As for the parcel tracking service…..well?!!

Anyone else had problems, or maybe give me a few clues how to communicate? Watch this space. An interesting observation on their feedback system – it doesn’t seem to operate if you offer negative feedback – the facility  expires. Or perhaps I am doing something wrong…   perhaps I should have stuck with Army Surplus Supplies?

Or get out more?

Here’s a nice bit of freshly painted, unwalked, open road on Anglesey, and a  new logo to contemplate. I travelled this way several times. It’s actually quite therapeutic being amongst the first to tramp new white lines

The  newly surfaced A5025 ,  outside  Wylfa Power Station near Cemaes,  which I used several times to access the Coast Paths. Also accolades for Bus Driver 140002, on the 61 route provided by Lewis y Llan buses and her fellow drivers for excellent and timely services to Llanfwrog – she dropped me as close as it’s possible to get a single decker to the Wales Coast Path . And, another time, I have never ever had a whole bus stop for me and ask if I wanted a lift! Perhaps I look a bit more senior than I think. It was late and I was struggling, but my rules forbade it. Many thanks anyway!

I was walking  the Anglesey Coast Path overlaying the Wales Coast Path, with the waymarker bird motif  temporarily replacing The Wales Coast Path Dragon Shell motif. It’s a cover up, and all perfectly legal,  I’ll only count it once! All the same, despite the name options, I walked 39 miles in  three days, making 3,719 miles in 302 walking days since my Walking Tour of Britain  started in 2013.

See “MENU” – Click on  “About” for more specific information – Pre-amble over.

Time for a change, you’ve all travelled far from home during this last summer holiday. Now it’s nearly over and you are getting ready to return to school. But also Rosie and Lauren are moving house too! Exciting times.

But other things are coming to a halt. At last I’ve recognised the end of an era and the current situation cannot prevail. It is just proving too much to record my epic Walk round England, Wales and maybe Scotland. It was foolhardy to think I could ever achieve  such a diary of events. This is the last blog of the walk in this format. I cannot continue walking and writing, the latter being the hardest bit.

The walking’s easy! Most of what you read is only whatever I’ve managed to remember – I know there is far more already forgotten.

So Hale and Farewell.

Unless my readership  can concoct a blog revival programme, future walks will be summarised in few title  words, but maybe many pictures. Maybe I’ll give it a go now?

Surely you didn’t think The Walk was over? No way. Nada. Niet. Non.  The time taken up, writing it up, could well be used to walk even more. 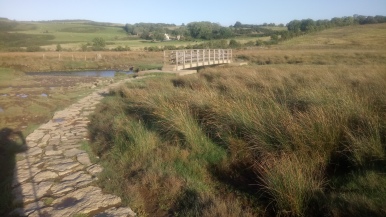 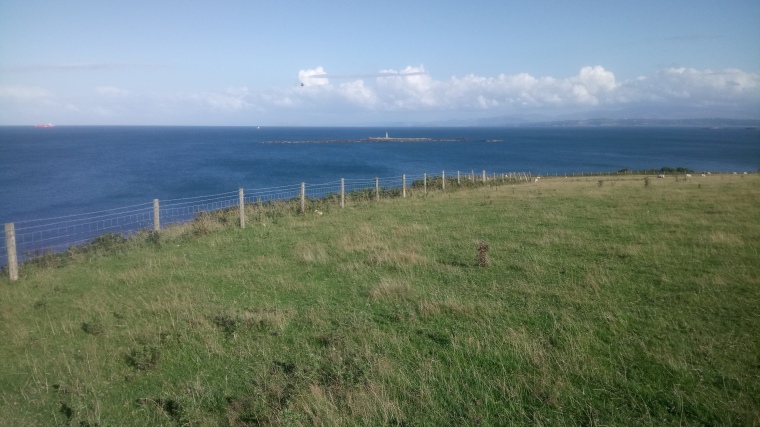 Above – the turn off from the A5025 near The Pilot Boat (camp!), past Traeth Dulas inlet  to views over the tower on Ynys Dulas from Rhos – mynach isaf. 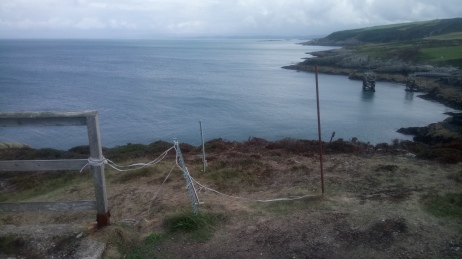 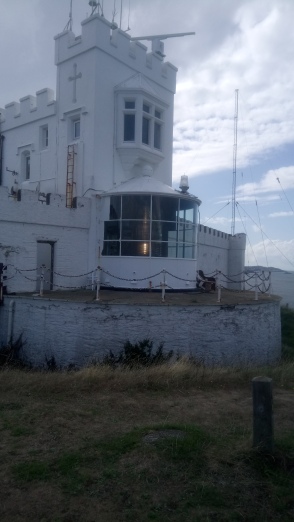 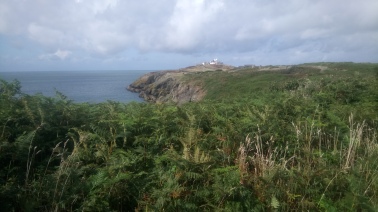 Views from and over Point Lynas and its lighthouse. 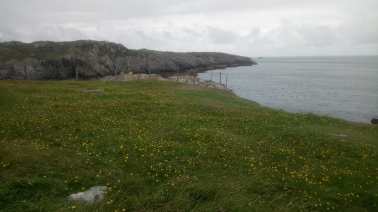 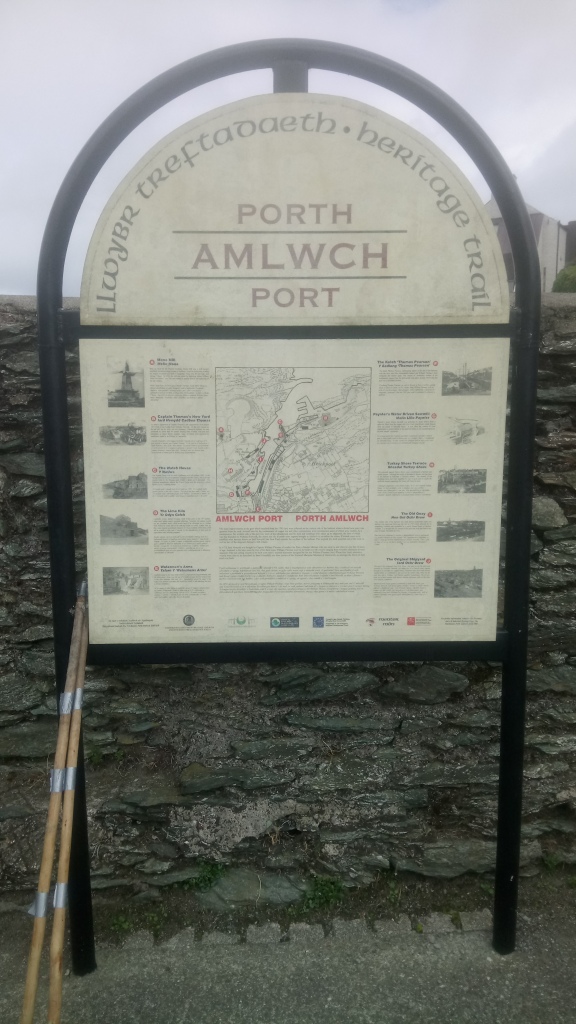 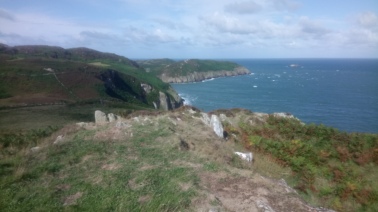 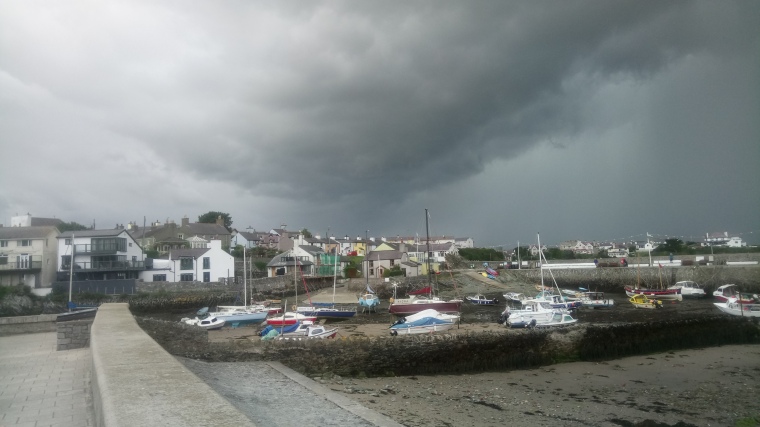 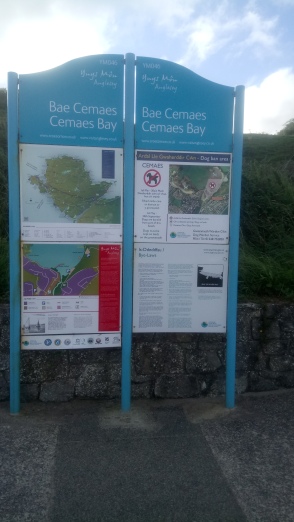 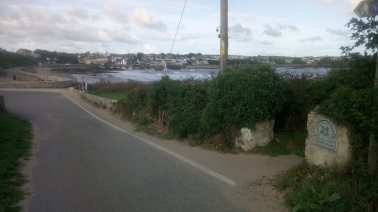 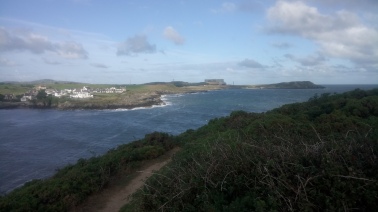 Day Three – outward trek by 60/61 bus to Llanfwrog, brilliant and very helpful lady driver and 15 mile walk back to Cemaes. No apologies for the number of photos – the scenery was compelling, if not sometimes a bit steep to climb. 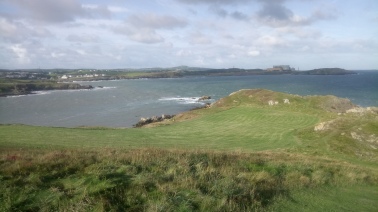 and now as the route unfolded back to Cemaes I’ll let the pictures tell the story – how can I leave anything out ? The coast, weather and sea views were fantastic – only my legs were a bit suspect… 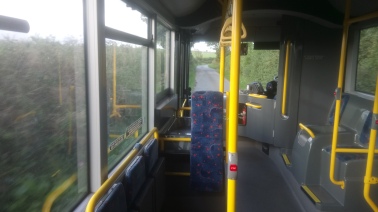 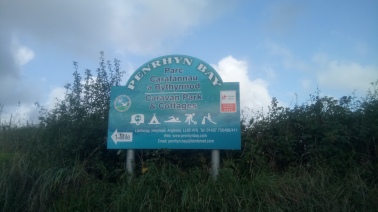 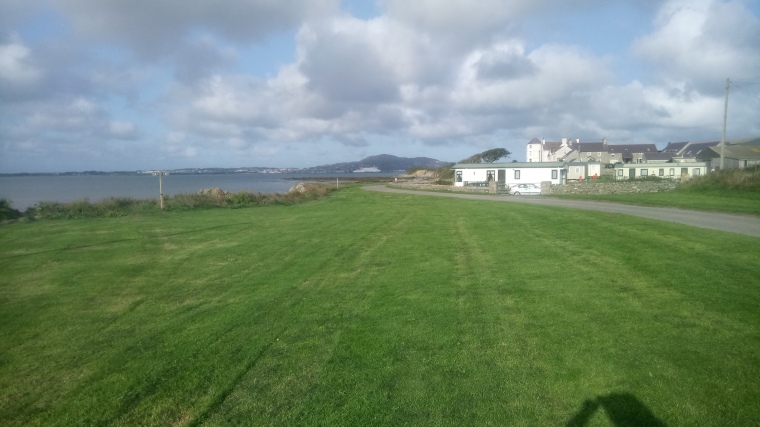 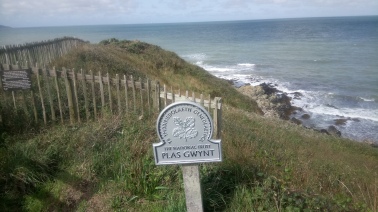 Arriving at Swtan via many National Trust properties and ………. 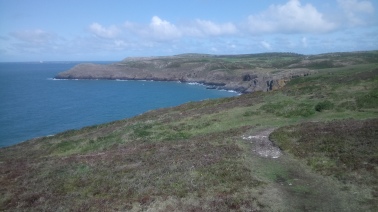 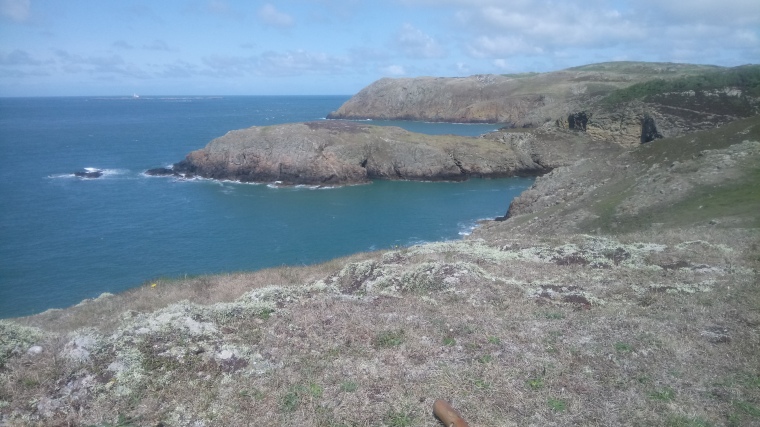 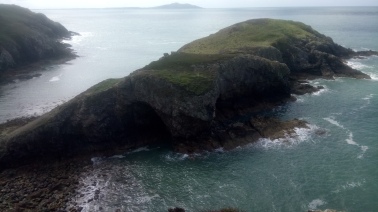 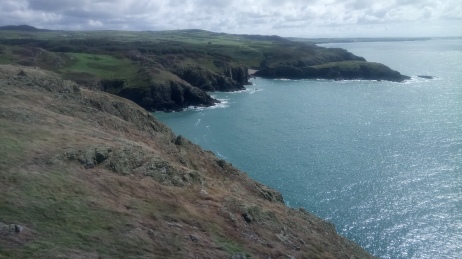 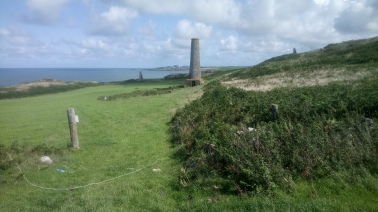 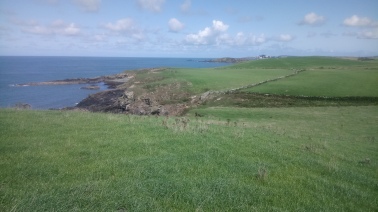 Old mining paraphernalia of towers shafts and chimneys scattered along the Angelsey coastline now making way for modern obsolete power stations as Wylfa first phase is de-commissioned and the second phase is being prepared.

Exploratory archaeological  excavations proceeded. Presumably so, as accompanying vehicles parked close by  heavily advertised their occupation. This was isolated but not apparently being done on the quiet as many personnel combed the grounds clad in Hi-Viz from head to foot.

Eventually after 15 miles walked from Penrhyn I arrived back with ZUD in the crowded holiday car park in Cemaes. I quickly decided it was time to go home as a venerable camper van seeking a pitch for the night practiced an in/off technique of parking via someone else’s front passenger door.

It’s crunch time. Next time out I’ll be car-less and carrying my tent. Will it be the brand new Lightweight one man version, or the existing heavier two man tent.