Warning – This is targeted at Two to Twelve Year olds. Teenagers and Adults may read but watch your attitude and behaviour. There may be stuff that’s beyond older comprehension; if so, consult your nearest child. Or me,   Thank you!

The Crimson Worm Count – down to three – stretch 47 swallowed up 46, as I passed  2400 miles in  total at approximately Heacham.  The longest reaches from Combe Martin, (3) towards the   the northern end of the South West Coast Path, up the west coast to Hadrian’s Wall, across to Newcastle and down the east coast as far as  Cley next the Sea in Norfolk (45). The second wriggles from Maldon in Essex (34), around the Thames Estuary, via Woolwich Tunnel to the south coast as far as Branscombe (10). The Third is content chasing its own tail around The Isle of Wight, (16). The numbers in brackets refer to the Natural England Stretches on the map below.

For me to complete, and hang up my walking sticks, I have  Newcastle to Berwick on Tweed, (56 to 59), Maldon to Cley , (34 to 45) and the rest of the South West Peninsular, (3 to 10).Anyone wishing to join in, I suggest the Norfolk, Suffolk and Essex leg is easiest, and leave the other two for the more adventurous! I reckon about 672 miles left to complete. 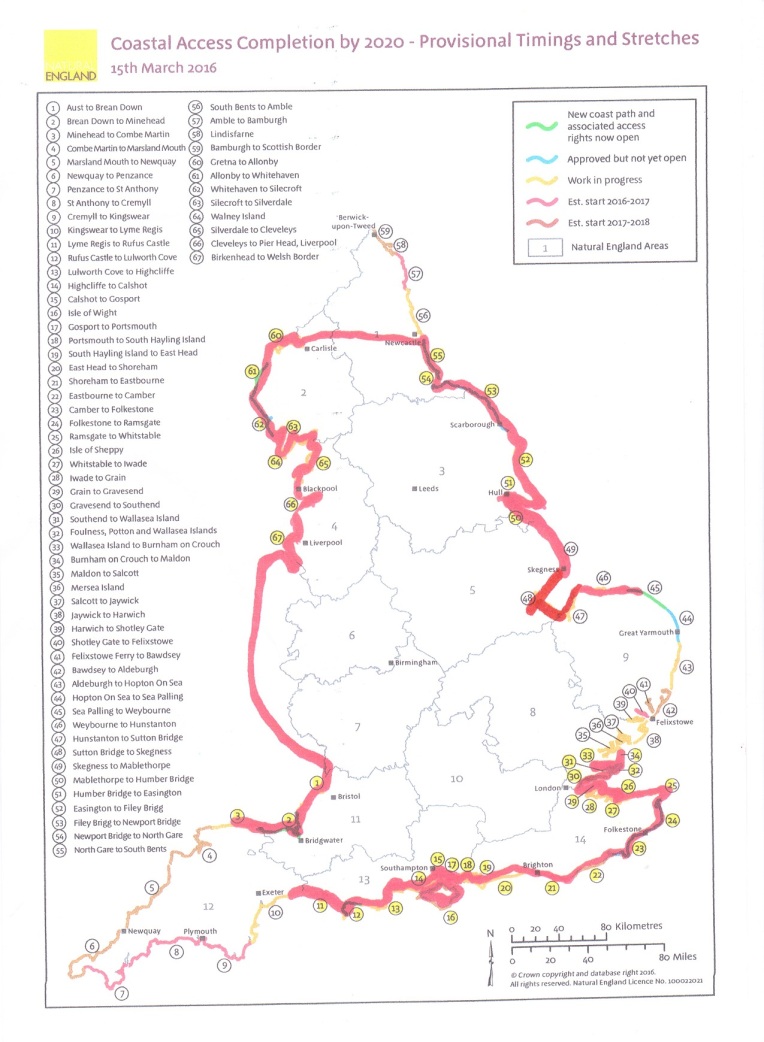 We’re now getting into the end of school year tests, concerts and sports days. It’s the only reason we know it’s summer, ‘cos the weather isn’t giving much away. Anyway I’ve seen some of your various performances and my end of term report is – I’m impressed with everything you are all doing. Maybe the water pistols were a test too far for parents, but then that’s Grandparents prerogative.

This is Episode 63 of my walk round the Coast of England, which I started in November,2013, shortly after completing Offa’s Dyke Trail.

[ASIDE For earlier editions of the blog  REFER  https://rdmaccord.wordpress.com ]

Over this last extended weekend I managed  to meet all of you, Jake and Maisie in Derbyshire,  Stan and Rowan  in Norfolk and Rosie and Lauren  in Worcestershire. That’s a lot of travelling.

By glorious coincidence, which some have previously called serendipity, I discovered Stan and Rowan were going to be in the same Norfolk corner of England, with their parents, so , on the hoof, as they say I amended my plan to walk forever, and allowed myself a busman’s holiday day off – I would go and watch Donald torture himself on a triathlon at Holkham, Norfolk.  Formally known as The Outlaw Holkham Middle Distance Triathlon involving a gentle swim in the lake; a breezy bike ride on the open road and a three circuit  run around Holkham Hall grounds. Now add in the numbers; 1.2 miles for the swim; 56 miles for the bikes; and unlucky 13.1 miles for the run; and two transitions.   After all, this is really good blogging material and shows the tortuous obsession to swim/cycle/run/walk oneself into the ground has touched at least two  generations of our family. Uncle Andy and Auntie Ann are also guilty. I don’t think any of you cousins will escape either..

And so, just a one day 21 mile  walk this time out, to  reconnect to The Norfolk Coast Path; Day number  175; Saturday 2nd July 2016;  walking alongside The Wash from The Great Ouse at King’s Lynn  to The RNLI Station at Old Hunstanton via King’s Lynn Docks,  North Wooten, Castle Rising,  Sandringham, Wolferton, Shepherd’s Point,   and Heacham. Aided and abetted by The Coasthopper Bus and the 505; Ordnance Survey Explorer Maps 249 and 250 and camping two nights at King’s Lynn Caravan and Camping Site on the A47, near Middleton. Copious apologies due for any inconvenience  – more later!

The crimson worms have reduced to three, now the Wash has engulfed  the Norfolk Coast Path. 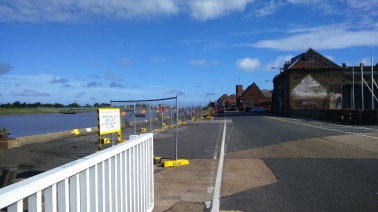 Top Row , The Campsite near Middleton  – very good facilities and  calm and peaceful until 5-30am Sunday morning when my car alarm took off as I was breaking camp! I think I got away with it?

Middle Row; my aide memoire to help me find the car after a day’s walking; and the Great Ouse approaching King’s Lynn, and finally  the quay at the town centre.

The journey proceeds towards Old Hunstanton, with photos taken at about one mile intervals – or more frequently if  warranted.

The Fire Station, North of King’s Lynn on the A1078, warrants it because I collect Fire Stations. Donald, Annie  and Andy used to live in one, much older than this in The Heart of Brum, it used to  house horse drawn fire engines…in the good old days. Subsequently, it became famous for its parties, which only ever seemed to happen when Nanny and Bobl were away…. strange that? And visitors  occasionally let me know they’d already been to my home, beforehand.

Leaving King’s Lynn heading  the north, I had to divert to the A1078, away from the coast line, inland, because after asking directions at the Docks, the security guard said I could go through  , but no one ever did because the path led nowhere, and after that there were no footpaths or signposts. I heeded his advice and spent the rest of the morning trying to get back to the riverside. In vain. 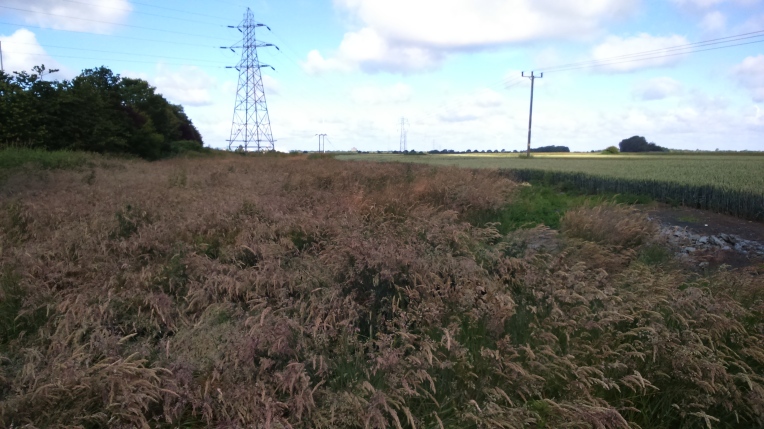 Looking to get off the trunk road and away from the congestion, there was supposed to be a footpath here heading to the old east seabank, but it was all very  recently planted with corn and therefore a self imposed no go area. Farmers win again. A good case for the Local Authority R O W Department.

I carried on along the heavily trafficked main route out of King’s Lynn, fortunately there was a parallel cycle track to North Wooten, through suburbia, so I was insulated from white van man for a while. There is a game going on for them to see how close they can get without actually running me over. 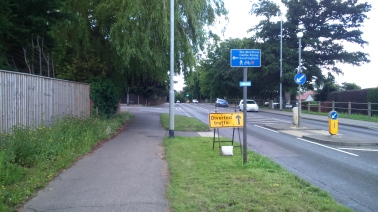 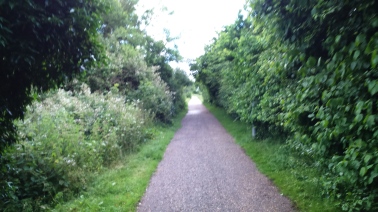 The cycleway route 1, was very pleasant to follow; someone had given plenty of thought to separating the traffic, but unfortunately it all ran out before I reached Castle  Rising. 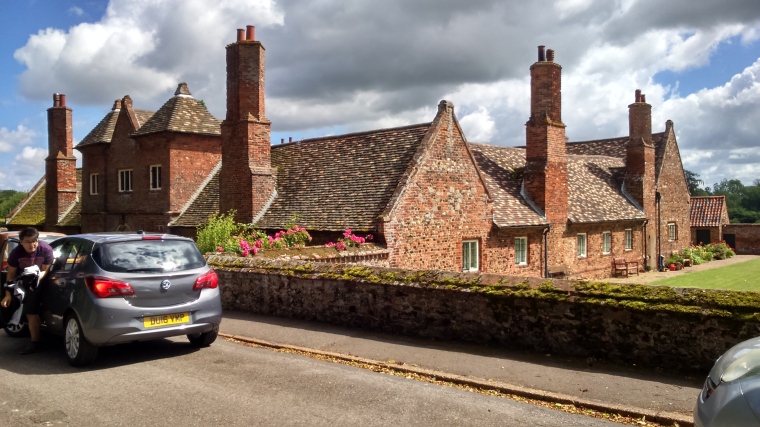 Back on the road again; pedestrians , bikes, cars, lorries and public transport all share one narrow strip of tarmac maximum speed sixty miles per hour. But the view would have been worth it at Castle Rising, (second and third pictures), had not a small car with large occupants  intruded on my chocolate box shot just  as I was taking it.

Never mind , every black lining has a silver cloud, and they were lost, asking me where was the castle , in a North American accent. I consulted the map and might just have sent them off in quite the wrong direction…. 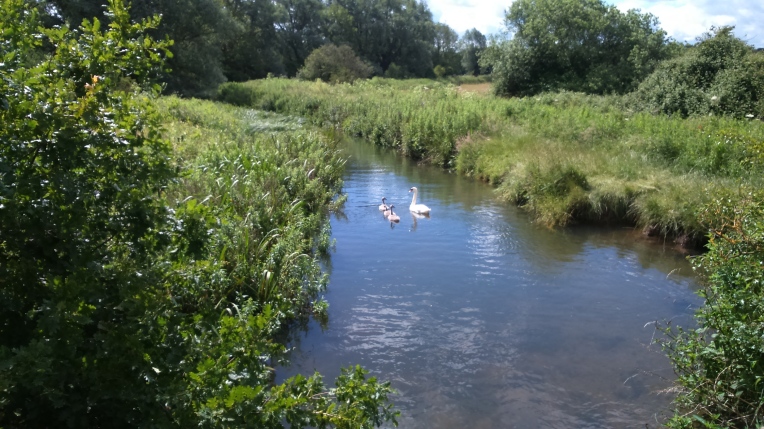 Swan and Cygnets on the Babingly River taken from the A149 at Babingley Bridge, past Castle Rising. 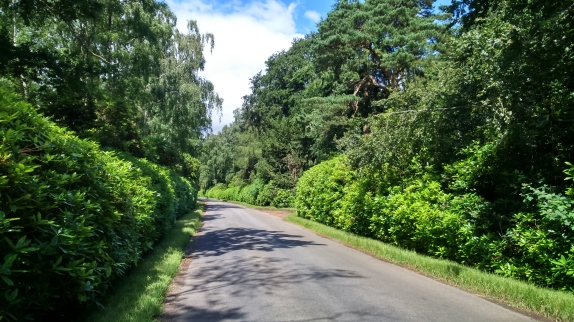 Occasional cycleways but generally lanes with no footpath led me towards Wolferton, with a big surprise waiting. 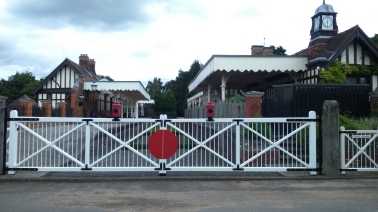 A complete Royal Railway Station, without the trains, at Wolferton. It is preserved just as it was I the sixties, when it served Sandringham and royal visits.

But I’m still well off the coastline. With no direct roads or footpaths. Good luck English Nature when you come to plot the England Coast Path in this region. I  headed directly for the Wash National Nature Reserve alongside The Ingol. It is defined as Access Land on the OS Explorer Map, more notably a bird sanctuary. Other areas were signed as Wild Fowler’s territory – two extremes alongside eachother. One nurtures the other doesn’t.. both are very possessive. 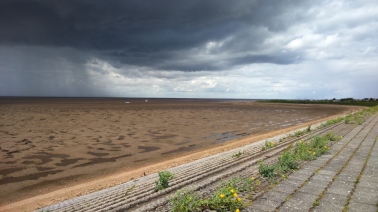 Now back on the coastline that started to change dramatically. Squalls were coming across the Wash and hitting the shore, sometimes unloading their contents on me. Despite the July date , the heavy  rain was extremely cold and soaking ; there was no shelter. After passing over, the sun reappeared and I dried out fairly quickly.  Quite a contrast. 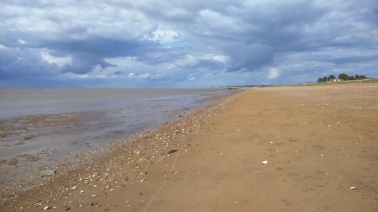 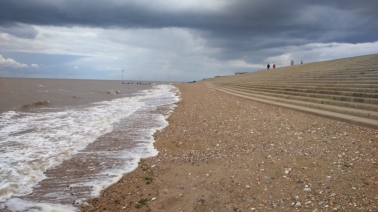 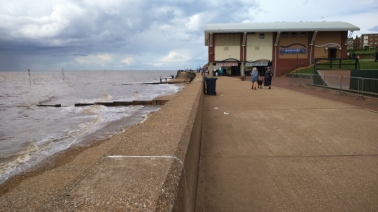 As I progress, alongside The Wash, mile by mile up the coast towards Hunstanton, the tide was coming in covering the vast mudflats……. 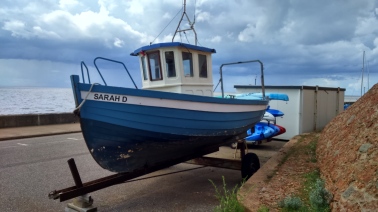 ..and cutting off my progress along the beach, which halted abruplty at Old Hunstanton .

So back to the cliff top promenade heading for the Lifeboat Station.

One of very the few Hovercraft operated  by RNLI  at Hunstanton. Ideal for rescues over the extensive mudflats. I visited the RNLI Shop and added to my collection of souvenirs. Most RNLI Stations have a  gift shop with many useful objects for birthday presents or the like.. The volunteer staff are always willing to show you around and tell of daring heroics they have pulled off.  One of my favourite Charities, together with Help for Heroes and Shropshire Air Ambulance.

By the end of the day, after taking the CoastHopper Bus back to King’s Lynn and the 505 back to the carpark; and the car back to Holkham Hall,where  Stan and Rowan were waiting patiently for World famous French’s Fish and Chips from Wells Next The Sea. Extra patience was needed after Donald joined the World famous queue, but it was well worth it.

And so to my tent in King’s Lynn, to await my early morning call, which I shared with other campers….

Next morning I dried out the tent and packed up – and made an executive decision to watch someone else torturing himself rather than continue my walk. Uncle Donald was nearby at Holkham Hall doing a half Triathlon and Stan Rowan and Auntie Sarah were there too , to support him. So I joined in…. supporting , not competing.  I don’t do swimming, cycling and running. Certainly not all in one day. 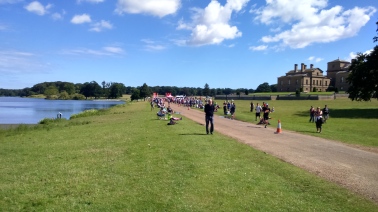 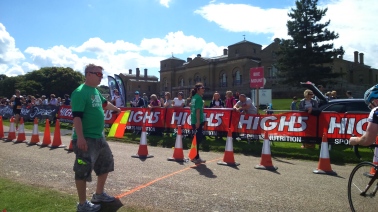 Holkham Hall near Wells next the Sea, is transformed into a swimming, cycling and running centre for the Outlaw Half Tri -Athlon, complete with campsite and childrens’ entertainment.

Donald’s finishing time of 5 hours, 50 minutes  and 17 seconds, outside the medical tent and with family and medal

And so  to stay with Jake and Maisie.And then to Rosie and Lauren. It’s all go!