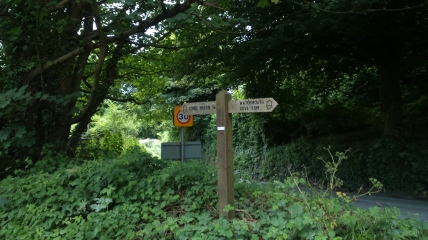 Start point this trip, The South West Coast Path, near Combe Martin , follow the trail of acorns………but  watch the speed limit. Many of the posts and stiles have a grid reference inscribed on the white disc. Very helpful.

And also very helpful was Mark with his Walking Card for me to offer in response to queries about my walk and blog. In return, I am continuing my search for the perfect fishing boat setting for him to reproduce in water colour. At present I am trawling my photo library for suitable pictures – this may take a little while, since I believe there are about 10,000 pictures….. filed randomly….

Taking the form of a letter to our Granchildren, various ages two to twelve, this is the latest in a series of blogs entitled “Still O England” recording my walk round England’s Coastline with added  Hadrian’s Wall and Offa’s Dyke included to complete the circuit, as it were. I operate on several walking fronts and can choose where to renew the walk, but usually only when I have recovered from the last Episode; that is  walking and writing it up; both take their toll; one physically and the other mentally.

“StillOEngland”  took over from  “OEngland”  at Episode 59 – refer https://rdmaccord.wordpress.com  for previous Episodes. Also containing the rules and The Anthem and reasons for doing this.

My route blue print  for the walk is Natural England’s  Pr0posed  England Coast Path, anticipated ready for strolling in 2020. In the meantime, I am ploughing my own furrow, using their provisional route, shown below. The crimson worms indicate my progress to date, which I estimate to be about 80% complete.

The map  can be supplemented by English Natures Regional Maps eg

ECP-south-west-map July 11 2016A      Click here to show the Natural England’s intended route for the England Coast Path in the  South West. I have nearly reached Barnstable to the North and beyond Lyme Regis on the South Coast. Only about 600 miles  to go on the  original South West Coast Path.

When I am suitably rested and ready to walk again, I can select where to start again from five active fronts on the English Coast; namely Newcastle,Norfolk, North Essex and either of the South or  North  Coasts of the South West Coast Path.

Weather forecasts, prevailing winds, tide times and availability of Nanny as full time back up, and therefore use of hotels, all came into the selection process.

I  chose, this time,  to continue my walk around England on the very last front mentioned, the Northern section of the South West Coast Path from Combe Martin  on the North Western tip of Exmoor. I  headed for Ilfracombe, Bull Point Lighthouse, Morte Point, Woolacombe, Baggy Point, Croyde, Braunton Burrows, Crow Point finishing short of Braunton at Velator Quay.

No buses or trains this time – Nanny is taxi-ing me everywhere – even Porlock Hill.

My previous Grand Total Miles walked was 2404 with assessed 672 miles to the finish.

In three days, 176 to 178, Saturday July 11th to Monday 13th I aggregated 30 miles horizontally and struggled several miles vertically and longed to be back on Norfolk’s flat terrain. It’s all recorded on O.S. Explorer Maps OL9  and 139 in pink, and further etched and  enscribed in Cyberspace by courtesy of   Nikes GPS Sportwatch, which records every detail, provided I switch it on , or off, as the case may be. This acts as hard evidence that someone is out there walking the English coast wearing my watch, while I sit in the nearest pub writing the blog. You’ll never know! Get in touch   rdmaccord@outlook.com if you want details of The Nikeplus Site. I can’t believe some of the places I’ve been.

Now for a touch of drama – I’m not sure I’m going to finish this .Brexit, Arthur Ritus and other recent family interaction with The NHS has thrown up timing difficulties with completion of the challenge. Why didn’t I start ten years ago?

Nevermind – I’m  certainly not giving up – but you cousins might have to entertain the possibility of pushing me round the remainder of the course in a bathchair….. so get training!

Footnote – A Bathchair was the forerunner to the Sinclair C5…..

Signs of the times – the universal acorn; No Dumping – really?; National Trust Golden Cove; and last known view of my O/S Explorer Map 139, which may still be hanging there. Fortunately, I found a replacement

The South West Coast Path or Tarka Trail clings to the cliff edge or follows the A399 via Sandy Bay, Golden Cove, Small Mouth, Watermouth Harbour, Watermouth Castle Theme Park and Samson’s Bay through the foliage, back on the trail again…….. 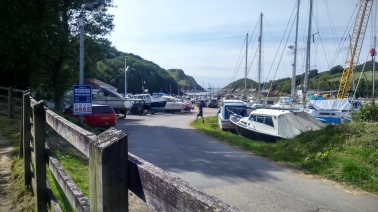 ……………….and looking back on  Watermouth Harbour from the path around Widmouth Head. 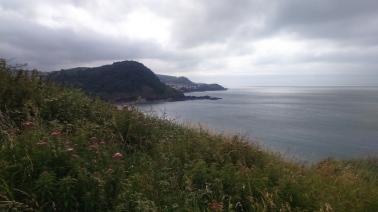 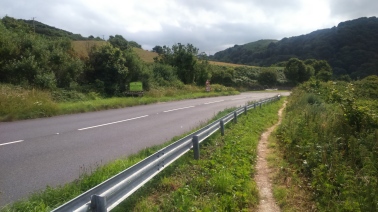 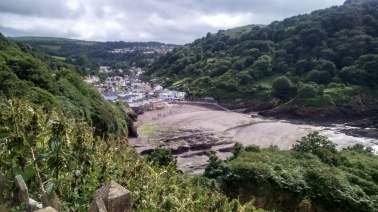 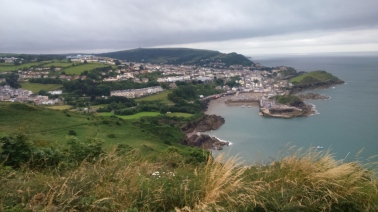 Top left -Ilfracombe in the distance; top right the A399 is protected from walkers by Armco barriers , walkers get what’s left –  but the views are worth it;  firstly Hele comes into view and then Ilfracombe  outer harbour; and finally the inner harbour with the tide out.

Time for a beer and fish and chips from the harbour shops and a good look at Verity by Damien Hirst.

Next Day, following a night not under canvas or goretex, purchase of a new map 139 complete with mobile download, Nanny dropped me off a the Museum to pick up the trail out of Ifracombe. The curator, even at that early hour on a Sunday, managed to put me on the correct trail out of town. 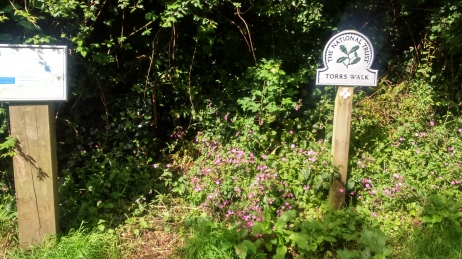 Leaving Ilfracombe; the kilns of the Museum;  the notice says it is Ilfracombe and names the church Emmanuel and the gardens Runnymede; one of the occupants wasn’t going anywhere; and The National Trust owns Torrs Walk which is my route out of town; and looking back proving it is me behind the camera. 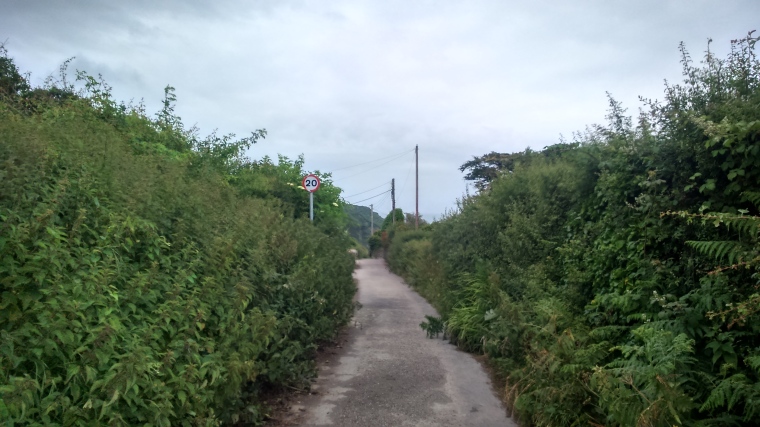 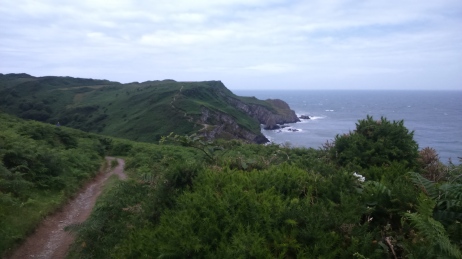 Back at sea level, Lee village was the designated coffee stop but  nowhere to park for the back up vehicle, so up the steps to Damage Cliffs, clinging to the cliff edge again until reaching…….. 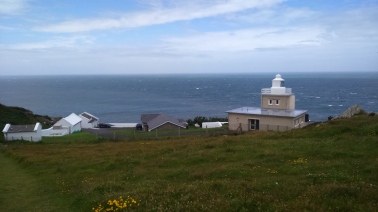 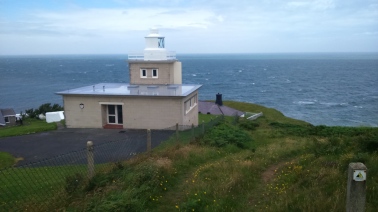 …the lighthouse at Bull Point, the graveyard of hundreds of vessels. It was built in 1879 but rebuilt in1972 inland after a rockfall 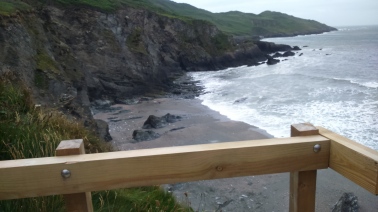 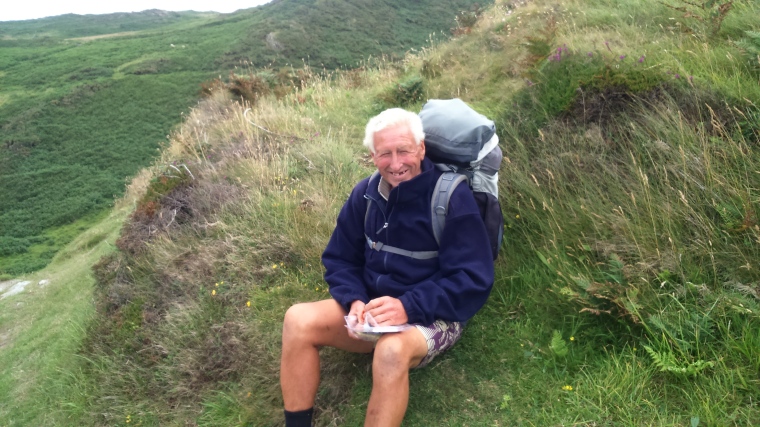 Access to the beach at Rockham Bay and later I met  61 year old Malcolm in the middle, always on the fiddle. He said he’d been on route from Brighton via the South West Coast Path for ten weeks, heading for Bristol. He said he had only eaten water in the last week! He seems quite happy holding my trip rations, sliced meat, cheese, figs and nuts. 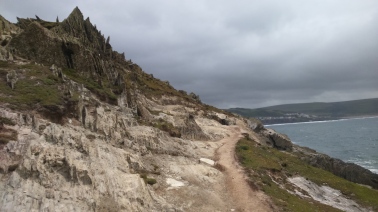 On the way to the very rugged Morte Point and round the corner, at the aptly named Windy Cove,  heading for Woolacombe where I can replenish my stomach having missed my coffee break and lost my grazing rations to Malcolm.

The Cavalry arrives with food rations. 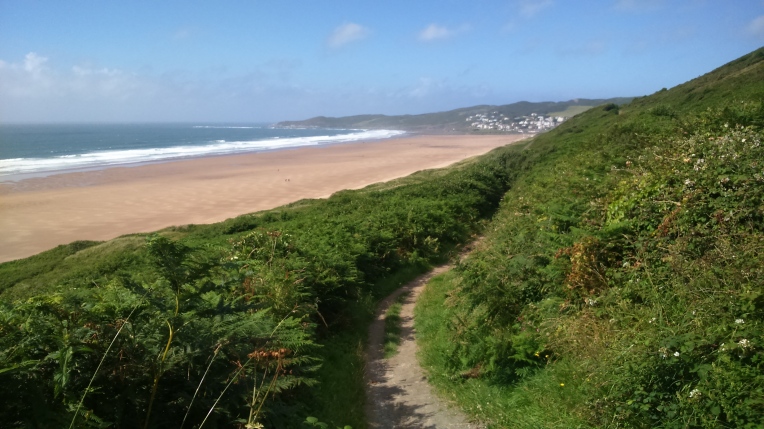 Woolacombe Sands  from the Putsborough end of Morte Bay 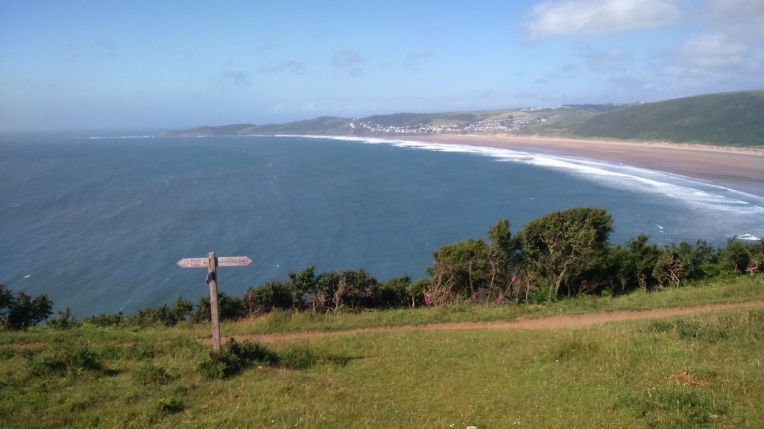 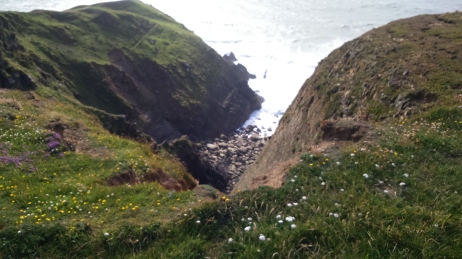 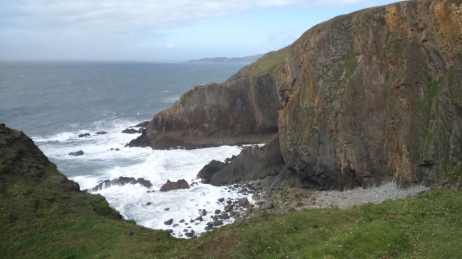 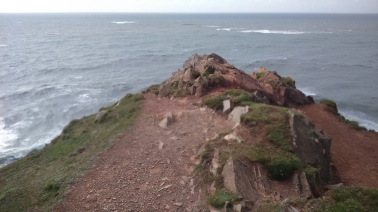 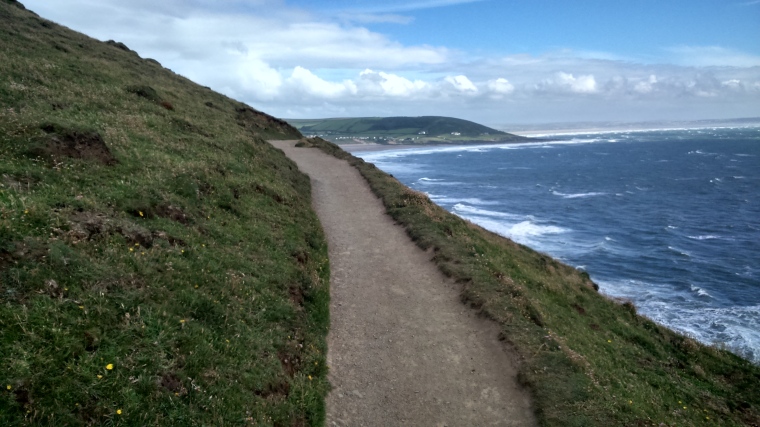 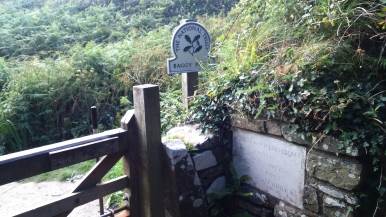 Leaving Baggy Point and making my way to Croyde Bay where Nanny was waiting to escort me back to the hotel after walking  15 miles, up and down and into the wind. 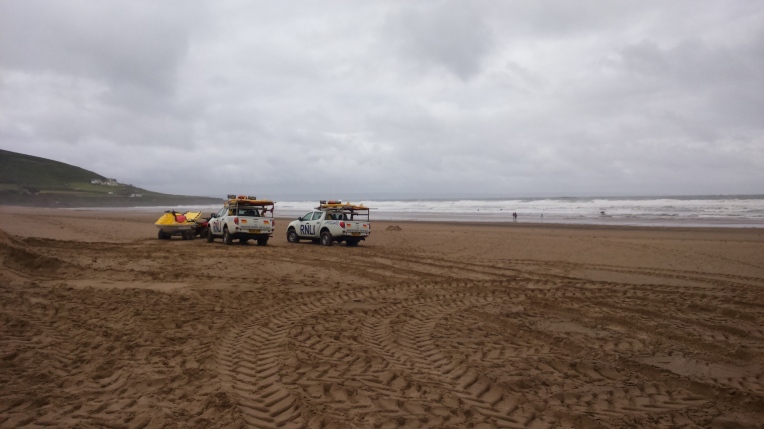 Next  morning, back to Croyde Bay, with the RNLI setting up their Lifeguard patrols for the day. 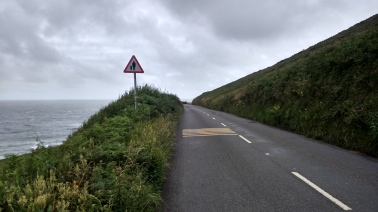 Three miles from Croyde to Hannaburrow Lane and next back up rendezvous was characterised by the trail sharing the B3231 with traffic. I preferred the wind and rock climbing of the previous walk. 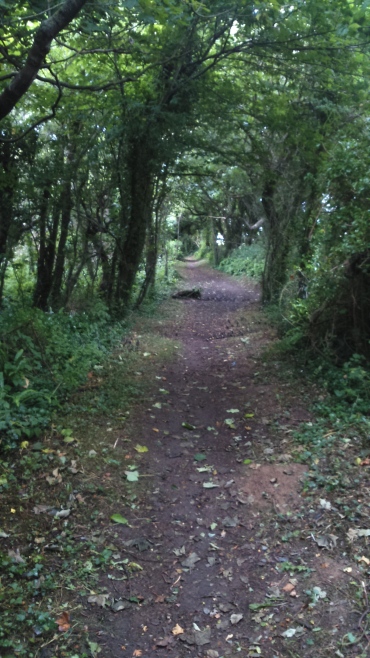 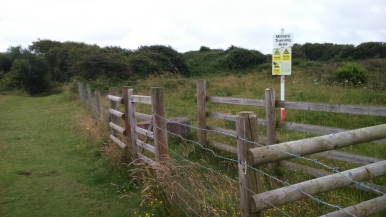 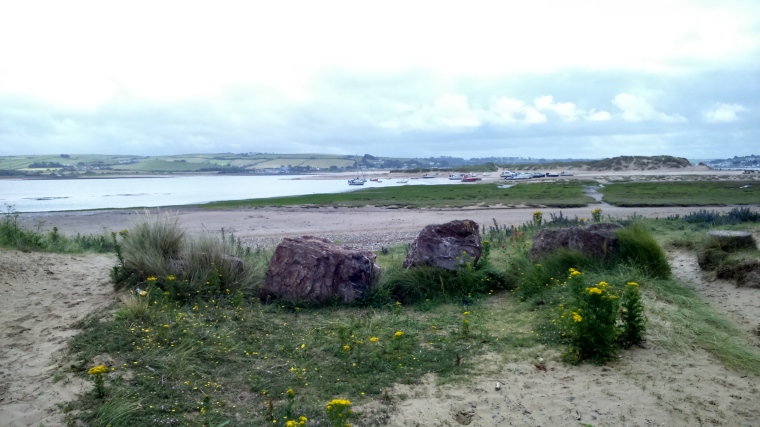 The next few miles alongside a golf course and then a military range took me to the River Taw and Crow Point in relative safety.

Leaving the Military Danger Area behind and walking along the River Taw sea defences until the Caen River and finish at Velator Quay , where Nanny was waiting with more rations. Nine miles completed this morning

After our picnic lunch we set off for home, via Rosie and Lauren’s home.   To rest and recuperate in time for Stanley’s next performance as the Owl in ‘ Alice – The Musical’