Let me explain to the uninitiated what’s going  on in the pictures below – Christmas has come and gone – maybe because there’s evidence been forwarded to Santa, that you all beat up Bobl,  but really ‘cos Jake and Maisie are doing a Brexit to NZ, to intercept Santa on his Southern Hemisphere route. I suppose they are going home really, as Uncle Andy was born in Takapuna . We also hear rumours that they will return to these shores in the New Year with a new family All Black, named Cassie…..Flash is no longer Top Dog. 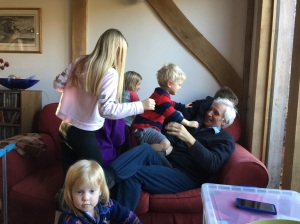 So, last week, we had an early Christmas at Stansbatch and the Mill. Actually you are all in the crime scene; Stanley’s bogbrush hair can just be seen behind Bobl ; and Rosie’s mauve sweater  is visible behind  Lauren; Maisie is lookout and Rowan and Jake are sneaking round he back.

At the Christmas Dinner Table, all the kids were lined up against the grown ups and Bobl; what are Jake and Stan conspiring about?; Aunty Caroline is blocking any escape .         Scroll to the end to see the full ensemble…..

I don’t know how Santa manages every year, but diverting Christmas present takes a lot of effort , and walking went out the window for a month, but last Thursday, 8th December , I felt the need to walk off the pounds to make room for the real Christmas future, in two weeks. Actually what has happened, is my auto-gyro has kicked in and psychologically I’m in the depressed post-Christmas phase that lasts all winter. Another Christmas Day dawning meant a strenuous visit to The Suffolk Coast Path would banish the gloom. 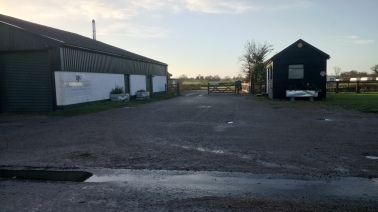 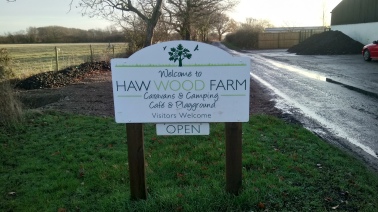 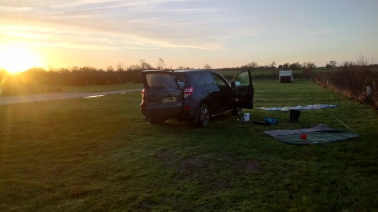 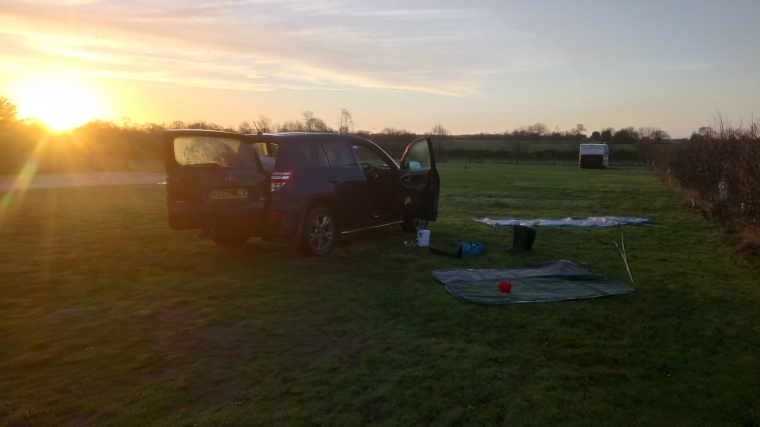 Haw Wood Farm Campsite – I only ever arrived in darkness – and it was a while before the hospitable owner tracked me down – the pictures show a very sodden tent  on the fence drying out awaiting sunrise on the final day stay.  Blustery conditions at night gave rise to fears of who was prowling around the tent……spooky.

And so it came to pass, I returned to Crazy Mary’s Hole near Pakefield  and pitched up at Haw Wood Farm, near Darsham; an excellent establishment but I was one of only a very few occupants , which gave an extra frisson to the ghostly activity by Crazy Mary and also the Black Shock infamous for haunting and  prowling the countryside. Too much information from HWF Campsite in that splendidly unavoidable advertising position , just above the urinal, was a notice giving the heads up on the spectres frequent sightings. How I managed to complete my visit to Pakefield in torchlight, through the sand dunes without disturbing either  poltergeist remains a mystery, and probably slightly foolhardy, if they do exist. The hairs on my neck are currently tingling. I don’t rule anything out. If I’m walking every last yard of the English Coast, then I expect something inexplicable. I experienced something sinister as I approached  the Scottish Borders, near Bowness on Solway; at the time I explained it away as Nicolalex  spitting venomous invective at the Sassenachs. Or was it the Whisky….?

Come on, Author get back on track; Sorry – below is Natural England’s Map of their proposed England Coast Path.

To complete my circumnavigation of England’s coastline, I have to walk stretches 5 to 9 and 38 to 42 and finally 56 to 58.  Estimate  about 450 miles , single. But could be much more if I take a return, as happened with most of this last walk on the Suffolk Coast Path. I only ever do a return (circular) walk if there is no transport to carry me.

Summary of this walk.

Over the four days Thursday to Sunday, 8th to 11th December, walking days 205 to 208, the weather was so mild, I achieved 41 miles in a circular fashion, from Pakefield, Pontins Holiday Camp to Kessingland, via Benacre National Nature Reserve to Southwold, crossing the R Blyth to Walberswick following the Dunwich River to Dunwich  and past the National Trust Coast Guard Cottages  at Minsmere Cliff and Nature Reserve finally  running out of energy at Sizewell Nuclear Power Station. Next time out I’ll be passing Aldburgh and trying to navigate Orford Ness.

The story in Pictures….. 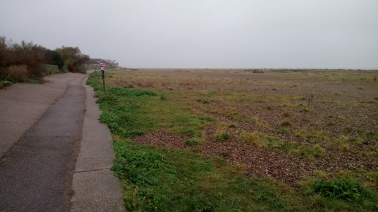 The Suffolk Coast Path sometimes follows the shoreline as here at Kessingland Beach by way of a formal path , or grassed areas or sand dunes. But often the trail diverts inland  as at the Benacre National Nature Reserve, where fragile shallow cliffs  make beach walking more adventurous. I kept unswervingly to the beach, hoping the tide didn’t come in too quickly! 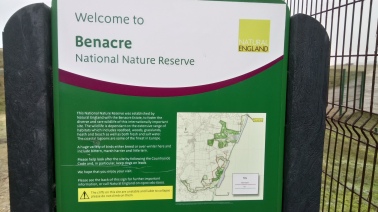 The cliffs are constantly eroding, nothing stays put, this WWII Pillbox got upset and had a headache, and the trees are following suit; the tide was well out and walking was kept well away from the cliff base. Meanwhile I appeared to be under observation from a vessel keeping up with my pace. Crazy Mary? The story goes she is looking for her shipwrecked fisherman husband and is often seem about nine in the evening wringing her hands with anxiety…. about the time I was trying to finish my walk into nearby Pakefield. 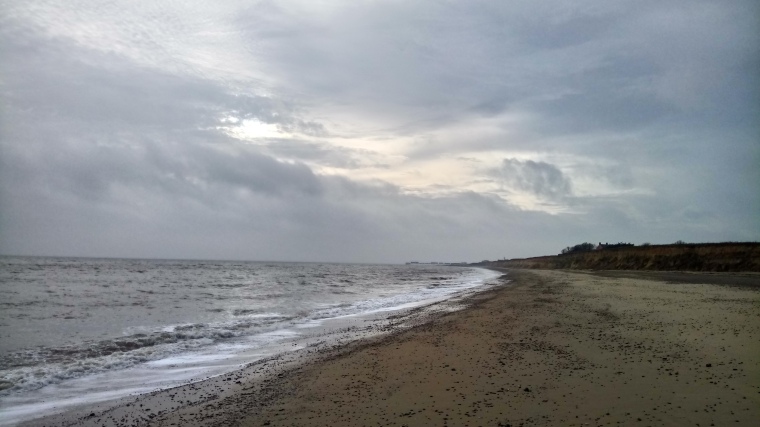 More trees falling off the edge followed by housing complete with underground services.

A special on Southwold….. I was quite taken by Southwold and voted its Pier World’s best so far visited – fascinating and understated. And its connection with George Orwell, is exploited on the Pier wall, Murial! His parents lived here, and his early life and time in his thirties were passed here. 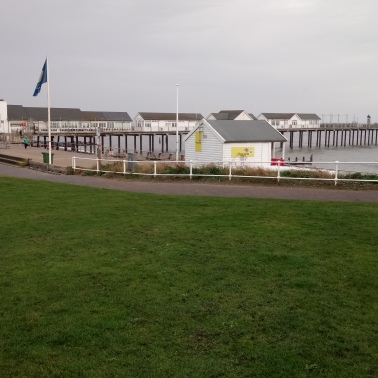 From a distance the Pier is like any other but maybe a few more buildings – on closer inspection it was stylish and the occupants were upmarket – quite a surprise. Even the slot machines were something different ….but the camera was having an off day. I think the mirrors threw it a wobbly.

A rude Water Clock that was electrically powered and performed on the half hour – nearly – camera wobble again. 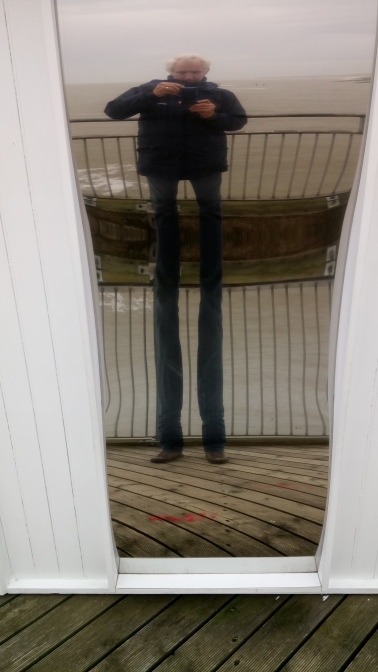 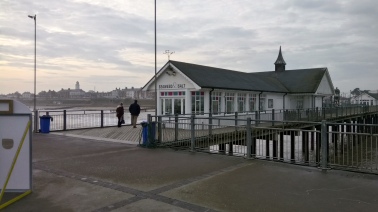 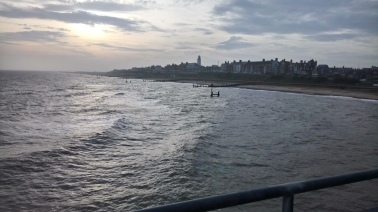 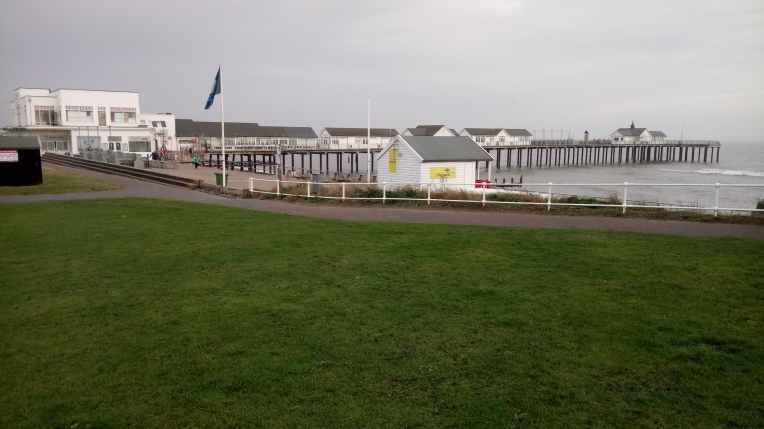 One final look at the complete Pier before……..

….looking round and about Southwold  and its defences…. and fetched up in Southwold Harbour heading for Walberswick on the other side of the River Blyth. 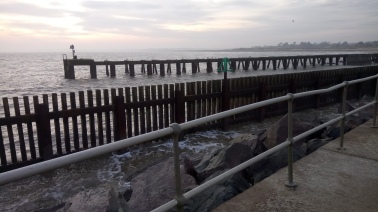 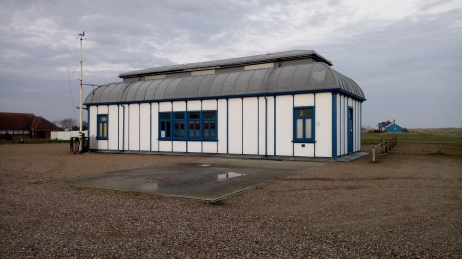 The Harbour entrance and associated eclectic buildings for the RNLI Station and the museum with a pleasure boat office but no ferry until March. But a mile  walk through the boatyard hard would bring me to …..

…… a very alternative crossing heading into the sunset. Judging from the sun’s position, I’ve got about an hour to tour Walberswick  and return to the car in Southwold Sailors Home, before nightfall. ( I’m fearing meeting Crazy Mary again) 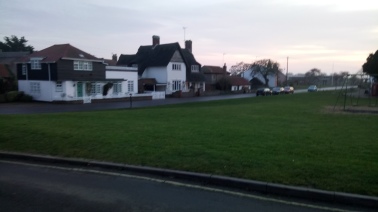 The Home is really a pub – I just about did it. 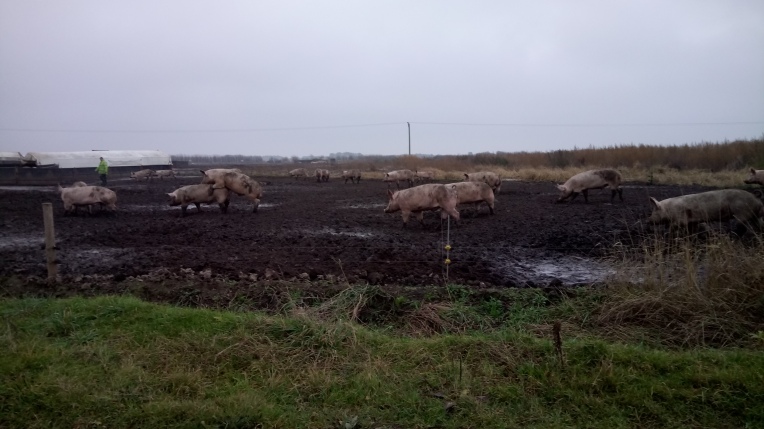 Next day on my way to Dunwich, I discovered thousands of pigs, some of whom got the hump. 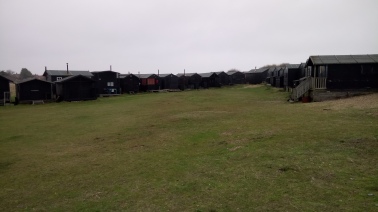 The mudflats and saltmarshes of the Blyth Estuary are internationally reknown for the National Nature Reserve and enormous variety of birdlife. And finally numerous lesser spotted fishermen occupy their measured pitches in a sea fishing match. I believe bodily contact is frowned upon, but the atmosphere was tense.. 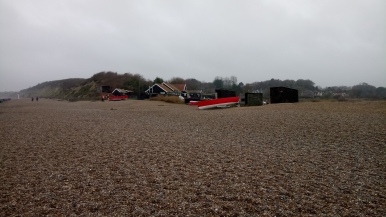 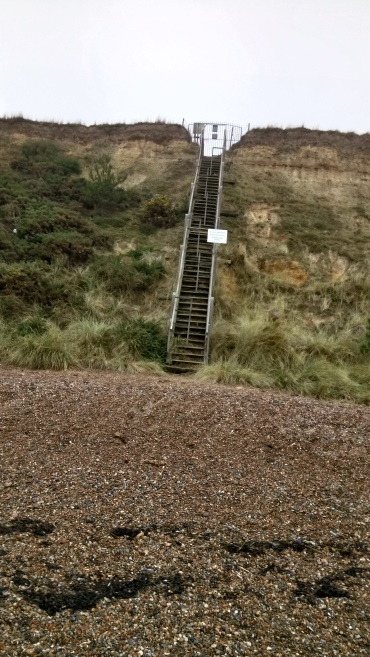 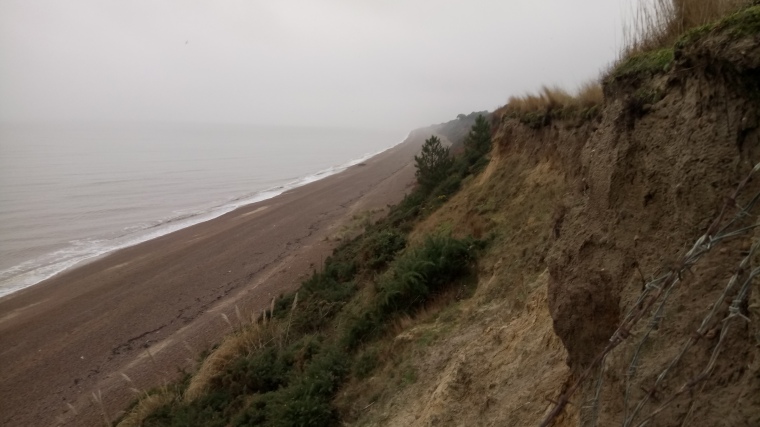 I left Dunwich via the beach heading for Sizewell, it was tough walking on the loose shingle, but the tide was low and I found firmer footing at the low water mark. I met no one doing the same journey – isn’t Sizewell very popular? The cliffs were eroding and investigating at the locked top gates I found many abandoned caravan sites on edge. Together with the Nuclear Power Station  and shifting coast line, it’s not got a lot going for it.

National Trust’s Dunwich Heath, Coastguard’s Cottages and Barn complete with toilets,  café and shop all of  which I used. 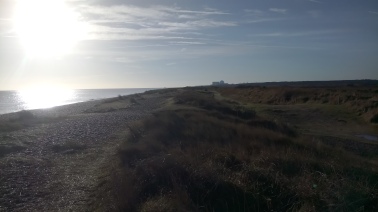 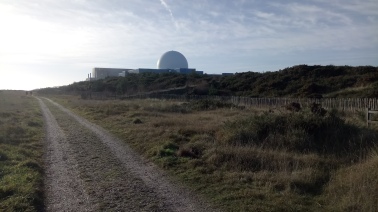 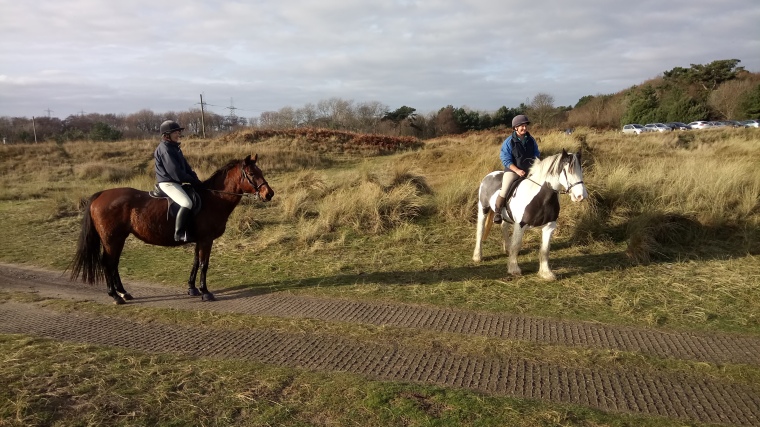 Memories of Sizewell Power Station. A welcoming notice.  And a special mention of Buses 146 and 99 both of which reduced the circular walking considerably. The horses were Apache and Dewy.They were full and seemed to be going anywhere they wanted to..

See you next time – probably next year?