The Crimson Worms have reached Mouthmill Beach to the North and Mothecombe to the South. Which me will get to Land’s End first?

+Clovelly; the harbour, the  steep cobbled lanes and the sledges used as transport up and down and the RNLI slipway.

In the last week we have managed to see all of you and get a pre-taste of Lauren’s birthday cake and a foretaste of her being a ten-ager. Happy Birthday Lauren! Well done Rosie in your tests – all you have to do now is whatever you want! Stan has been climbing higher mountains and Rowan has been counting to enormous numbers and still going. We checked out the  Peak District and find Jake and Maisie well recovered from their visit to your NZ Cousins.

Are you sitting comfortably?.

Then I’ll begin the very wet story of me passing the 3,000th mile on my walk round  England’s coastline, at Clovelly on the Northern side of the South West Coast  Path. I was last here in September just gone, when I finished at Horn’s Cross on the A39. This visit I left my very wet campsite at Hartland Cross and after parking up at Horn’s Cross squelched my way four miles to Buck’s Cross  and returned to the car via bus route 319. And a complete change of clothing. The next day was similar only advancing another six miles to Clovelly. It was just here that the 3,000th mile of my complete journey was about to tick over; so I paid the £7 to enter the private village and celebrated with a large cup of free trade hot chocolate, my mistake, it wasn’t free – far from it – it was all but 1p short of £3. I spent a slippery two miles slithering up and down the tortuous cobbles and visiting Clovelly  Harbour. I found the extremely steep back door exit to the harbour and laboured my way uphill hoping a passing motorist would take pity. I was obviously too wet.

Eventually, in need of oxygen, back at the heights of the Visitor Centre car park , I bumped into Tina,  patronising  the rubbish recycling centre and I  enquired about buses  back to my car.  Better than offer directions she offered me a lift in her van, despite me leaving pools of water wherever I sat down.   She kindly offloaded me at Buck’s Cross Post Office  where hot drinks were half the price of Clovelly and the sticky buns were too temptatious.

The Post mistress was clearly antipodean; having arrived here for six months some 40 years ago. I paid the ultimate insult by accusing her of being Australian. It is the worst thing you can say to A KIWI!   It was compounded by me admitting my Naturalised Kiwi Status, Dreadfully sorry Dale!  Thank you for letting me rest awhile and sort of dry off. But I did frequent  the PO Stores several times after that.. We must look after our remote Post Offices.

Having amassed only 12 miles in two days I determined to add as many miles as possible before heading back home on the third day. Everything was soggy – I was on my last set of waterproofs and the tent drying out in Vera was making everything else damp.

Fortunately the last day was clearing and eventually the sun shone and a drying wind helped me reach Brownsham Cliff and Mouthmill  Beach. Some very steep climbs and descents and slippery too. But the clear views at last repaid all the damp effort so far expended. But I was totally drained  And I now had to retrace my footsteps. Time to go back to Vera. No transport – no Tina  – no donkeys. And the hills had got very much steeper on the way back.  Back at the car. Sneak into the visitor centre and use the toilets and head for home. Can’t afford the free trade coffee. And I noticed I was very, very muddy!

You’ll notice a lack of photos – it was too wet – I was too wet; too layered up to go delving for the camera at every/any photo opportunity. Maybe I’ll be back next time when the sun’s shining.

Tina’s van, my transport  from Clovelly to the Post Office at Buck’s Mill supervised by  Dale. Maybe it’ll stay dry enough to get mugshots of Dale and Tina next time!

Leaving Clovelly I was mugged by two ruffians, who ran off when I said I had no food. 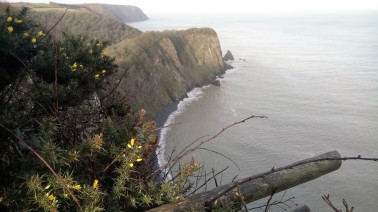 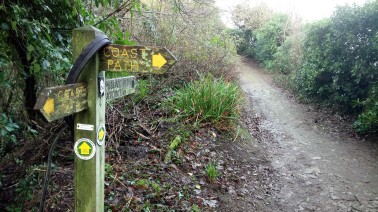 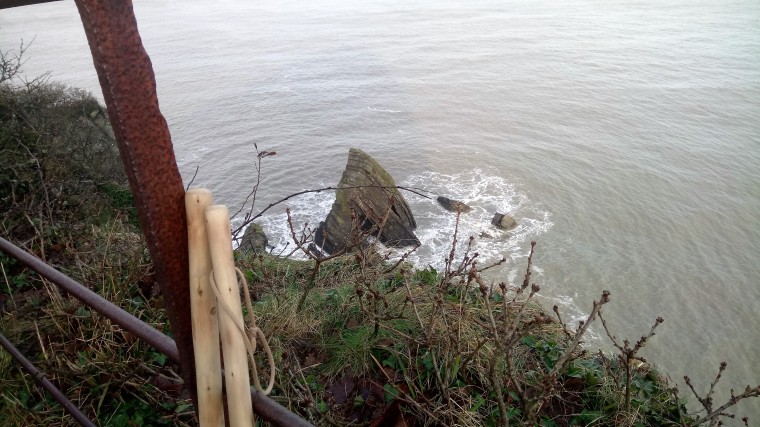 Approaching my limits -more  foul weather was forecast so I cut short the journey at the next stile.  Signposted Windbury Point 1.25 miles/Mouthmill 0 miles.

My start point next time out.