DISCLAIMER – This blog is aimed at intellects from two to twelve years old, but any adult may attempt to understand if accompanied by a child.

I have  walked over three thousand miles around the perimeter of England since  I  retired, probably in November 2013. Although some may say I retired in 1959, the year I left Earls Hall Junior School. The map below shows how much there is to complete on the South West Coast Path.  Specifically, from near Hartland Point on the Northern Coast  to Fowey on the Southern Coast . Elsewhere,there are several loose ends ie Plymouth to Looe; Clacton to Orfordness,  Newcastle to Berwick, and the odd River crossing, to colour crimson before I can claim a complete circumnavigation. I wasn’t trying to cut corners; those unexplored coasts got neglected because of the ravages of time, tide,  weather, erosion, poor planning or just getting lost. Fear not, I will return to them and all should be complete by my 70th Birthday in  November, 2017 when the tour finishes at the end of Southend pier.

Maybe see you there?

The map below, by courtesy of English Nature, shows my progress in the South West ….

Walking 41 miles from Mothecombe  to Charlestown on this last visit to the  S W Coast Path has  made the Southern Crimson Worm favourite to win the race to Land’s End. The Northern Worm has slithered to a stop approaching  Hartland Point. But The South is in danger of disqualification by leapfrogging the stretch from  Plymouth to Looe – frogs like to eat worms!

You all have your moments and provide unlimited entertainment for grown ups, but look what happens when oldies get together and venture outdoors in stupid weather and slippery mud, when they should know better and be tucked up inside with their Bovril, Horlicks, and Werthers.

This is the tale within a tale of  a Mill Owner, the Millar’s Wife, a Retired Magistrate and an Entrepreneurial Bookseller, all aboard the Stagecoach Vera, wetting themselves  on the South West Coast Path looking for an alternative to Brexit. Instead they found the local inhabitants light years ahead already wishing to cast Cornwall adrift and claim a Unilateral Declaration of Independence.

Bobl, Nanny, Elizabeth  and Henry,with a combined age far higher than Rowan can count met up at La Palais d’Henri near Fowey. I have previously extolled the virtues of this excellent staging post, and put it on a pedestal up to which  all other campsites should aspire.{ Note never end in a preposition no matter how clumsy the grammar.. why not?.} 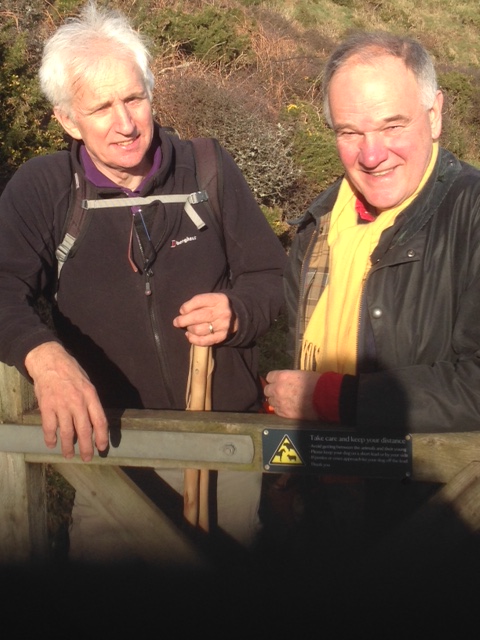 The Street Bookseller trying to offload D H Lawrence Classics to the Millar, who can’t read, nor write judging by this account………

After these few days camping indoors, [my tent can actually be erected on one of the beds] the pedestal must go higher, I can only say that Henry’s ‘ospitality exceeded all known civilised bounds, even when taunted by Elizabeth into realising he’d missed certain rites of passage in his childhood. This was evened up by said Elizabeth throwing a hissy-fit (not rhyming slang) when Henry challenged the collective navigation. This was all sorted out with lashings of cold coffee, Cornish pasties and cakes, ferried in by Nanny in VERA (aka RAV4)  in back up mode.

….Now, he’s up before the beak for walking three miles less than scheduled. Transportation the only sentence available.

And The Beak wrote a ‘pome’ to celebrate. The rest of the World may not be ready for this, but here goes.

All along the coastal path

Through the muddy squall

Stout boots, poles and all.

Maps out, decisions made,

Pork pies out of sight

until we made the river.

Nanny should get the prize

for finding us together,

but enjoying the fine weather.

And magicked off the rain.

Who knows what the future is?

Will Bobl finish on time?

Will we be in Cornwall?

Or Newcastle under Lyme?

It’s going to be great,

And I am sure that we will be

Heads down, poles up, with lots to see.

We went through the whole gamut of emotions, with hysteria dominating, and I have ,without doubt, prior to the walk completing, already nominated these last five days as the funniest yet. Also the wettist and slipperiest.

Because of the leapfrogging, my natural propensity for letting anyone else navigate and being shrouded in low visibility, I rarely knew where we were and the photos that follow are not  in any particular order. Nevertheless I have captioned some without necessarily being correct, but my future publishers would probably require that. No one ever checks?

So without further ado lets cut to the pictures- some of which are still damp. Some days I didn’t even get the camera out, it was so wet, but generally the scenery was stunning it didn’t matter where you focussed, it was bound to be an exceptional exposure. Talking of exposure, on my final descent into Looe I entered a low front composed of hail and sleet  of the coldest variety and was   freeze dried before I could don my wet weather gear. Then it cleared to reveal the bluest of blue sky, I have ever seen in Britain. Almost Brisbanesque.

The journey to Mothecombe Coastguard Cottages and ferry slipway, where the walk was to resume, was rudely interrupted by a fallen tree across the road – giving us a flavour of the weather to come. So  a premature start for me and a reversal for Nanny.

Eventually I arrived where I left off last – the previous freezing wading episode across the River Erme. This time wading is not necessary and I can begin the walk along the S W Coast Path reasonably dry – but not for long. 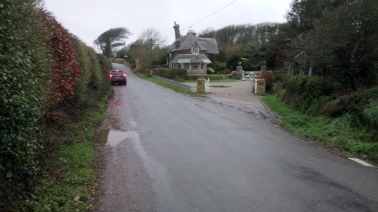 Heading towards Eastern Lodge, Stoke Point and looking back at where I’ve been 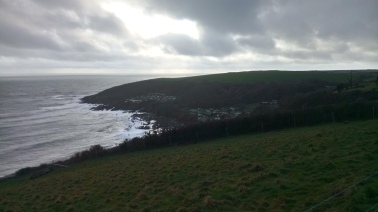 The weather is changing, it’s getting darker and later and I missed the rendezvous with Nanny and Vera.  Last known point Stoke Point. No more pictures – weather and light problems.

Final pictures of the day – Probably Warren Cottage – radio silence. I had walked too far – well beyond Vera  rendezvous and no access roads  .Eventually I reached Gapmouth Rock and turned back to Worswell Barton Farm and found my favourite back up driver – Nanny at the edge of civilisation. That’s it for the day. No crossing the River Yealm tonight. 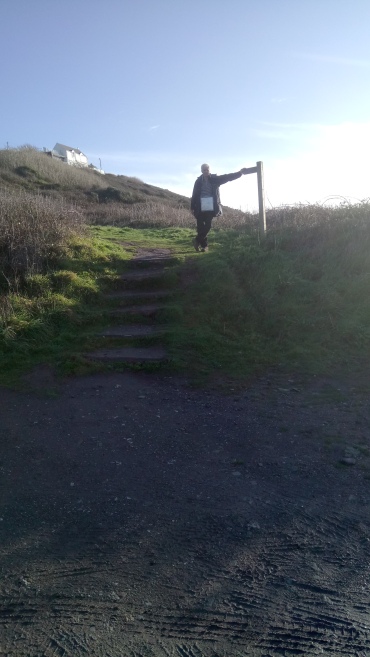 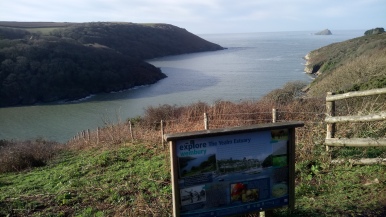 Next day – Day two of the trip  continuing the walk from River Yealm heading for Plymouth. Note Henry’s bench – albeit upside down. And Great Mew Stone all at sea.

The River Yealm still has to be crossed – perhaps at Easter when the ferry starts again….

Intrepid bathers brave the cold water – on the whole of my walk I haven’t gone swimming – although I have waded several Rivers in winter. 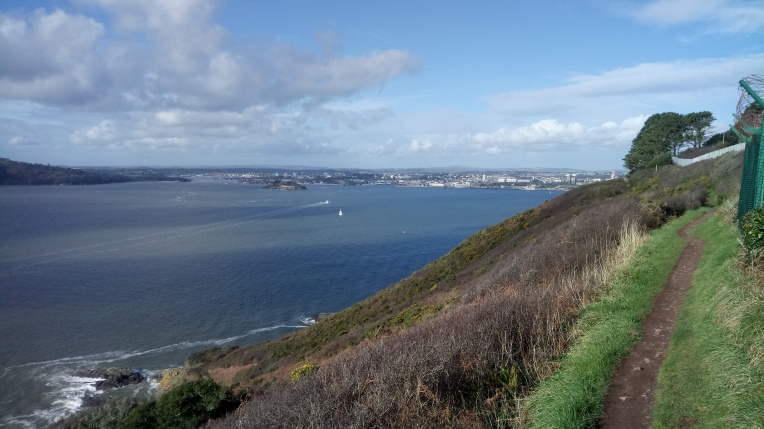 The ferry from Mount Batten to Plymouth Marina. 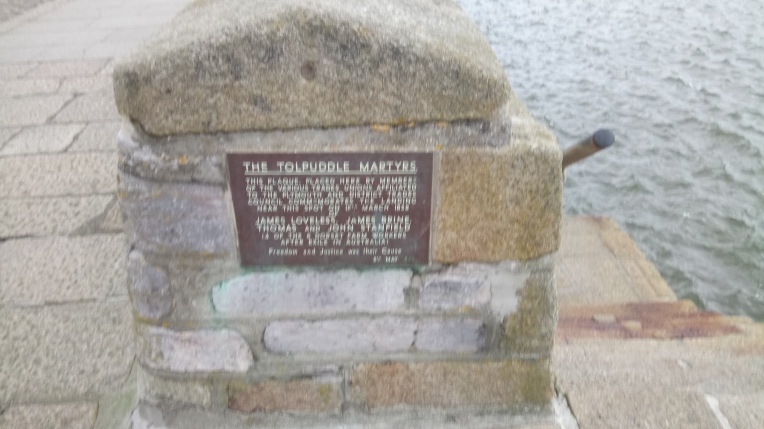 Plaque to Tollpuddle Martyrs – just as evidence I arrived at Plymouth too.

And now we leap frog ahead to Polperro, Polruan, Fowey and Looe, not necessarily in the right order, but as they came out of the camera. We were now under new management as Henry and Elizabeth  joined the walk as guests. I relinquished navigational responsibilities-

– herewith the journey in pictures….

Chez Henry; with  Nanny and Elizabeth – below- the view from our suite… 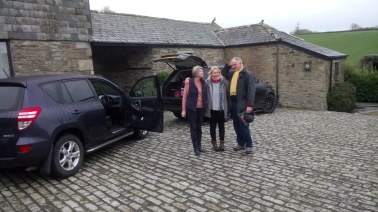 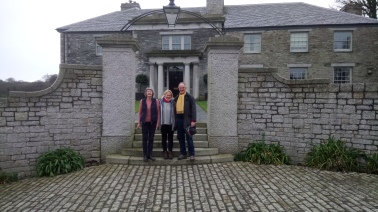 Polperro to Polruan walked by Bob, Henry and Elizabeth with Marilyn and Vera as Back-up 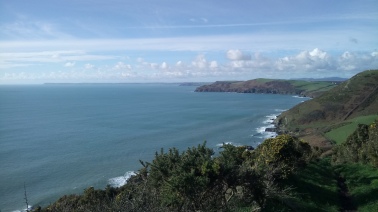 What can you say – the views are stunning, but the climbs were steep too! Heading for Polruan. 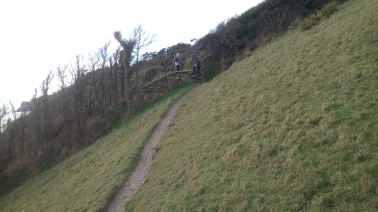 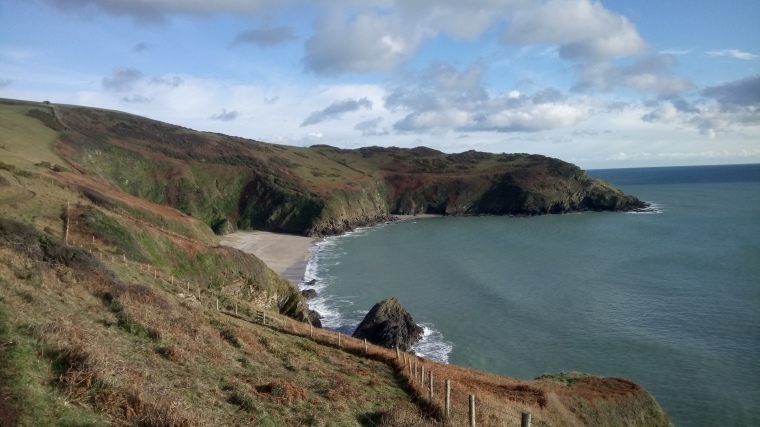 Six and a half miles from Polperro – arrival in Polruan, waiting for back-up and taking the ferry across the River to Fowey 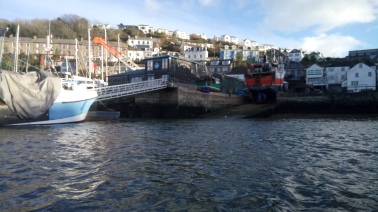 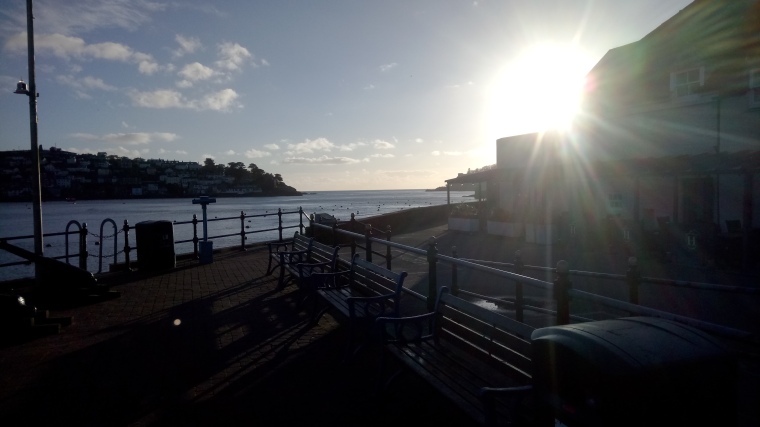 And so to Sunset.

And the next day, Henry and Bobl set off from  Fowey to Polkerris and to Charlestown.

Via Polridmouth and Gribben Head

Henry has seen the back-up crew – the cavalry has arrived with Cornish pasties and coffee, but first there’s a wind swept weir to navigate – no matter we were already soaked through. 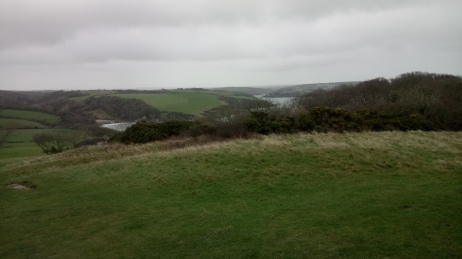 Gribben Tower on Gribben Head  towards Polkerris and ….. 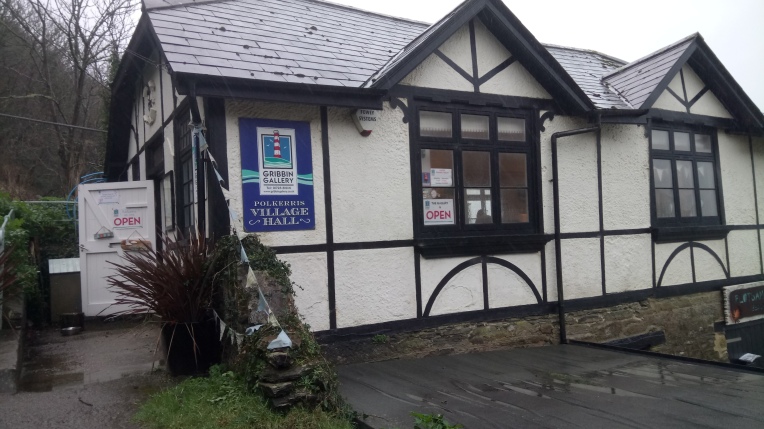 ….Polkerris Village Hall. Where our back up crew rescued Henry  and I carried on to  Charlestown and established a forward post in the Pier House Hotel awaiting relief.

So sorry P H H for leaving puddles around your lounge – pure rainwater I can assure you. In fact this would be the only evidence of my reaching Charlestown, apart from the empty pint glass of Fullers London Pride at reasonable price – I was so wet they thought I  was a local – but no photos  – the cameraman had the shakes and the camera was drowned. Rescue arrived just in time.

And so on the final day, Bobl and Nanny left Henry, very reluctantly, hoping to gain a few extra miles on the South West Coast Path before heading home to Shropshire.

….and bye bye Polperro – I’m heading for Looe through the muddy harbour and hoping to catch up on my fishing boat picture haul, some of which young Mark might fancy as watercolour material…. 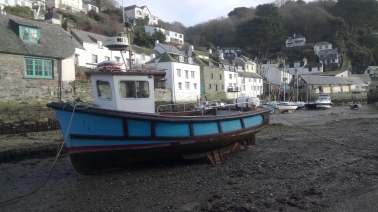 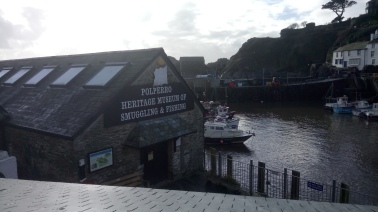 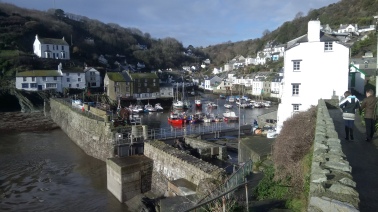 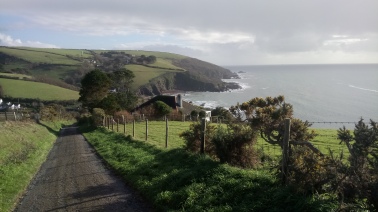 And finally bye bye fishing boat leaving Looe Harbour as I arrive to intercept Marilyn and Vera, in the Harbour carpark complete with Cornish Pasties and lashings of hot chocolate.