The Map below, courtesy of Natural England shows the intended route for the England Coast Path. Unfortunately, access to Orford Ness is restricted and the alternative route followed by Suffolk Coast Path goes inland via The Snape Maltings, my preferred option.

Similarly, the Proposed England Coast Path route  follows the Rivers Deben, Orwell and Stour inland, whereas the Suffolk Coast Path prefers the ferries that link up with The Essex Way from Felixstow to Harwich. I will discuss the position with English Nature!

No crimson worms – all colours represent Natural England’s proposals to open The England Coast Path by 2020. In hindsight they might care to reflect on whether the final route follows the coast around Orford Ness, or the less daunting Suffolk Coast Path via The Snape Maltings.

And rant – haven’t had one for a while.

If you have stumbled across this blog unintentionally, the previous 78 Episodes have described almost each pace of my journey around England’s Coastline, in the form of a letter to our Grandchildren. If you can’t handle the level of intellect required to communicate with two to twelve year olds then abort now, or just look at the pictures, otherwise you will be asleep in minutes.

This particular episode describes my journey on the Suffolk Coast Path from Sizewell, through Thorpeness, to Aldeburgh; inland along the Sailors  Path to The Snape Maltings; returning to the coast via Chillesford, Orford and Boyton; eventually finishing near Shingle Street where the River Ore breaks out into Hollesley Bay.

Because of the remoteness and lack of public transport, much of he walking was duplicated by circuitous routes, but all the time attempting to keep to the proposed English Coast Path. I will be seriously interested on which route they eventually decide  around Orford Ness. Suffice to say my route started at Sizewell and ended at Coastguard Cottages, near Shingle Street.

Walking the coastline is the easy bit. Just one foot in front of the 0ther. Admittedly going off level gets harder. Personally, I need the grandkids  input to handle the myriad  difficulties I experience just trying to write the record. I am convinced that Gremlins are employed specifically to confuse me, the moment I appear to comprehend the workings of the blog. It’s never the same twice. It’s not improvement or fine tuning – it’s harassment.

And who begat Windows ten? Who  is responsible for the moving target that is my screen?  I can’t begin to describe the contortions needed to pin it down while I attempt to  inflict some writing. There was little wrong with Windows Seven and the font did not reduce/grow/disappear/correct/admonish and generally slither around while I didn’t even go near the keyboard. All very disconcerting and spooky. My fault for dropping the laptop and rearranging the hard drive. Unfortunately the new hard drive censored most of my address book, which is probably a great relief to those not now receiving my missives.

I’m amazed I got away with writing all the above unmolested, although I think I’ve developed a nervous tick. But I am hugely impressed with the pictures. The technology that produces such quality never fails to amaze me, but the Grandkids will take it all in their stride, whilst I resort to quill and inkpot to scribe,  and surrogate Grandchild Mark, watercolours to illustrate. His work is incredible and you would agree, if only  I could find out how the hell I can transfer some of his watercolours to my screen without getting paint over everything. Why not look at his website .  https://markbuck.myportfolio.com

Now for the real blog – rant over….

We negotiated  two birthdays in seven days, Stan and Jakie,  six and five, and presents of Crawler Caterpillar Tractor and Tennis Racket  respectively. Both long standing requests and well earned. Look at the pictures carefully and you’ll see I captured a real life tractor just like your scale model, Stan. And as for Jake’s tennis prowess, the moment he starts emulating Andy Murray, I’ll whisk him off to David Lloyd. We need no introduction , do we Henry? Those were the days…..

Looking at the spread sheet we can have a breather before the next celebration, Rowan is four in April. Although not forgetting Nanny  next week! She will be twenty one again.

Well done Rosie and Lauren – you both have extra special mention in despatches and Maisie was very grown up in her big girls outfit for Jake’s party. Boys were outnumbered nine to five. I foresee interesting times in parties yet to come!

Valley Farm Camp Site – lonely – apart from the horses – and the camel! I was surprised – the fence was alarmed

The remains of the day  of my arrival I managed a circular walk of about 9 miles  between Sizewell, Thorpeness and Aldeburgh. Mostly along the beach but on the return journey I ventured inland for variation. 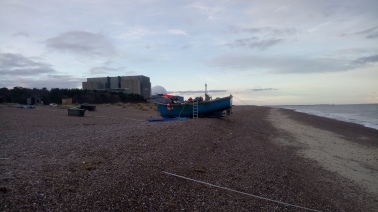 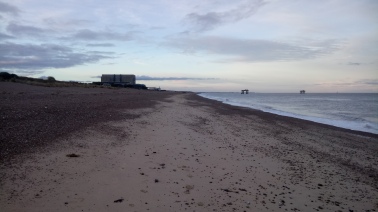 The Suffolk Coast Path is a bit of a misnomer; I  rejoined it at Sizewell in full view of the Nuclear Power Station and kept to the beach through Thorpeness and beyond to Aldeburgh, but after that it turns inland……

The shallow cliffs from Sizewell to Aldeburgh are quite feeble and prone to erosion, but some householders always look on the bright side despite the encroaching sea…. 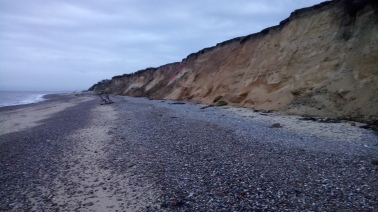 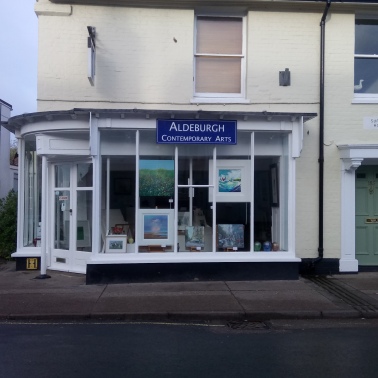 The Sailors’ Path offered Snape Residents easy access to Aldeburgh, a thriving centre for fishing, boat-building  and smuggling – not now – of course…. 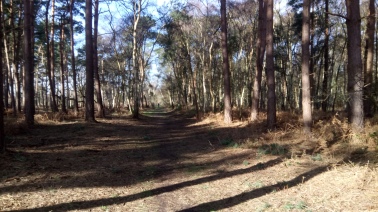 But after that the Suffolk Coast Path, here, renamed The Sailor’s Path, headed inland towards The Snape to skirt the complications caused by the River Alde and the River Ore meeting each other and the forbidden Orford Ness. All sorts of wartime experiments and cold war activities, have gone on at Orford Ness but it is now the responsibility of the National Trust and is partly a National Nature Reserve. The Ordnance Survey Map indicates a radio station with many masts. All of which makes it hard to visit, particularly since the Ferry doesn’t operate until Easter. Even then access is very limited.

I took time to visit Orford but since it is not on the designated Coast path I didn’t waste too much energy  other than contemplating the setting sun. The hidden depths of the place are referred to in Patrick Barkham’s book Coastlines; nothing was written that made me want to visit! Eerie!

Just for the record – two views of Orford, just in case they re-route the English coast path via Orford Ness, but I didn’t like the feel of the place..

I paid my respects to the Snape Maltings, where earlier on I had left ashes belonging to Yvonne Pedretti, who  had worked and  exhibited  there. She had charged me with the responsibility of  depositing her ashes at several places, some in Southend,  others further afield, but I’m happy to say I was able to   reasonably comply with her wishes, each  time reciting G K Chesterton’s  “Rolling English Road”. The verses of which seemed highly appropriate to my English Coast Walk, which is why I  adopted it as my anthem.

Snape Maltings and Bridge over the River Alde  – artistic community – and bus stop for the return to Aldeburgh.

The Path then heads back towards the Coast via Tunstall Forest, Chillesford, Butley Abbey and meets the River Ore at Boyton Marshes. This runs parallel with the coast but does not enter the sea until a few miles later where it merges at North Weir Point,  Hollesley Bay

The one aspect that was quite a relief after the undulations of the South West Coast Path was the relatively  level walking and good paths, if you ignore the general mud surrounding the pigs  . I didn’t even unwrap my sticks. But the only inconvenience of this particular three day  walk was lack of public transport. Only the 65 Bus from Aldeburgh to Snape provided any relief from circuitous walking. All other routes I tried to vary the circular route so that I retraced my steps as little as possible.

Random Pictures – out of sequence but too good to be ignored…….. 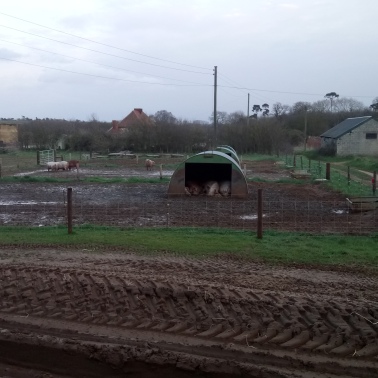 This is Pig Country – all that separated me from massive sows and numerous piglets was a single strand electric fence just off the ground – if the grumpy sow thought I was after her brood no fence would have stopped her. You’d be grumpy with all those piglets; they didn’t bother with the fence and just ran amok. 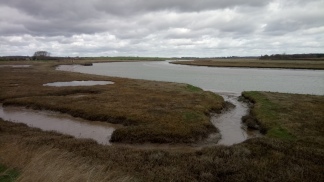 One of the locals at Capel St Andrew.. 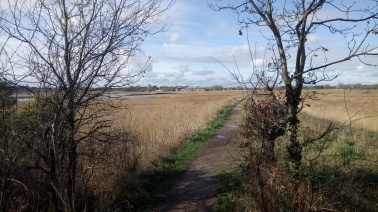 Pig Food above and  Butley Mill holiday venue below… 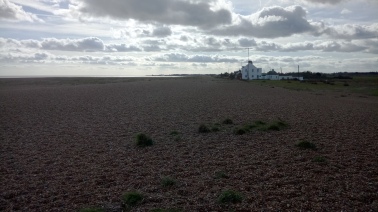 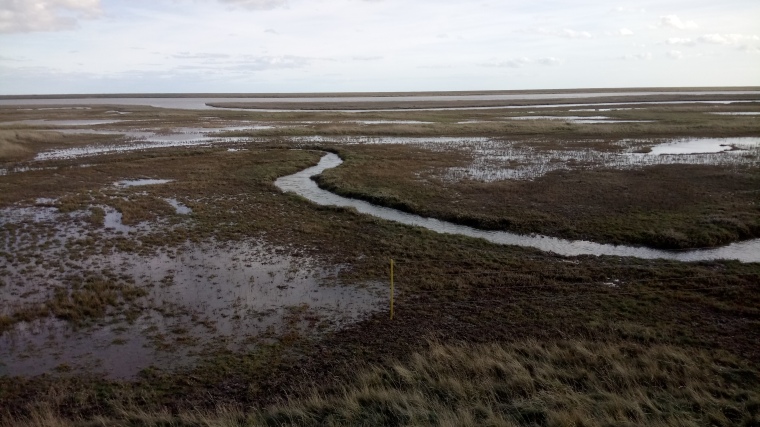 And finally the approach to Coastguard Cottages and Shingle Beach, where this walk ended.