Slight cause for concern…….. you may not be too surprised to learn that, for the second time I have filled up a whole blogsworth of cyber space. Therefore, at vast expense, I have upgraded to  WordPress ‘Personal’ status, which allegedly allows me to continue blogging with my own domain name amongst other things. I don’t profess to fully comprehend what I have now unleashed, but the immediate effect was like writer’s block release, and there should be more than enough capacity to complete my record of  the walk round England, and maybe Wales too? The concern is that I’m not too sure what the blog is called any more…. but rest assured that when I find out you’ll be one of the first to know……previously I was ‘still0england.wordpress.com’                                                           Now I think I’m ‘still0england.com’  but I’m still waiting for confirmation!

Well done Rosie and Lauren for your dancing performances; Encore! Nanny says you were both the stars of the show as always, a very great effort.

And Jake and Maisie for getting through the final stages of Chicken Pox – always a scratchy time. They can’t wait to get back to tennis and ballet..

This most recent walk was intended to finish off the East Coast but instead  was a forgettable, complicated and altogether confusing trip that probably protracted my adventure rather than bring the finishing line closer. ‘ Forgettable’ in the way that I am having difficulty in retrospect,  piecing together the evidence of how, when and where I walked  and twice I forgot where the car was..We won’t go into the whyfores….  ‘Complicated’ in the logistics required to accomplish all the salient landmarks along the route. Felixstow is a mile or so  across the Stour and  Orwell  Harbour  from Harwich but forty miles by road and the passenger ferry is out of season. ‘Confusing’, because .. well I am easily rattled, particularly after the second time I couldn’t find Vera. I won’t say I lost it but it did take a while to rendezvous.  Fortunately the car turned up – once by Clacton Pier and again at Walton Pier. Exactly where I’d left my motorhome from home.

Serendipity returned and conjured up buses when I needed them most. Even when I got on the wrong route the bus crew kindly stopped and put me on the right route, which happened to be the bus behind. Yes …. I do use the seats reserved for elderly passengers. And the sticks, rucksack and walking gear mean the drivers wait for me to be seated. No! I am not getting past it!

The intention this visit was to complete The Walk on the East Coast by joining Clacton in Essex to Shingle Street in Suffolk, but I underestimated the logistics required to overcome the Rivers Deben, Orwell and Stour, and  inaccessible peninsulars of Felixstow, Harwich and Walton on the Naze, and so I have to return to complete a couple of ferry trips and join Harwich to Walton via Great and Little Oakley and Thorpe and Kirby le Soken, as I circumnavigate Pennyhole Bay.

In map form, courtesy of Ordnance Survey, and apologies for the heavy snowfall over Jake and Maisie in the Peak District; –

There is about a twelve mile gap before the  Crimson Worms  join up on the East Coast, North Essex.  Which means only 274 miles of  the Cornish peninsular and about 75 miles between  Tynemouth to Berwick to complete by November. Nearly there?  Hopefully under 400 miles but you can never tell with the circuitous routes taken in the more remote and isolated parts.

I returned  to the Valley Farm Horse Riding and Driving Campsite near Wickham Market in Suffolk, and after an unsteady night, was able to see the early morning horse mustering while I ate my breakfast. I had been unable to sleep on this clear moonlit  night because, from  within the frail protection of my tent, I could hear the horses chomping away, without being altogether sure if they were horses, or loose cows or even a bull!  I knew the camel , alpacas and other farmyard animals were  elsewhere. Several times in the night I got up to check who was where and that my sticks were handy.

There was one naughty pony on the breakfast round up, who delighted in taking some of his mates way off in the paddocks, where the grooms  had to walk far out of their way to gather them in. Eventually they responded to the sound of food bowls being bashed. And I made my escape to resume the walk  from Shingle Street to Bawdsey. Perhaps ‘next time’ I might do the trip on horseback………………………..

Entrance to the riding school and campsite…. 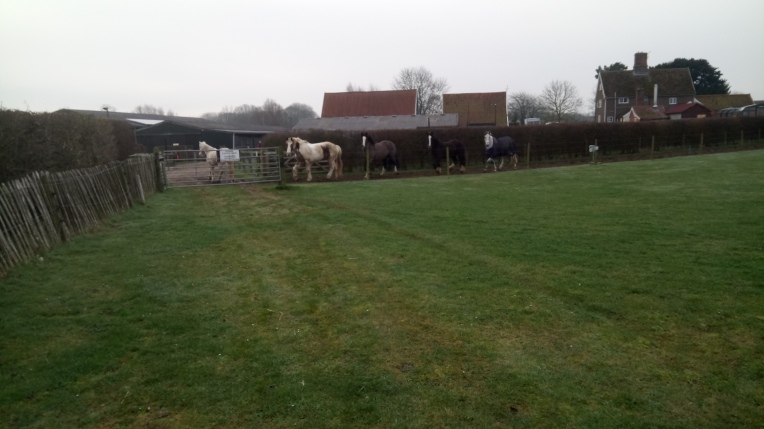 These horses wanted  their breakfast more than the naughty pony who led a mutiny to the furthest paddock! 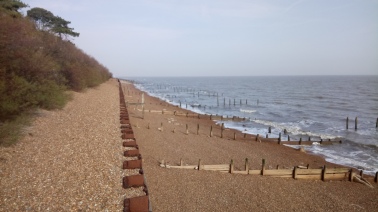 Sea defences get dilapidated over the years but still just manage to keep the sea out. 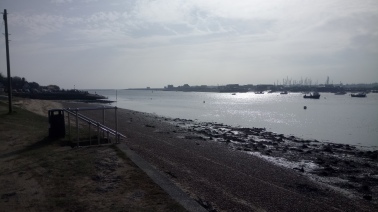 The tide going out at the River Deben. Time to return to the tent and horses, where I found a package of Horse Brochures from the Campsite owners addressed to Rosie, Lauren, Stan, Jake, Rowan and Maisie. Thank you!

Sunrise, the next morning, at Felixstow.

…..and below, the business end of Felixstow,  the deep water harbour with millions of containers being exchanged.

and at the other end of the scale – Old Felixstow – Deben Ferry but not till Summer. 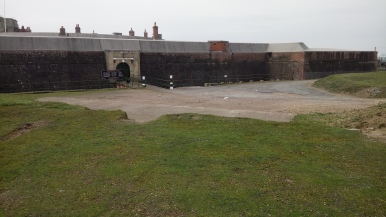 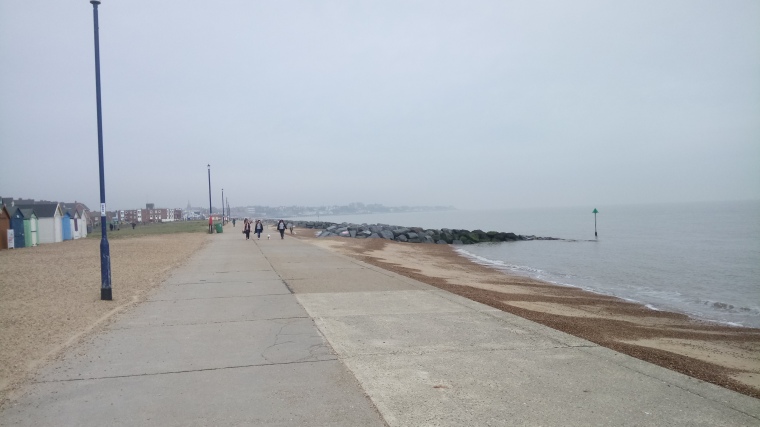 Felixstowe Pier and promenade – not open for business yet

And now North Essex, extending The Walk from Clacton to Walton on The Naze   but there’s a big photographic gap. Not only do I lose Vera but I left the phone/camera/lifeline with her as well – so no pictures until we’re reunited  – hence the montage of Walton Pier and views below. Sorry Frinton but you got missed out, although I did walk your pleasant beach and I suspect you are somewhere in the distance in the shots taken from the pier head. 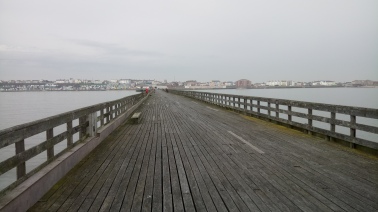 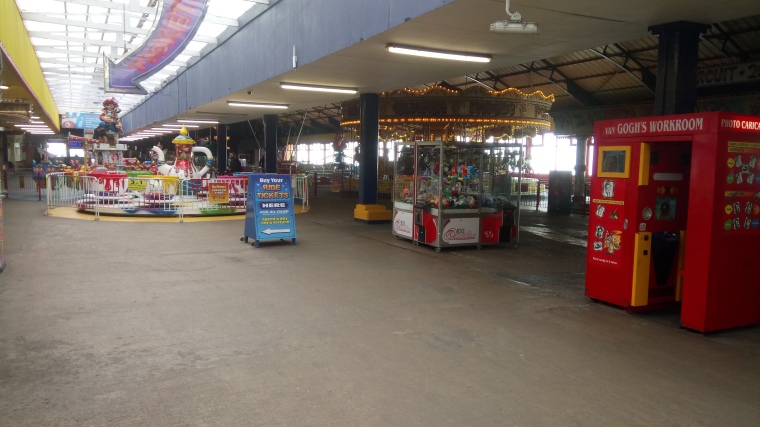 Below, Walton Lifeboats and Stations, old and new, on the pier and on the shore…. 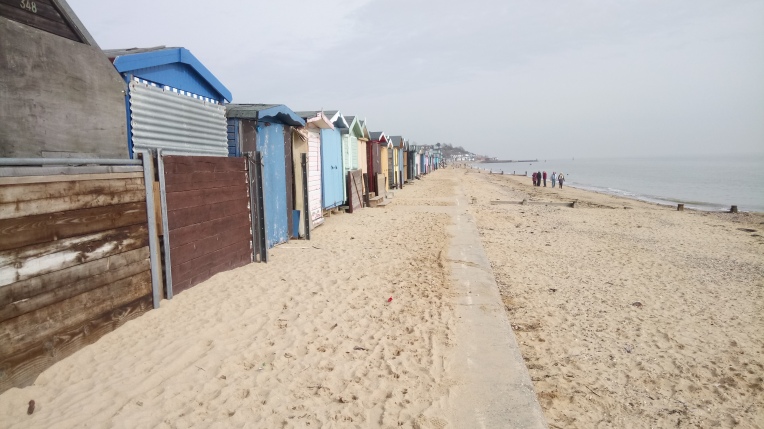 Finally, not completing the allotted schedule; still a twelve mile gap between here below at Walton on the Naze and Harwich, a passenger ferry ride away from Felixstowe, across where the Rivers Stour and Orwell meet.

That’s it – a bit disjointed but so was I! My starting point next time out will be Walton Pier heading for Kirby/Thorpe le Sokens and the  Oakleys and finally Harwich to join up the Crimson Worm by taking the ferry to Felixstow.

Update- last Episode I indicated that I would consult English Nature about the correct route of the England Coast Path around Orford Ness. I did have a very informative discussion with Charlotte, who was overseeing the path as far as Aldeburgh. Unfortunately, the personnel for  next Stretch- Orford heading South have  not been decided yet and so no plans have yet been undertaken. Charlotte took note of all my comments and asked for contact details should anyone wish to further discuss. It was interesting to learn that the criteria, and particularly the legislation, adopted to put the County Coast Paths in place  differs significantly from that for the proposed  England Coast Path.