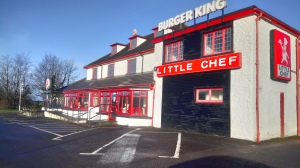 Okehampton  Camp site for one night only, Travelodge at rear – because I was accompanied by back up crew of Nanny  driving Vera,  my normal sub-standards were not acceptable; so no sleeping under canvas; no eating out of chilly bins or Thermos flasks, nor camp fires. Instead we patronised  the delights above and adjourn to an attached heated hotel, with real beds, pillows, duvets, Wi-Fi, tv, showers, bath and electricity. I think the only mod-con I’d swap would be the bath! The rest will turn me into a softee. But it’s worth it to have Nanny  alongside…. with Vera! Even though you’d refuse me admittance if you’d have seen the state of me after a day’s session on the washed out S W Coast Path  – but I did remove my boots. Phew!

The Walk has decidedly gone beyond the point of no return, but is it about to reach the point of no completion? I have inadvertently managed to leave the most strenuous and inaccessible parts  until the end. With the self imposed November deadline getting nearer the finishing line seems to be getting further away. I thought my energy levels of last year would return after hibernation, but I’m struggling, and this accompanied trip was intended to remove any anxieties about running out of time. But instead running out of energy is a worry. My advice to you is start your walk round England with the South West Coast Path, and if possible, the downhill bits only.

The point I’ve reached on the northern section of the  South West Coast Path approaching Bude has to be the most scenic and the most undulating, and following a night’s incessant rain, the most flooded and muddiest and relatively remote. I needed the back up crew  alongside because I was well out of reach of public transport and emergency services and circuitous walking doubles the time taken to make forward progress on the overall walk. All my miles counted this trip, even though my targets were severely curtailed by muddy climbs, descents and a  wind that blew Nanny back to the car, abandoning any walking  company but no ‘lost’ miles. Although I lost count of the number of times I ascended and descended between sea level and one hundred and fifty metres. I found each climb enery sapping and debilitating.  I tried beach walking, but only once. I traversed a flooded brook at the inappropriately named  Welcombe Mouth  by wading across hoping that there was a way out at the other end of the beach. Progress over the wet, slippery boulders and newly fallen cliff faces was even slower than keeping to the undulating Coast Path.

I could only take two days of this relentless slog. The views were fabulous and the worst of the weather occurred whilst I was not walking – except the wind. On the first day it was right behind me, but by day two it had turned into my face and I called it a day at Foxhole Point, a beautiful vista looking back at most of the eighteen miles I had just walked. Far from being downhearted at the reduced mileage, I was elated by looking back at where I’ been walking and comforted by knowing I’d overcome some of the trickier climbs on the whole S W Coast Path.  And I didn’t have to drive home. So I slept! And finishing doubts evaporated. 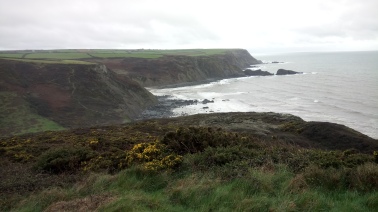 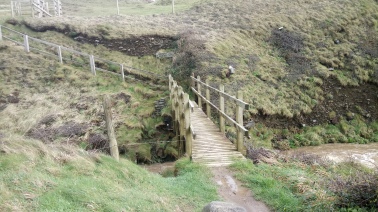 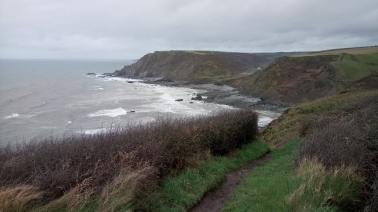 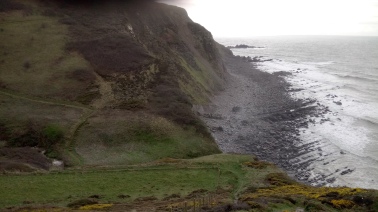 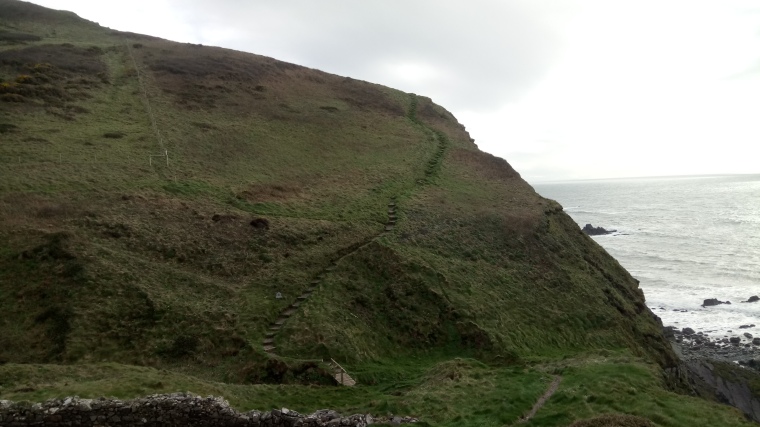 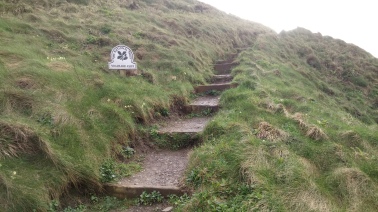 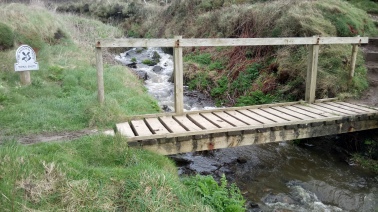 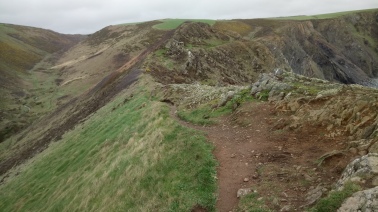 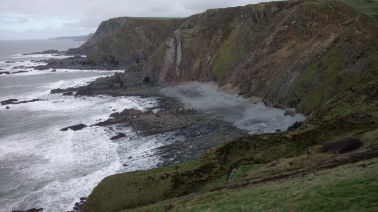 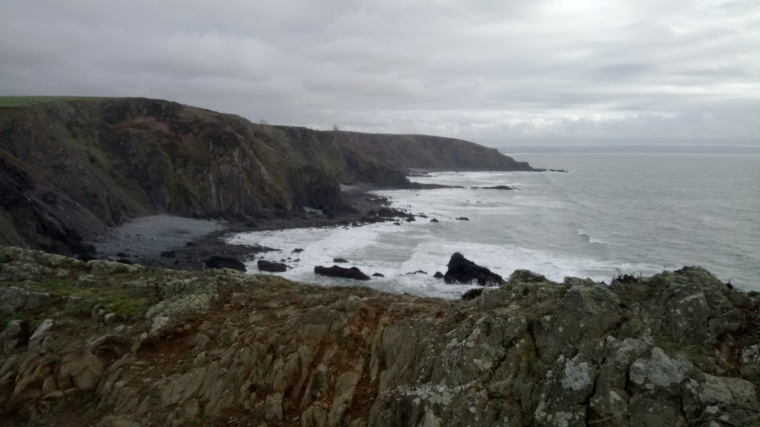 More National Trust Territory at Vicarage Cliff and Tidna Chute  and progress toward Steeple Point whilst trying not to capture the very prominent Radio Station in my lens.

The tail of Brer Robert –

It’s very hard to ignore the Radio Station perched upon Harscott Cliff at Spot level 129 metres. There are many huge satellite dishes laid out behind security fences and for reasons of National Security, I did not want any evidence on my camera. It would be difficult in any remote area to persuade  determined  spycatchers that I am walking England’s perimeter for fun and not for clandestine nefarious purposes.

As I nonchalantly strolled by, I missed a very sharp Right hand turn towards Reed Rocks and gradually immersed myself in brambles and overgrowth, and determined not to miss a short cut decided it was prudent to force my way through. After a while the thorns had actually extracted my bootlaces and I was in danger of losing my boots. I backtracked and after an hour stuck in this briar patch with the sun descending and late for my Duckpool Cottage back-up  rendezvous, managed to return to where I had started..

It amazes me that for the period of incarceration no bells, whistles, alarms, bullets or rockets came my way. Not even a “What the hell do you think you’re doing?”.

Maybe a couple of squaddies were ‘aving a larf following my every false move on CCTV. Half expected to go viral on you tube! 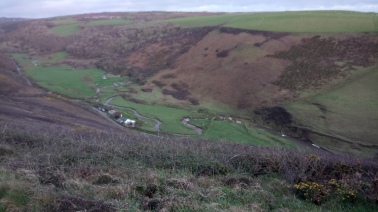 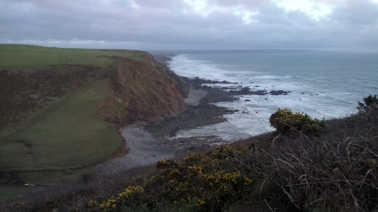 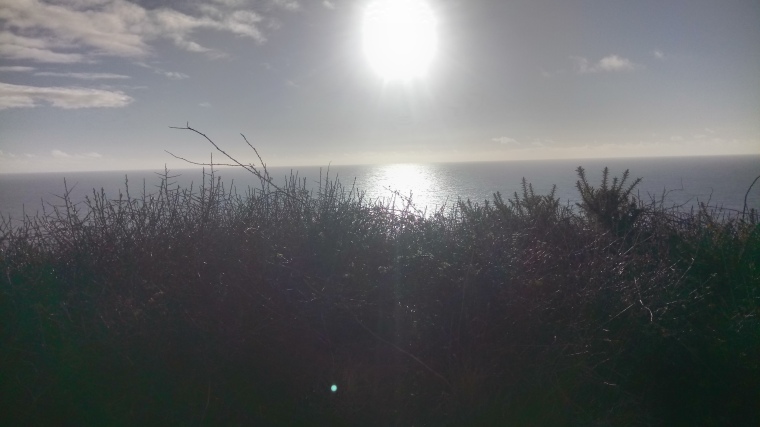 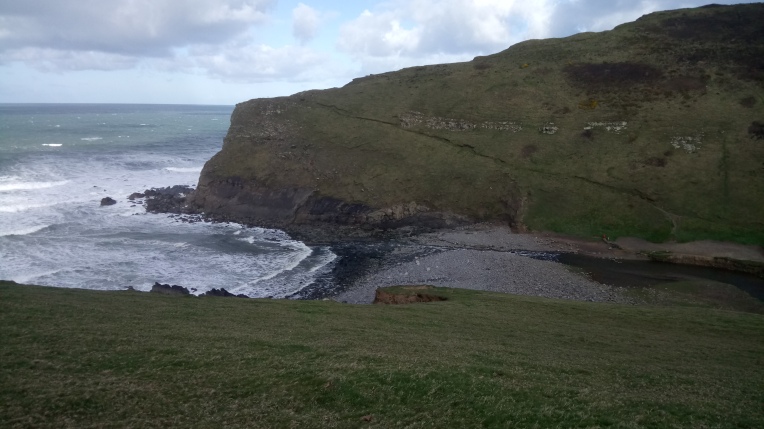 The next day,  on my way again but looking back at Steeple Point and The Duck Pool, with the SW Coast Path quite clearly descending rapidly to sea level from 129 metres at the Radio Station….. 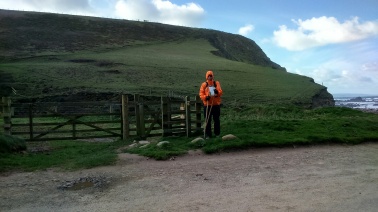 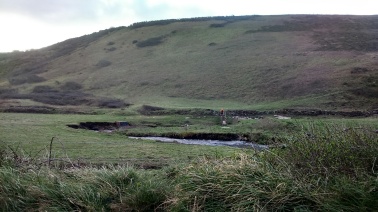 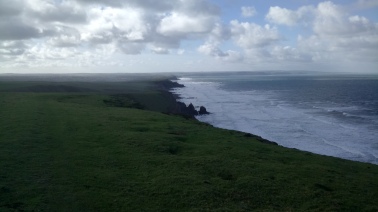 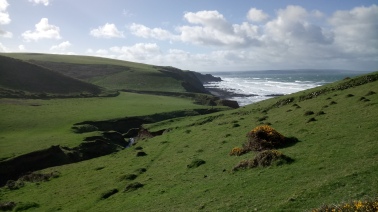 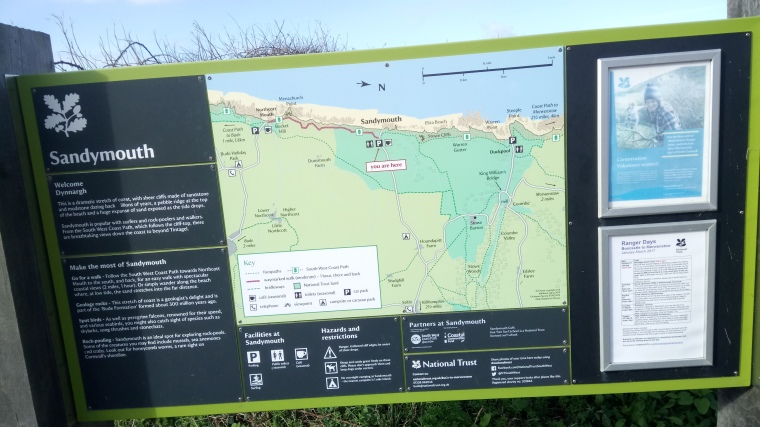 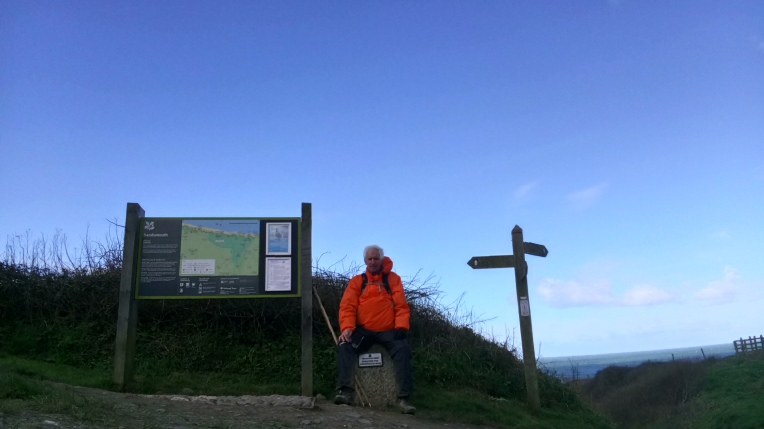 The National Trust were asking for donations;  being a paid up member I found no problem leaving an extra deposit… an ingenious selfie arrangement that took ages – but I needed a rest! 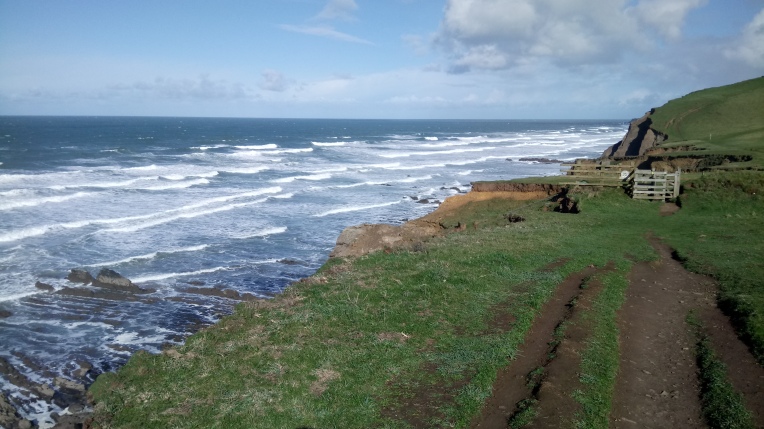 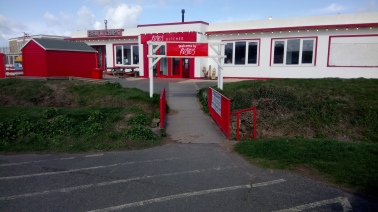 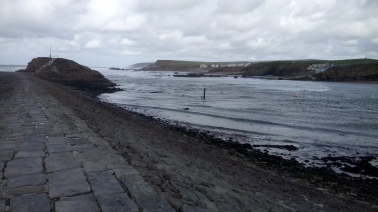 Outgoing tide at Bude where the canal and River Neet or Strat join the sea;  and Rosie’s Café at Crooklets Beach 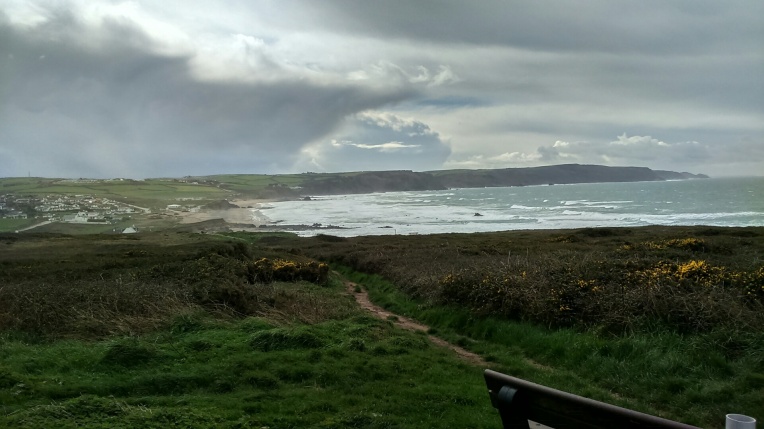 Widemouth Bay from Lower Longbeak – shortly after Nanny joined the walk – until the wind blew  her back to Vera. 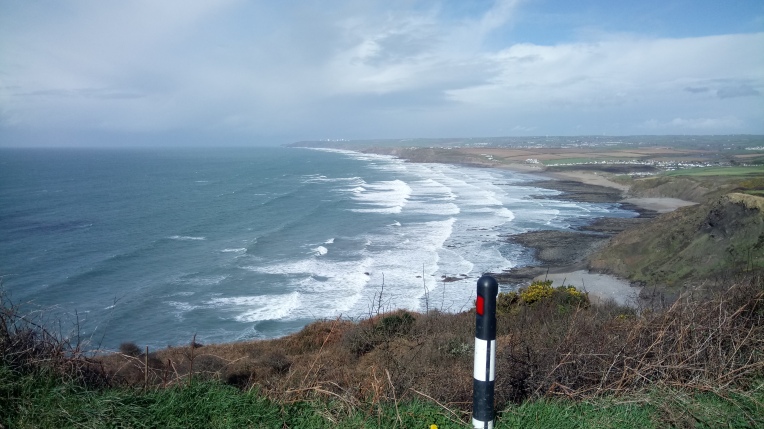 Widemouth Bay from Foxhole Point lookout.  A final view before the final rendezvous and drive back home and sleep…zzzzzz!  Shhhhh!