We’ve all recovered from Christmas and New Year Celebrations and it was time to brave the wintery conditions and record low temperatures to resume the walk around England and Wales.

I am not brave enough to consolidate the title and revert to calling it a Walk round  Britain, because I have studied the maps and by including Scotland I almost double the whole walk.  Even if I maintain current policy and stick to the mainland coast paths, plus a few selected islands.

I’m not ready for that.

But at some stage during my completion of The Wales Coast Path I know a  choice is going to confront me. I’m inclined to consider Scottish Independence is the best solution for me.

The generally accepted distance completely round Wales, is about 1,100 miles.

I have already completed 182 miles of Offa’s Dyke Path whilst completing The Walk Round England; and afterwards I walked 68 miles to Bangor on the Northern Wales Coast Path; plus recently 72 miles from Chepstow,  to west of Barry Island on the Southern Wales Coast Path.  So I reckon I have under 800 miles to complete my walk around Wales.

The Crimson Worms explain all, on the map  below;

– the big thumb tack near Mid Wales is The Mill in Shropshire, conveniently placed on Offa’s Dyke Path running north/south;

– the other tacks on the English coast represent the furthest North, South, East and West I got whilst walking The England Coast Path.

The race is on to see which route gets to Aberystwyth first, and then I decide whether to take on Scotland. My proposed schedule has probably deferred that decision for about a year. I won’t make any rash promises until I’ve computed  exactly what it entails! And I’m going to need quite a lot of help……  many followers have already announced their intentions  to join in the Wales Coast Path Walk – all are welcome!  Each first weekend of every month, there will a two or three day outing – you just have to find out where to join me on the North or south Wales Coast Path. Other unscheduled visits reducing the distance  to Aberystwyth will occur and will more than likely be camping expeditions……..  again –   all are welcome!

The Seawall gives the mainland   protection from Severn Mouth and or is it The Bristol Channel?

The Path could not keep to the seawall and soon turned inland to regenerating areas that were formerly industrial – sadly attempts to maintain a suitable coast path tourist environment were heavily blighted by fly tipping and made the path look like a detour through  the local tip.

Shortly after the unforgettable and unforgivable fly tipping, The Path then took me past this – whatever it is? I know I was slightly off the correct route but it was better than picking my way through dumped rubbish. The formal route of The Wales Coast Path now gets very complicated shooting off into the re-generating Cardiff docklands and city centre.

I subsequently found out it was part of a Refuse Centre And Re-Cycling Plant.

Moving on and further inland following an uncharted brand new highway, it wasn’t long before I skirted the old docklands and  surrounded the Welsh National Assembly below – no fly tipping here! All of a sudden I was in the heart of Cardiff and wandered off-piste looking at local highlights…

……..I finished the first day’s walking crossing Cardiff Bay Barrage and ready again the next morning to head off towards Penarth 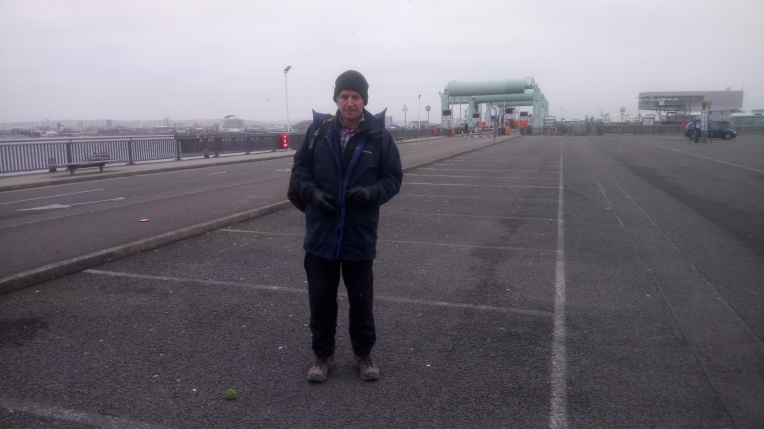 Penarth Pier – fly tipping a distant memory  – and, from now on,  The Wales Coast Path really does hug the coastline – mostly…..

Penarth RNLI Station – not open for business – we’ve damaged two in our collection of RNLI Mugs and need replacements for Mablethorpe and Bembridge…. we’re sunk without them – anyone going to either resort, please replenish our stocks!

Vera and Marilyn  overlooking Sulley Island.. in wait for plying me with coffee or Bovril..

Barry Docks Entrance, but not for me to visit the Lifeboat – I was barred.

And so I continued my scenic tour of  Barry Island – this is  Whitmore Bay, see the bright lights? Some  fun parlours are still open even in the murky depths of winter. Compare and contrast with Southend Pier! We’ve got Jamie Oliver…..?

Instructions for fun at Barry Island….. 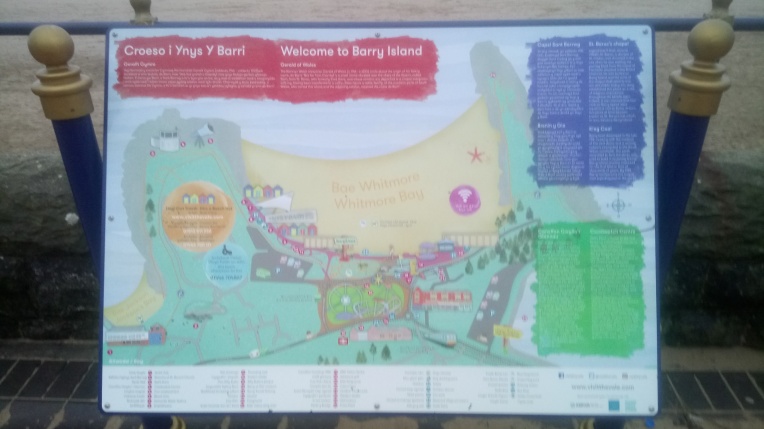 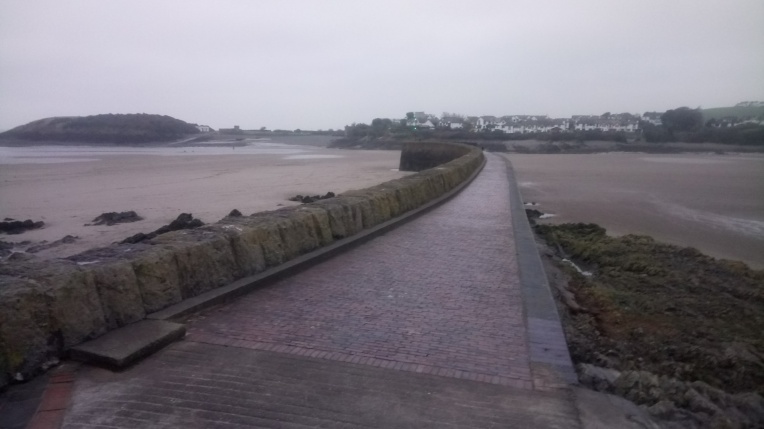 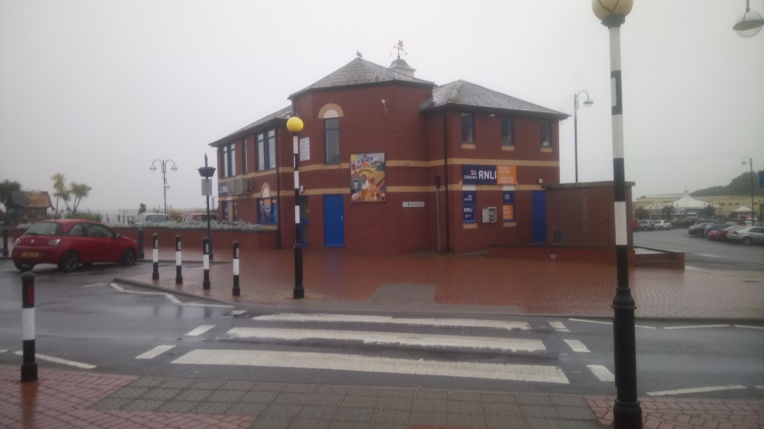 What’s the quickest way out of here? The Wales Coast Path of course. Well signposted from now on and plenty of evidence of the industrial heritage as I leave the city heading West.

Porthkerry Viaduct served the quarry and now the power station. Apparently 5/6,000 tonnes of coal a day reach the Power Station by Rail. (Wikipedia) How come I didn’t see one freight train?

Rhoose  former quarry now regenerating – at times the path had sheer drops either side – to the sea or to inland lagoons formed by centuries of  excavations. 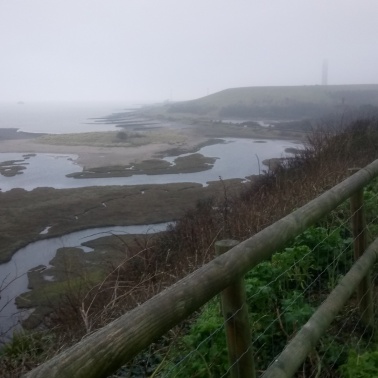 But I found an escape route, leading to the environs of a coal fired power station

The Wales Coast Path threads its way around coal fired West Aberthaw Power Station, while The River Thaw tries to slip out un-noticed, but a bit the worse for wear.. apparently the power station is doing trials on carbon capture and also I noticed stockpiles of timber in addition to the vast tracts of coal brought in by railway. Sorry – I mean bio-mass – all this jargon doesn’t disguise the unhealthy nature of the processes. Wikipedia claims 5-6,000 tonnes of coal a day is brought in by rail.

I, too, back at The Mill, am at the cutting edge of energy production, with my 0.66 kilowatthour micro- hydro- generating plant due to be installed where the millwheel was; to supplement the maximum 4 kilowatthour PV Panel installation …… all we need is plenty of sun and plenty of rainwater! Latter guaranteed!

That’s the River Thaw emerging from The environs of the power station; fortunately the limekiln installations have long since fallen into dis-use. Things can only get better – nature doesn’t take long to hide our previous nasty industrial activities; but fly tipping doesn’t help…….  yes it made an impact on me. I shall find someone to rant to!

The finish this time out was at the WEST ABERTHAW POWER STATION, best hidden in the mist. Back again in about four weeks – hopefully we’ll get some real scenery next time? And the mist won’t be missed……sorry!

One thought on “Episode 99 – 3,475 miles and 281 days walking round England and Wales. This trip – 38 miles on the Wales Coast Path from St Brides Wentlooge to West Aberthaw Power Station via Barry Island.”