Where I left off last time out on the Wales Coast Path  – Delightful  West Aberthaw Power Station – starting Point for Episode 100…….

…..and 27 miles later, appropriately,  Rest Bay (below), west of Porthcawl, where this trip  finished after tripping  over the 3,500th milestone – 3,502 actually – and counting – round England and Wales. It was wonderful and exhilarating to have been back on the road again. For a while I’d been contemplating life without the Coast Paths. But that’s all behind me now.

Two mileposts encountered this last trip on my walk round England and Wales, firstly Episode 100 of the blog and secondly, I’ve walked over 3,500 miles. Most of it in the right direction. In another 500 miles or so, I’ll trip the 4,000 mile barrier, and the finishing line at Aberystwyth should be in sight.

Which crimson worm will get there first ? At the moment South appears slightly less sluggish than North, which seems becalmed around the Menai Strait. Progress Map below…..

I did try to add some miles to the Northern Welsh Scarlet Worm a short while ago. I set off, in good weather for Llanberis YHA to attack Anglesey. Vera’s heater declined to come with me; around Llandudno the 4×4 Warning light came on  followed by the Engine management light. The sunshine was substituted by snow, which got heavier and started to settle on the road. Although almost there, I bottled it and quickly added several layers of walking clothes and drove home non-stop!

The Southern Scarlet worm is also showing little progress from last month, but after upgrading something technical to a superior version since the last blog, I have lost the facility to edit the map any more. Progress!? So just imagine the scarlet line a few miles short of Port Talbot.

Everything is falling apart – but I still keep walking…….

The Coast Path clung close to the shoreline on this stretch which was generally scenic and pleasant as I got removed from the industrial regeneration of the previous stretch.

What I was not prepared for was the similarity with the S W Coast Path with the very frequent changes in altitude, which showed me how unfit I was after a prolonged layoff. Better get used to it – there’s far  more to come.

………Setting off from Gileston  and approaching Col Huw Point

England on the left horizon from the Wales Coast Path

Col Huw  Point – lunch break where I refuelled with Bovril, which has replaced Guinness as preferred drink of choice. There also was a choice of dismounting the ridge; the formal steps dead centre or the cliff edge. I must have missed the steps? But I got my Bovril. 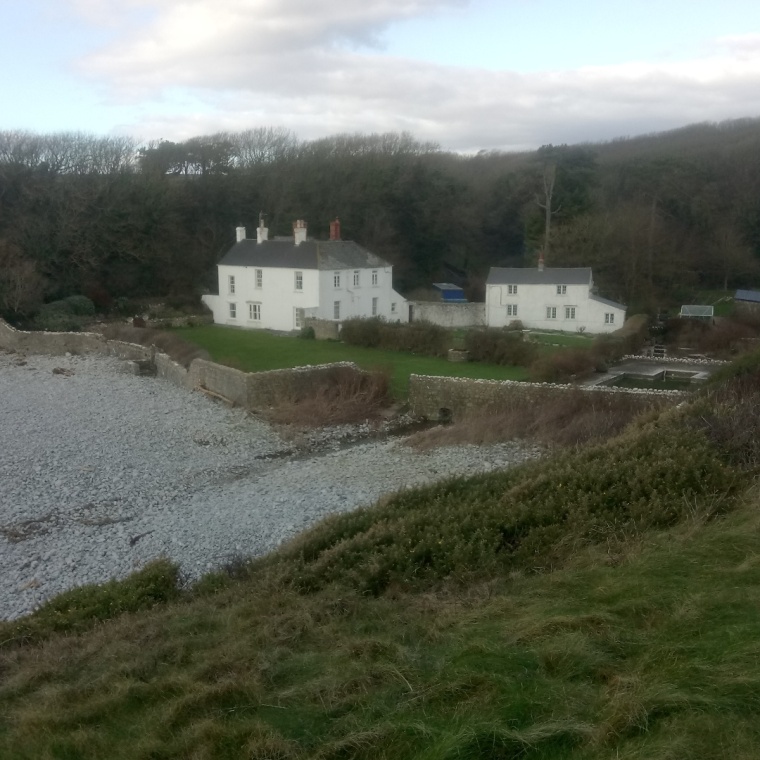 Tresilian, bottom circle above, has views of Exmoor (top  circle) across the Bristol Channel . 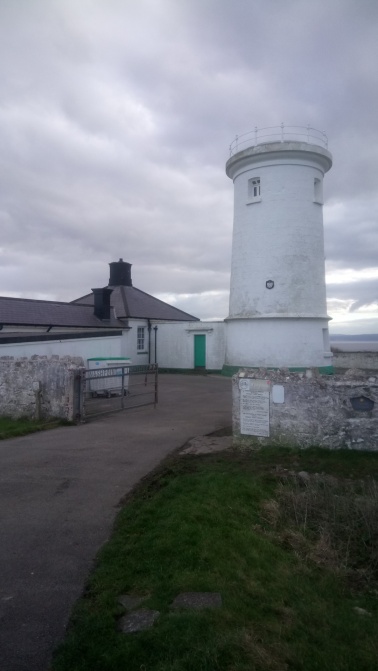 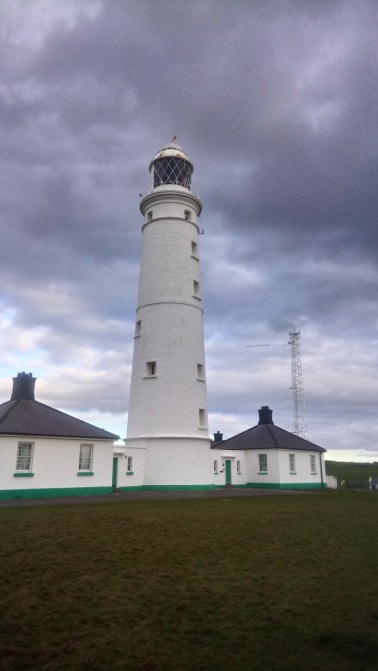 Nash Point Light House, here and there….. near Marcross.

Heading for New Mill Farm Carpark to rendezvous with Nanny and Vicky – who had noticed Vera was absent?

At some stage Ffynnan Fair  …….

…..turned into Nash Brook. At the end of which Nanny and Vicky were waiting……. at the end of day one.

Day two started from here, but I’d have started somewhere else if I knew the wild horses were going to start on me. Luckily I hadn’t taken a short cut across their field to The Coast Path, they were superexcited…

After retiring racehorses, there seems to be a monument to retiring rock bands with Dunraven Park, Dancing Stones and Slade Park grouped around Pillow Mound and Pant y Slade, ancient earthworks and fort. 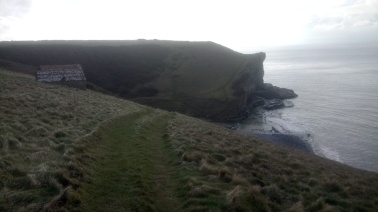 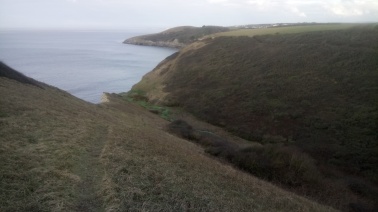 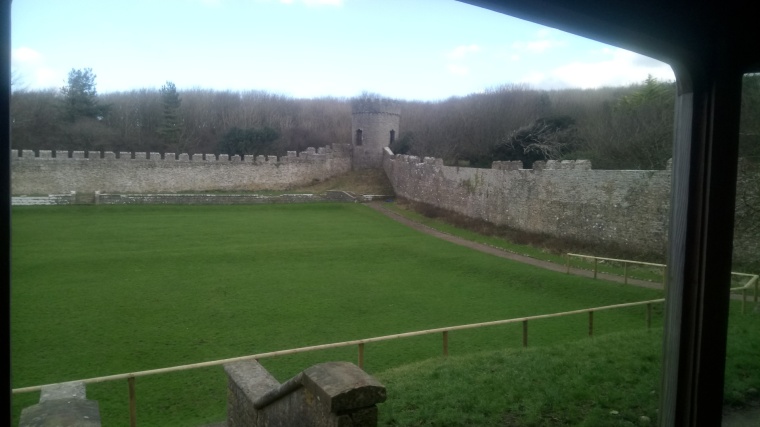 The natural coast is very photogenic and culminates in ancient  Dunraven walled gardens …..

…containing  the Ode to Dunraven Bay 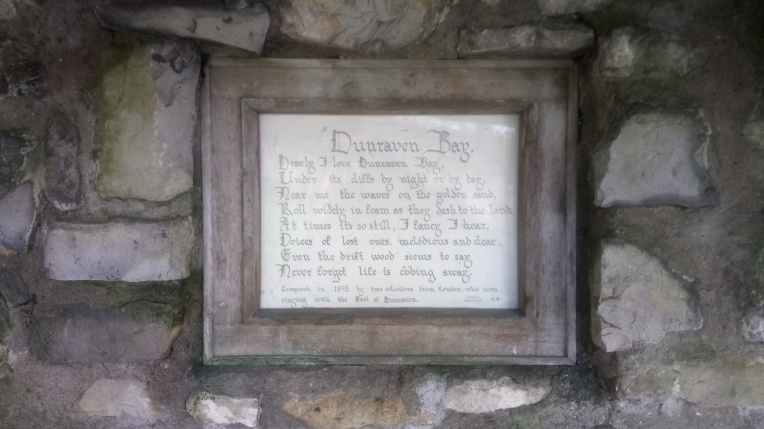 Moving quickly on towards Ogmore by Sea and The River Ogmore, the tide is going out and just maybe I’ll be able ford the river at the beach when the tide is at its lowest. Otherwise it’s a four mile detour to the nearest bridging point upstream 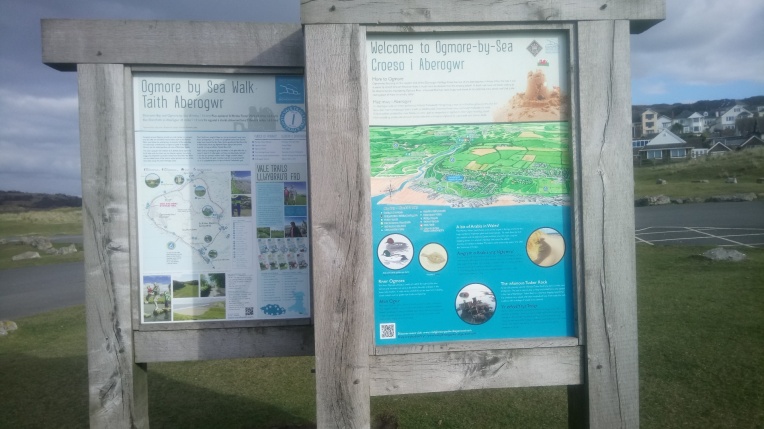 I arrived to find the  tide well out but the depth and speed of the river  too much for me, but on the map I spy a Weir, but getting there it is far from navigable and the same goes for a ford.

I eventually find a single lane bridge (below) serving the local sewage works on which I cheerfully  cross the now wider and deeper river. How that happens is beyond me since I’m going upstream.

Makes no difference  – I reach the other side only to be confronted by a human road block who will not allow me past. Apparently it’s a privately owned bridge and works are underway and I’m not permitted, and must return to the other side. I’m told that even further upstream there are  (maybe) stepping stones!

One thing leads to another and the first bridge leads to a second…….. 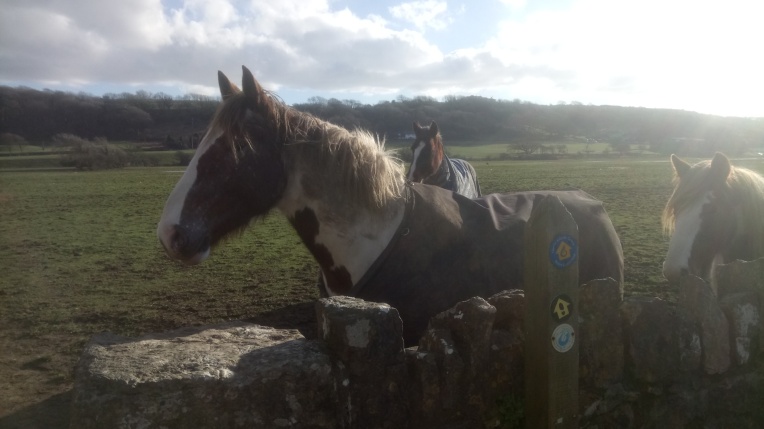 …….but I hadn’t reckoned on the guard horse unwilling to let me onto the bridge until I paid a bribe.

….at last I’m across not particularly dry because the shire horse field was understandably sodden with huge shire horsed size divots to fall in.

I followed the River back to the shoreline quite uneventfully, but slightly perturbed by the unexpected sand dunes also pocketed by hoof prints making the going quite strenuous.

Only  the Merthyr – mawr Warren to cross and I’m in Newton Burrows where  Nanny and Vicky should be awaiting my arrival, on the outskirts of Porthcawl. Back to The Ibis in Swansea. Good night! 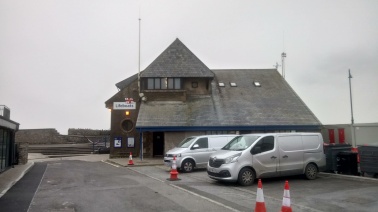 and home after walking 27 miles.