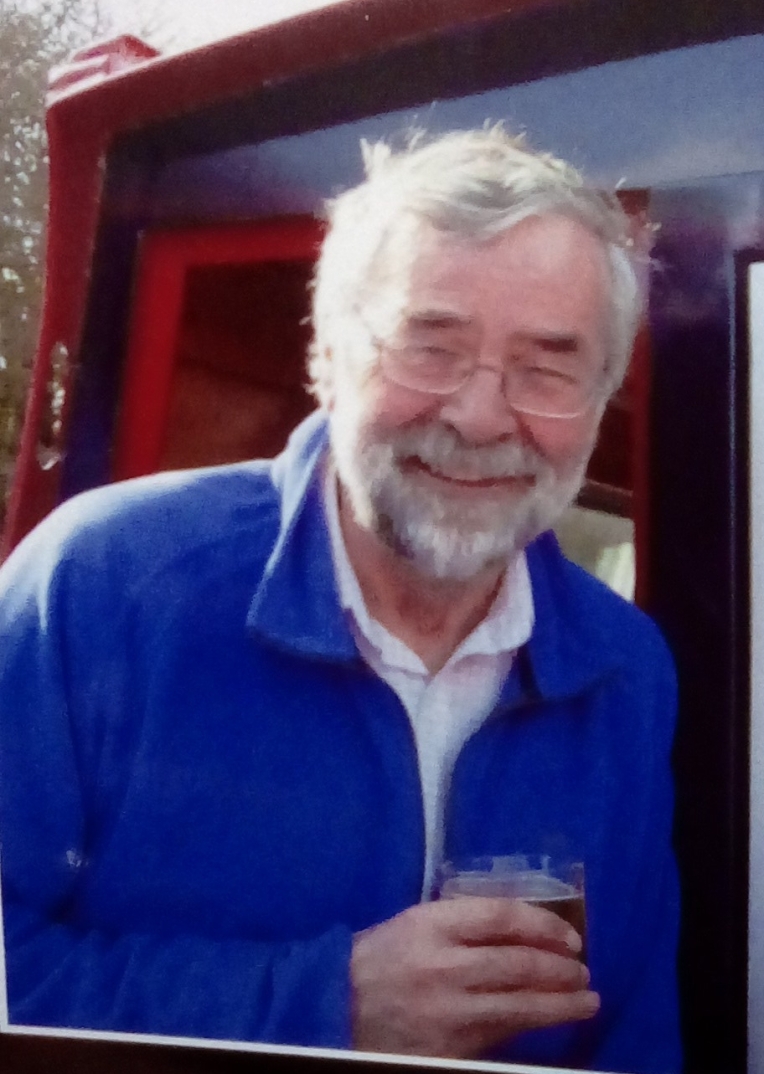 Dave Shipp was bi-local; he shared 1959-1966 with me, in  Shoebury and at Southend High School for Boys and then eventually in Llandudno Junction, North Wales, making him very local to the North Wales Coast Path around Llandudno,  Bangor Conwy, Anglesey,  Caernarfon and The Llyn Peninsular. I was hoping to hand over a great chunk of walking responsibility to him, in his  home Welsh  territory. I’m over the border in Shropshire and in need of a local guide to complete my Welsh circumnavigation.

Dave left behind a wonderful family and lovely wife Gill.  It was obvious when Marilyn and I  stayed with her that he was sorely missed. The house is bursting at the seams with Dave memorabilia. If it was curious, historical, bookish or Militaria then I’m sure Dave had it secreted away somewhere.

I have to congratulate Gill on her superb efforts as back up driver, tour guide, chef and hostess, obviously well schooled in walking with Dave, and dealing with his idiosyncrasies. I was well aware mine were up for discussion with Marilyn and Gill…. plenty to have a go at. 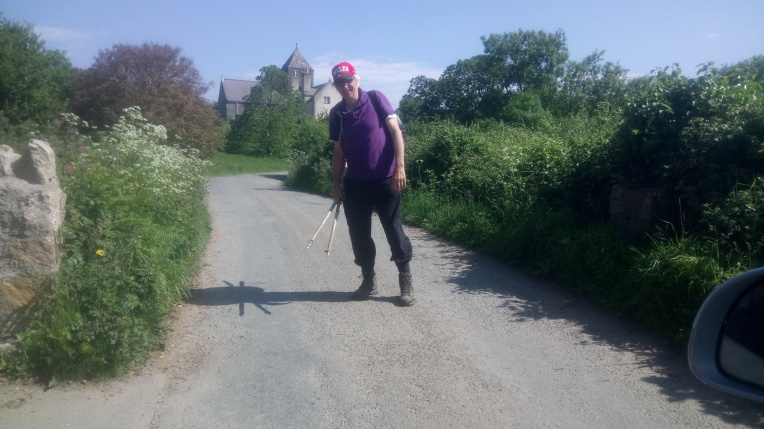 Unlike the solid British Isles Physical Map by courtesy of Ordnance Survey; my completed route overlaid in Scarlet. Just when I thought the Copyright Authorities were after me – I didn’t have written authority for using the map , although I’d spoken to a O/S gentleman several years ago and been given permission verbally. Recently, I’d heard a radio piece that warned of getting proper permission otherwise you can run up huge penalties , and what’s more, copyright  people operating on a “no win – no fee” basis are getting involved. I phoned O/S and spoke to lovely Linda who immediately reassured me that the map is OPEN DATA and available for my use, with scarlet worms and no written permission is required – despite the small print on the map. She even thanked me for acknowledging  “BY KIND PERMISSION OF ORDNANCE SURVEY” each time I use it. Thank you Linda and Ordnance Survey!

I   completed walking round England in July 2017, and by June 2018 reached Dulas Bay on Anglesey, North Wales; and beyond Llanelli in South Wales. I probably started all this around November 2013, on Offa’s Dyke Trail, near where we live on the Shropshire/Wales Border.

My previous visit to North Wales in January this year, was curtailed abruptly by the Beast from the EAST, version one. Rapidly deteriorating weather turning to heavy snow caused VERA’s dashboard to light up like a Christmas tree and the heater finally expired. I abandoned progress to my booked YHA Llanberris Bunkhouse at Llandudno and drove home, hoping VERA would get me there. She did, but faith in her future all round back-up capability was severely dented and even VICKY substituted occasionally. Intrepid explorers must have reliable gear, so it came to pass that, merciless as it may seem, VERA and VICKY were replaced by ZUD. This is his/her first round-Britain escapade.

Two unknowns have sneaked in there; in anthropomorphising (look it up) ZUD, I haven’t assigned a gender; m/f/n? I’m still coming to terms with the name! What do you think?

And (never begin a sentence with “and”), of course it should be “And”;

So; And notice how Walking round England morphed into England and Wales ; and now Britain. I have no explanation for either.(except I don’t like “so” either)

Get on with it.

The view from Dave and Gill’s sunroom by Gill – River Conwy middle distance.

I had always assumed that since this was Dave and Gill Shipp’s territory, I would hand over control of  North Wales Walking to Dave, but Dave died suddenly in September 2016, so, instead, I will dedicate my walking round Anglesey to his memory. Gill was there to play wonderful hostess and unexpected back up driver, and offer beds for the nights, Marilyn and I stayed over. The memory of Dave was everywhere; he collected anything and everything, particularly if it was curious, military, historical and books. He is still obviously very much sadly missed by his family and friends. And me. I shall just have to get lost, on my own , without him. Somehow I don’t think he would have approved of my no longer drinking alcohol….. Walk on , Dave!

Let us begin this trip – returning to Bangor Pier with Marilyn, leaving me on the exact spot where I had fetched up last visit. I get very ocd about starting where I finished. No missing bits on my walks.! Heading off to Anglesey – leaving the mainland via Menai Bridge. 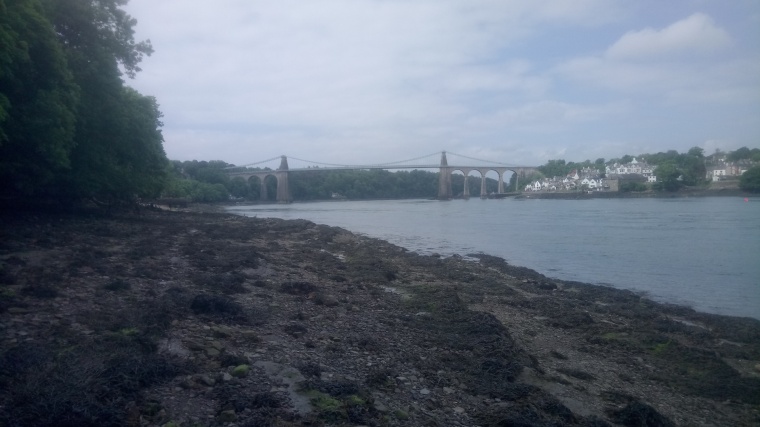 Walking the banks of the Menai Straits until I got to the Raft Race Finish on the seaward side of Telford’s  Menai Bridge. It was Carnival day and they’d also closed the bridge to film Dr Doolittle. I wondered how I was to get across – my own raft? 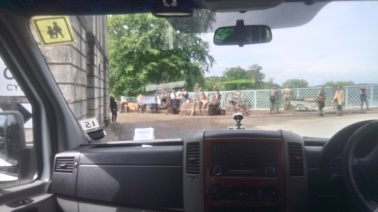 The film crew had laid on a shuttle bus, but I still complained that my walk round Britain would be bereft of one full bridge span – enough to get me disqualified or accused of short cuts. “Come back after four and you can walk – the giraffe will be bedded down for the night”. Can you see the giraffe? Amazing what CGI can do. Meanwhile a cycle group had approached the far side and negotiations were taking place. I was told the Brittania bridge was also closed. 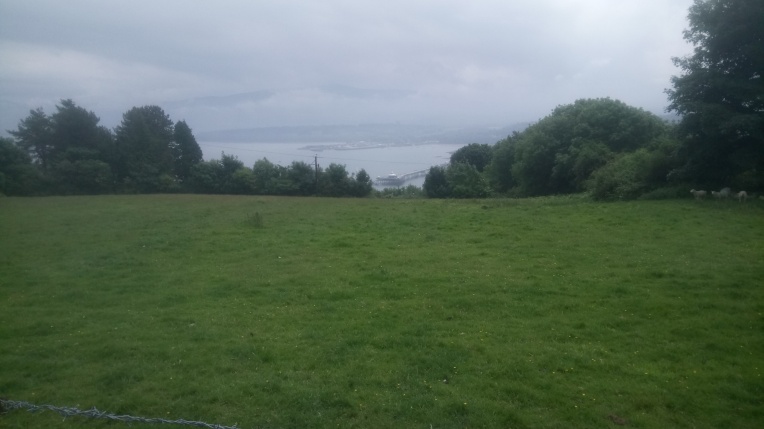 Two more mugs from RNLI BEAUMARIS and the Lifeboat Station 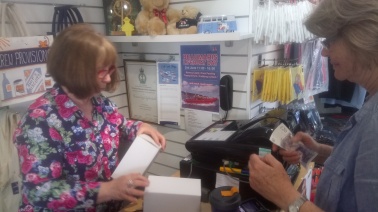 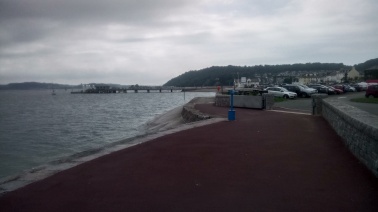 Heading for Puffin Island which is low on Puffins and the Straits with the tide out – end of day one.. and it was a hot one too!

DAY TWO began very misty after yesterday’s heat.. Returning to Penmon Priory near Puffin Island, Gill and Marilyn delivered me to the re-start before heading off for clotted cream ice cream scones at Plas Newydd, National Trust, The Marquess of Anglesey’s pad  etc..I kept to my water,fruit, figs and prunes and The Wales Coast Path – or nearly…. 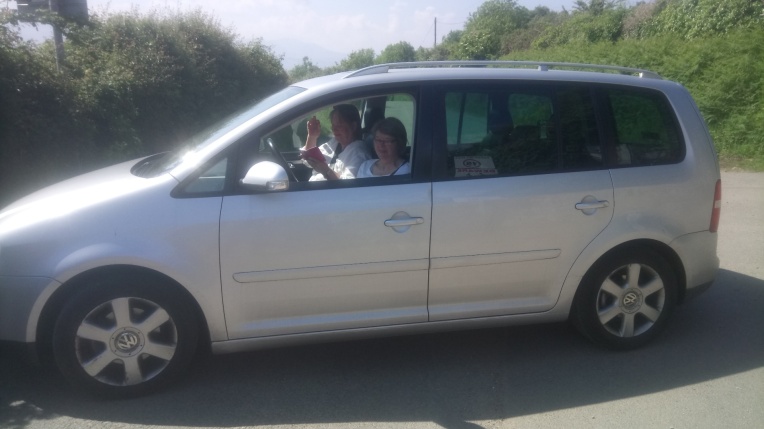 As I left Penmon, the Wales Coast Path became a series of fields with irregular boundaries bounded by huge stone walls or derelict fencing, all full of cattle or sheep. Generally they moved aside as I approached except on one occasion the cows and calves remained crowded round a stile I needed to climb. The calves were very young and the mothers very protective and bellowing. They were agitated by my presence and started getting belligerent . I looked for an escape route and only the high stone wall looked possible. I wasted half an hour good walking time trying to keep safe and eventually the cows realised I wasn’t a threat and I hurriedly climbed down  and over the stile only to confront the bull in the next field separated from me by a flimsy gate.   I  also hurried out of that field. 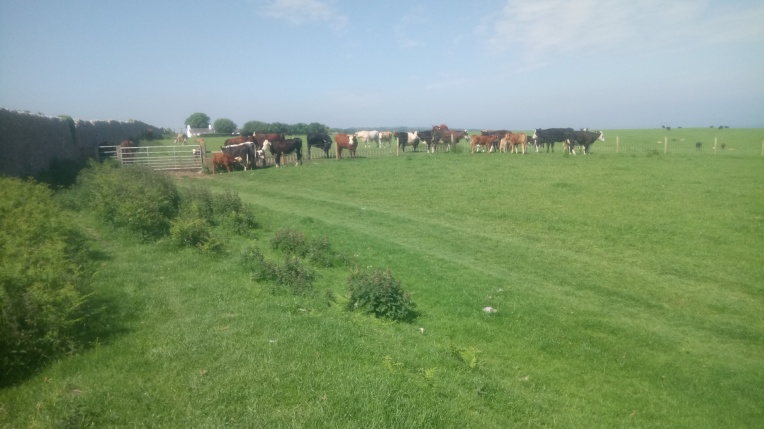 Well – you would wouldn’t you

I was closing in on Red Wharf Bay but somewhere around Bwrdd Arthur, the Wales Coast Path became diverted and I contacted the ladies to advise my several delays and change the rendezvous to somewhere nearer – we ended up meeting at Brynn Hrddin for my late lunch.

Diversion signs above eventually lead me to Red Wharf Bay below 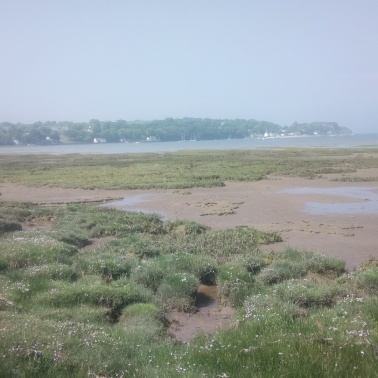 After a delayed lunch, there was time to stroll into Red Wharf Bay town, where Gill and Marilyn force fed me a 99 ice cream and persuaded  me it was hot enough to end today’s walk after 10 miles.

Home to Gill’s where more than enough good food and drink lay in wait to restore tired and overheated bodies, while we admired the view of The River Conwy.

The final day began with another Gill breakfast before saying farewell  as we headed back to Red Dwarf Bay unaccompanied to The Pilot Inn, Dulas Bay via Benllech and Moelfre. The following pictures say it all – there’s some serious scenery…. 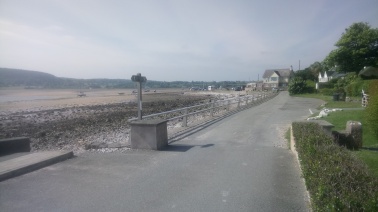 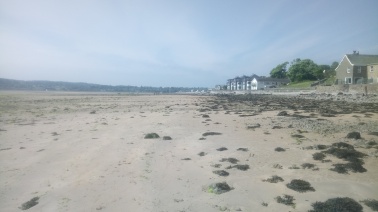 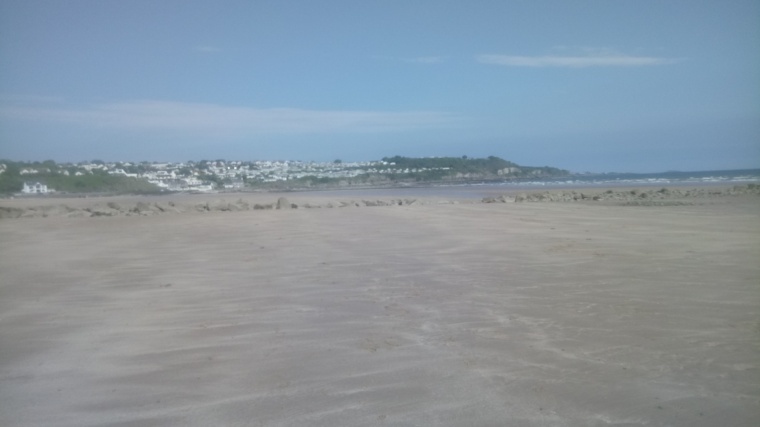 But not without incident – The Route was barred  due to landslips but someone had decided to scrawl that it was actually safe – but at your own risk. Nuff said.

And the scenery goes on… 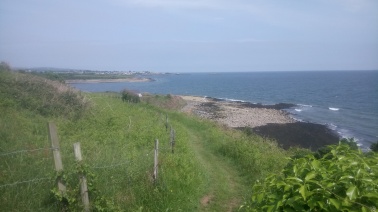 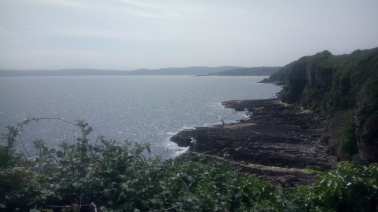 Until I met this lady with bags asking for “help”…

Which was at hand with the Life Boat Station just around the corner.. 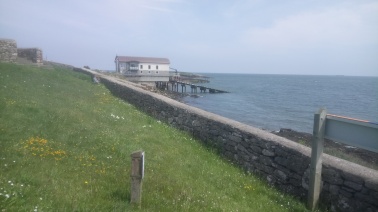 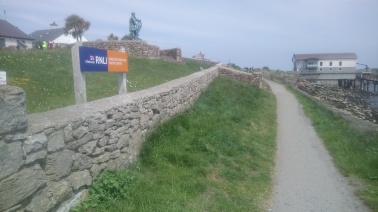 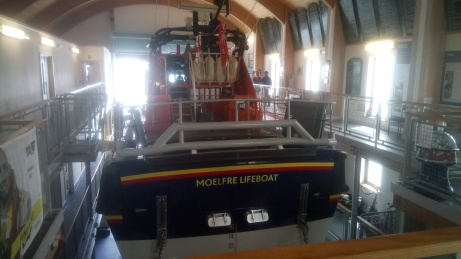 Of course the gift shop suffered, more mugs, early Christmas Cards, sun hat, notes, badges – only essentials – and lunch. But we had promised our late, long term  friend and  neighbour Pam to give to RNLI – such a worthwhile cause. I’m sure Dave would have approved; if only you go back to early Episodes to read how we capsized a canoe, and not wanting to cause a fuss, made out we were not in danger of being swept out by the outgoing tide round Shoebury Ness. A narrow call   between ending up drowned or exhausted trespassing on AWRE forbidden beaches – officers use only. My regular walk donations are more to thank them that they would have rescued us if we’d called for help!

A real emergency costing over 400 lives when the Royal Charter went on the rocks around Lligwy Bay in 1859 – the monument and storyboard commemorates the tragedy. 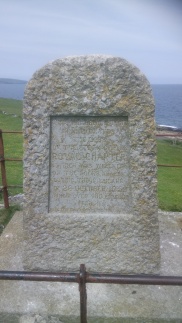 And on that note I decide to head inland and complete the day’s walking. Dulas Bay represents a two or three mile diversion to ford the Afon Goch. It looks like a corner waiting to be cut. The tide was out, the sands exposed. What could go wrong, I could be at Porto Bello opposite in a trice. No let’s go home – solve that problem next time.. 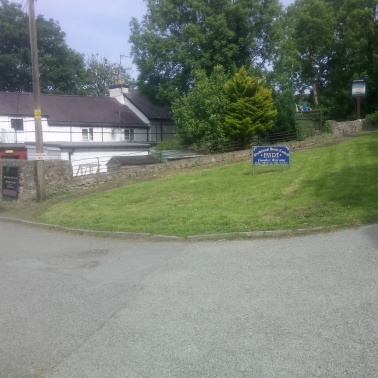 The Pilot Inn alongside ZUD and Nanny waiting in the A5025 layby near Pentre Eirianell, my start point next visit.