I’m closing in on Aberystwyth. The Welsh Coast Path  gap is reducing. although  I suspect the Completion Party  must still be a year away. Guess who lives under the drawing pin on the Border about level with Aberystwyth but separated by The Cambrians?

Certainly not many people, mostly sheep, shepherds and sheepdogs. Qualify for the celebration by joining the walk – previous English Coast Path experience does not count. 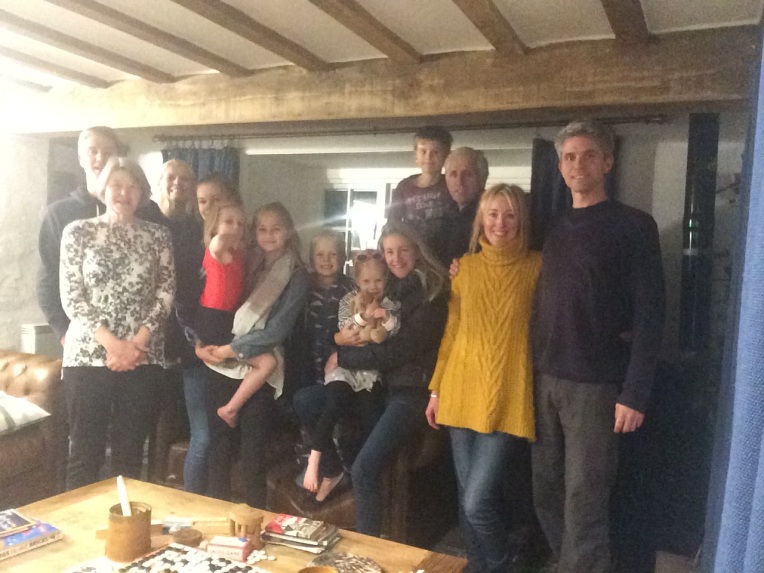 Nearly everyone gathered at The Mill on Saturday  – thank you for a restful weekend of football, bulldogs, tag rugby, table tennis and some quiet drumming – along with plenty of Nanny’s cooking. All contrived to give me the quickest recovery from last week’s walk described below.

I’ve just returned from my trek round Holyhead on the Isle of Angelsey and tidying  up a few  messy, awkward-to-reach  areas leaving me heading for The Menai Strait at  Llangadwaladr near Bodorgan Railway Station. Trains stop if you’ve ask politely. I say trains – does one carriage constitute a train? No criticism – the service was excellent – and the fares reasonable with my Oldie Rail card and the staff helpful. 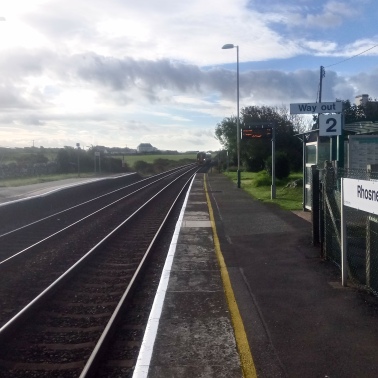 I based myself at Rhosneigr Shoreside Camp Site again with adjacent Railway Station and the trains, with some bus assistance, allowed me to keep  to the wandering Welsh  Coast Path.  The route was so tortuous that a thick scarlet line on the  map above does not do justice to the detailed planning needed to keep on course.  The signage could be better!

I would guess that Holyhead and its environs has the most concentrated Coast Paths in any given area. The OS Explorer Map 262 has taken a battering, fortunately I’m heading off towards Snowdonia and The Llyn Peninsular just in time I’m moving onto a new map

On three separate days I walked myself to a standstill.  Monday , my legs gave up early evening, outside John Heywood’s pub at Tyn Rhos near Trearddur,  I couldn’t help but stop at The Gwynfair Family Pub, with such a helpful host, who negotiated B&B Options and Taxi fares by phone  for me whilst I re-hydrated on lime and lemonade, and nibbles. I opted for  the taxi ride back to the tent. Ten miles walked not including taxi distance.

On Tuesday , I walked from Holyhead, trying to link up with Monday’s finish line, but again, after 12 miles, about a mile short of the intended  finish at John’s pub, my legs refused to do anything past Treardurr except clamber on board a bus back to Holyhead. This was the result of ascending Holyhead Mountain, 220 metres, earlier in the day. I returned to complete the stretch the following day.

After finishing  that off, six miles, first thing Wednesday, I headed off by train to Bodorgan and walked to the Wales Coast Path at Llangadwaladr.  I would have been ok to get back to the tent at Rhosneigr, but after  the WCP took me past a Fish and chip shop. Say no more. The eleven mile walk took seriously longer than it should have done

Again I made up the shortage and short cuts of six miles  next day, before breaking camp and heading off for the train with maximum load in my rucksack. I’d allowed an hour to travel a few hundred yards to Rhosneigr Station – I just made it. From now on I only had to manhandle the rucksack  from train to train to train – not even changing platforms.

And who greeted me at Knighton Station – Stan , Rowan and Nanny… and ZUD.

They bet me five cheddar biscuits that they could lift my rucksack. I had to pay up – twice! 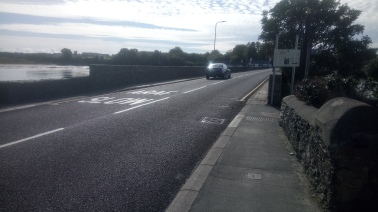 Quite level so far still heading for Trearddur… 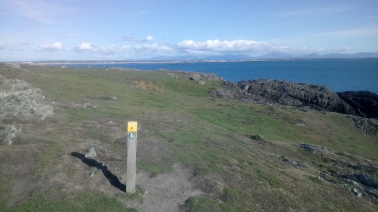 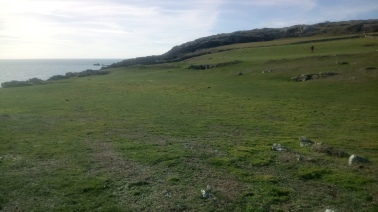 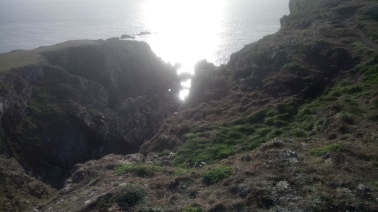 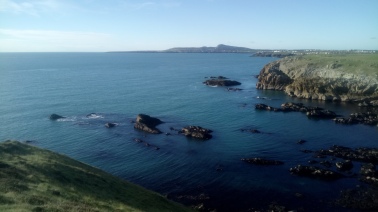 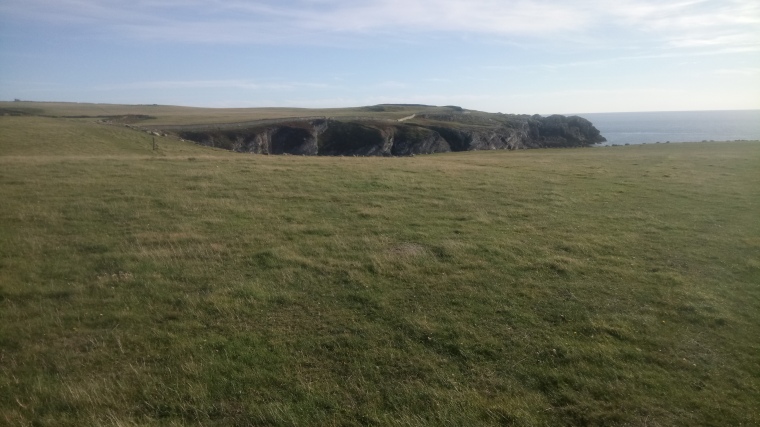 it was about now I realised my legs wouldn’t carry me much further and after asking other walkers discovered tha there was a pub nearby with a pleasant landlord who could advise on accommodation or transport….. 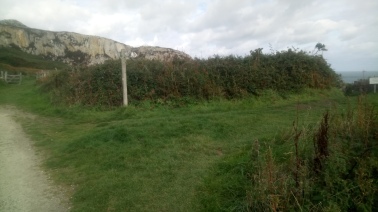 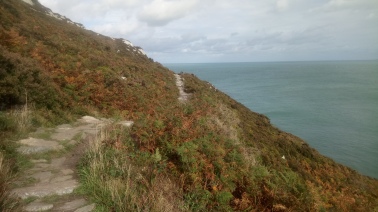 Heading for  Holyhead Mountain – not flat any more  – and it gets worse! 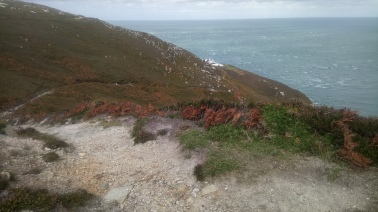 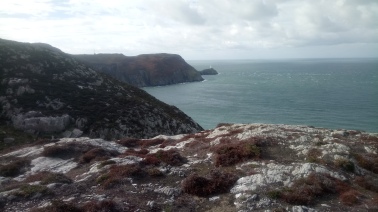 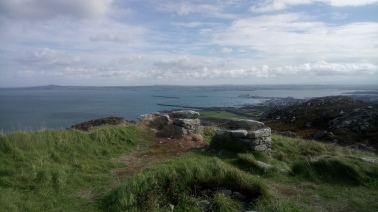 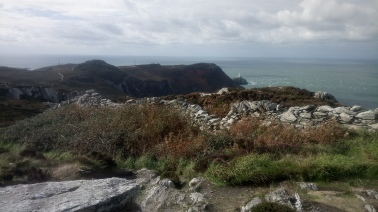 Passing North Stack on the climb to The Mountain – ferry anyone? 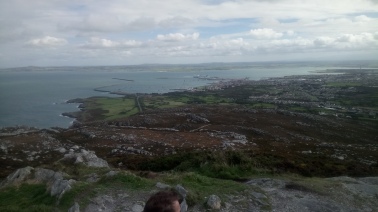 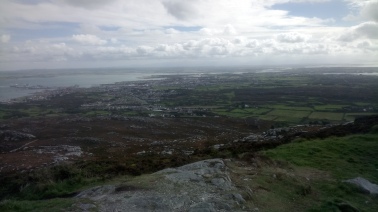 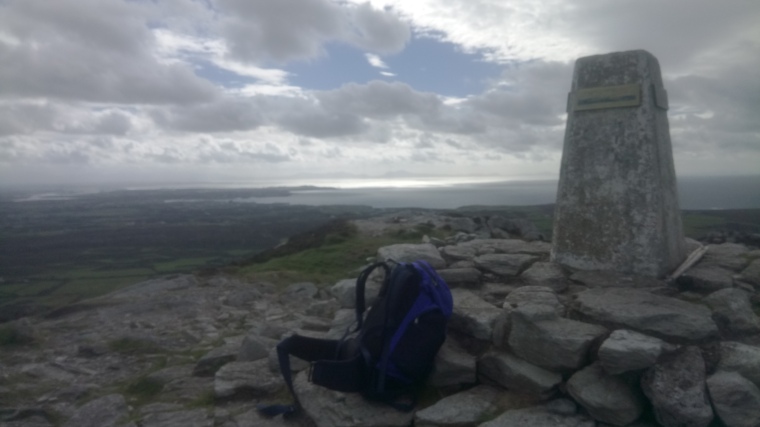 View of the top and views from the top – Holyhead Mountain. Rain was threatening and no shelter..

Shelter! And picture one is the top of the Mountain – picture two is South Stack Lighthouse. 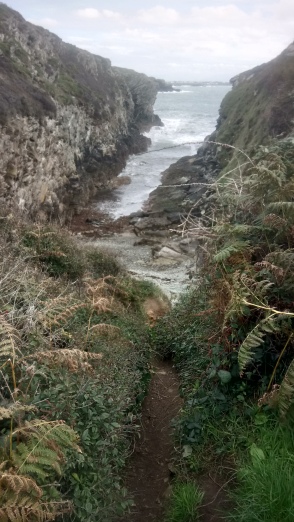 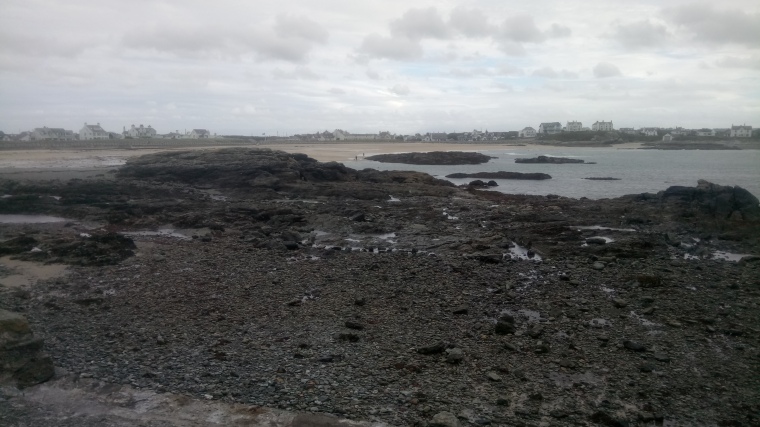 A variety of inlets on the Coast Path heading for Trearddur. 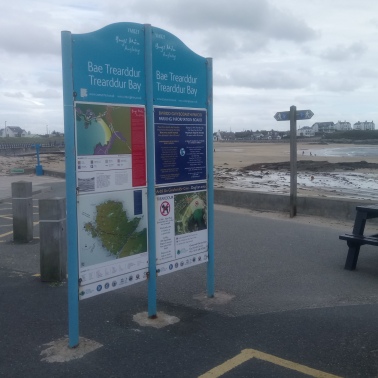 Found myself on a bus route back to Holyhead or forward to Rhosneigr – Holyhead bus came along first – so I took it!  I didn’t know how close I was to joining up with yesterday’s finish. 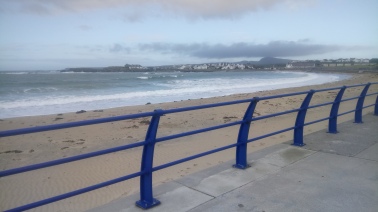 And start from Bodorgan Station  and join the WCP at Llangadwaladr

Finally these bullocks ganged up on me  and prevented me using the Wales Coast Path so I took a diversion and headed back to the tent via the road. I corrected any errors and short cuts the last day of walking totalling 45 miles over three full days.