The green pin marks the western extent of by cf my Welsh forays, and the yellow pin on Angelsey marks how near I am to completing that Island.

My estimate from the Wales Coast Path distance tables is about 450 miles to walk from Anglesey to Saundersfoot.

Below – to put into perspective and at greatly reduced scale I’ve acknowledged Mainland Scotland. Just because the tip of Northern Ireland has crept in and aussie,  a bit of Calais, do not for one moment consider I’m widening my horizons

One mile allowed for crossing the River Towy – Ferryside to Llansteffan, plus 27 walking The Wales Coast Path from Pentowyn via St Clears, Laugharne, Pendine, Amroth to Saundersfoot just a few miles short of Tenby, in two Days. One night in the Tenby Premier Inn, with no car parking, shifting from O S Map 177 to Map OL36 , bringing Grand Totals to 3,823 Miles in 310 Walking Days since November 2013

Who is missing…..? Un lucky thirteen. Must be behind the camera – that’s alright then.. Fabulous weekend followed by a trip in a boat with Wheels

Even though we hadn’t fully recovered from the above Mill family gathering, when we heard the new Amphibious Ferry across the River Towy was  now afloat and plying its trade between Ferryside and Llansteffan on the Southern Wales Coast Path, Nanny , Bobl and ZUD arranged a quickfire visit. Even the weather was in our favour. This was meant to be!

On our previous Wales Coast Path excursion to The Rivers Towie and Taf, we left un-finished business because the last ferry from Ferryside to Llansteffan left 60 years ago, and I’d rather mistakenly thought there ought to be a similar service from Pentowyn to the Dylan Thomas Boathouse. Maybe there was previously but all that was left was hugely overgrown or turned touristy – everything was preceded by “Dylan Thomas”.

We had consulted the internet and all the evidence was that a brand new  ferry was due to leave Ferryside at nine thirty. We arrived early hoping to see activity on the incoming tide, but no signs except the timetable confirming the correct departure  time. Until movement in the carpark and boatyard  evidenced the ferry coming towards us on the road! It drove cautiously towards the beach and entered the water, powered its 230horsepower outboard motors and headed for the official landing point back up on the beach again, where a huddle of excited passengers waited to board. 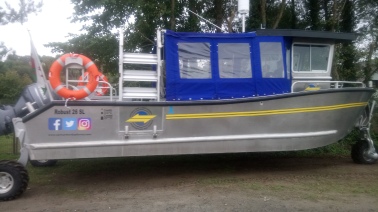 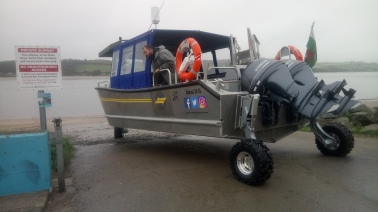 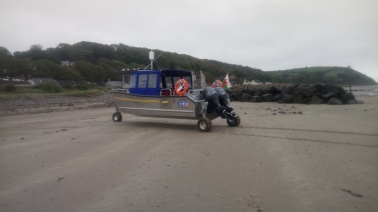 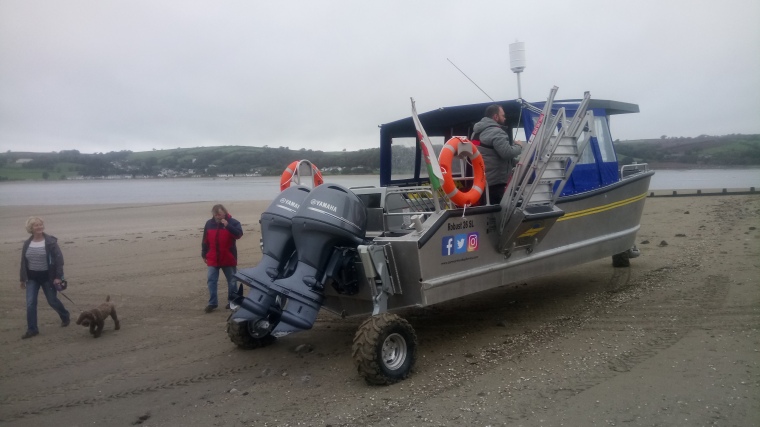 And board they did, clambering up the steps. Notice the three wheel drive, plus twin outboards for the river crossing. A petrol engine provides  power for the three electric motors whilst on land. Captain Ann and mate Liam, must demonstrate a very clever technique and teamwork particularly in the transition phase entering and leaving the water where the balance of power transfers from wheels to props and vice versa. I would imagine on days less calm than today it can get interesting.

The actual voyage was soon over as the vessel headed for the beach on the Llansteffan side….

Lifejackets must be worn! 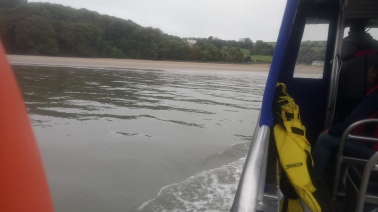 And here we are, completely dry on the Llanstaffan side waiting for returning passengers. Carmarthen Bay Ferries operate the ‘Glansteffan’. The crew of Captain Ann and Mate Liam are very pleasant, skilled and obviously enjoying their new toy. It has only just started and they hope to expand this community service and extend to trips around the area. Good luck! Get in touch    https://carmarthenbayferries.co.uk

I’m very impressed particularly by the need not to walk the banks of The River Towy to Carmarthen and back  – a day’s non-coastal walking just to get to the other side!

Not so lucky with the River Taf – not to be confused with the River Taff – located alongside the Millennium Stadium in Cardiff. At Pentowyn I could see across to Dylan Thomas’ Boathouse, but to cross The Taf I had to walk the banks to St Clears and sometimes follow the heavily trafficked lanes which was not so safe, as they are not the widest. But they are making an effort…..

Above the banks of The River Taf from Pentowyn to  Laugharne via St Clears. On the run in to The Castle I passed Dylan Thomas’Writing Shed  – a converted garage attached to a Boat house he rented. Notice I’ve been playing in the mud again – my usual trick of walking in the river rather than alongside. No wonder my boots don’t last.

End of Day one  not under canvas tonight – a hotel bed in the very pleasant place known as Tenby, where the only problem is parking. I’m being unfair – having walked nearly 4,000 miles what’s another half mile from car to hotel with heavy baggage and weary feet. But we didn’t leave the hotel again till we’d supped a large evening meal and awoke to an enormous full English/Welsh breakfast. I think we’ll need to stay here again. In fact I’m sure.

Result One mile awarded for the boat trip and twelve miles walking.

Day two. Target – from Laugharne Castle –  As near to Tenby as I can get.

The first five miles is all inland as there is a militarised danger zone keeping civilians off Laugharne and Pendine Sands – beautiful open level sands where early speed trials were organised and land speed records were broken.

I didn’t get back to my favourite coastal walking alongside seashore, waves  or cliffs but had to bear the traffic again and the army occupation for some time. When I did I was made to pay. In short order there were at least five rapid ascents and descents all of which were beautiful but  made me regret deliberately leaving my sticks behind. It was probably as foolish an experiment as thinking I could cope with a full rucksack or not write a blog; or even trust Millets to end my hiking tent saga to my benefit. 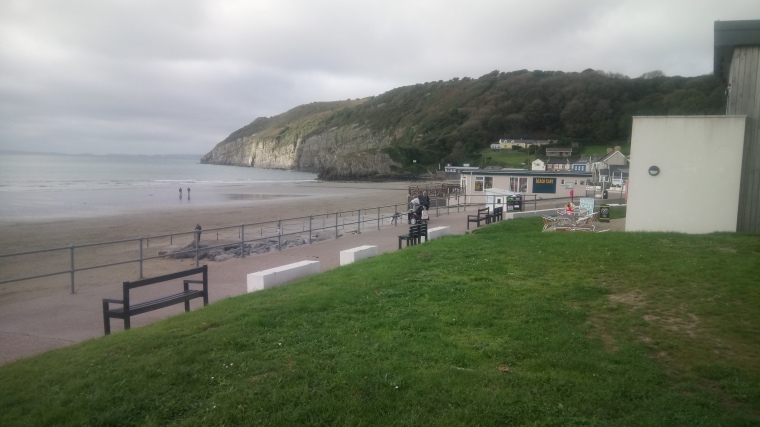 Leaving Dylan Thomas behind after following his Birthday path was actually quite sad because the beautiful Welsh scenery that he had absorbed rapidly changed to a polluted shoreline or marshes, followed by merging the path with the main road and a disproportionate number of quarry trucks servicing a very unpleasant, dusty, noisy quarry.  All conspired to keep my camera  in my pocket until I got to Pendine, bottom above – or above bottom? Little did I know those picturesque hills were about as walking friendly as the militarised zone , traffic, quarry and flotsam and jetsam all rolled into one. But beautiful enough to fill my camera lens.

Just scroll on – don’t think of the pain I went through to get these photos. 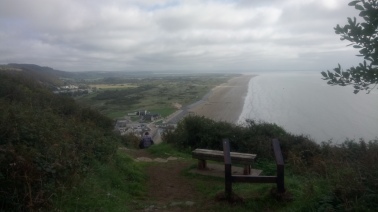 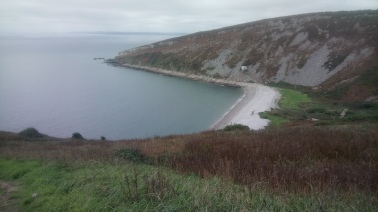 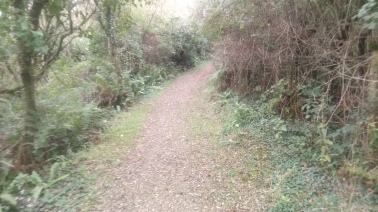 …..Only alleviated by constant rendezvous with Nanny and ZUD for rest and refreshments along the way. The bottom picture is at Amroth Castle with Saundersfoot in the middle horizon. 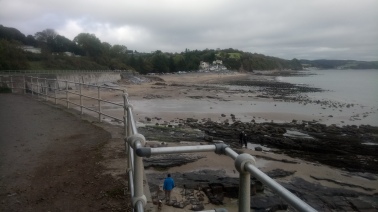 And Saundersfoot is just the other end of the tunnel… guess who’s waiting ?

Unfortunately I ran out of steam at the other end of the tunnel  after fifteen miles today, and marked my territory  and headed home.  That’s 3,823 miles around England and Wales so far. Next time I’ll give an estimate to the finish…..

Thank you Nanny and ZUD!

If you’re interested in how the Millets saga is playing out – so far I’ve had my money refunded; but purchasing the equivalent goods via their shop in Hereford resulted in paying more for the sleep mat and would have been considerably more for the tent, so I did not purchase it. Instead I’ll keep going with my two man tent which means I can get the rucksack in, if I sacrifice a few duvets….

Incidentally there was no explanation following their detailed investigation. I think they might have apologised.