I’ve been away for a while, having a rest from walking, camping and  blogging – but I’m back  now, slightly overweight and struggling to get back into the swim of things, but the tide will turn and when I find my seal egs it will be all plain sailing…. 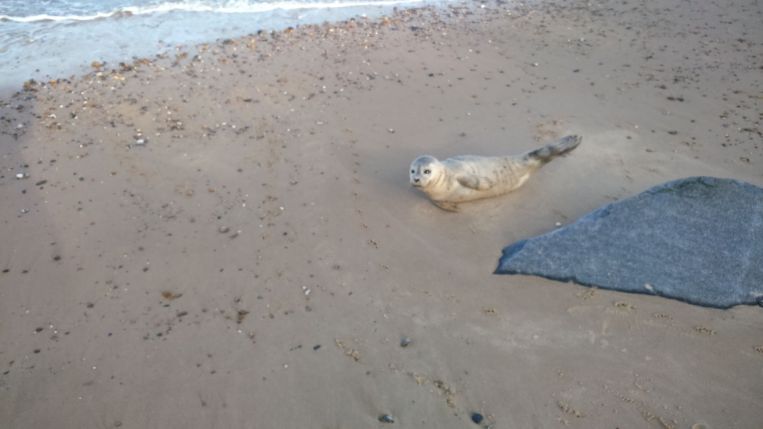 You have unluckily found your way onto my report back to our Grandchildren, Rosie, Lauren, Stan, Jake, Rowan and Maisie, about the continuing ramblings of an intrepid England coastal circumnavigator as I meander  my way  around the proposed England Coast Path after the fashion of G K Chesterton’s  “Rolling English Road”. You know the one where he says…”The night I went to Birmingham by way of Beachy Head”…. or “the Day   I  went to Glastonbury by way of Goodwin Sands”  – or my version this last week – the time I went to Crazy Mary’s by way of Caister -on-Sea – nearly works! Read on to learn all about Crazy Mary……. Spooky?

Adding in the 34 miles this trip, I have stumbled 2544 miles in 187 walking days, spread over about 33 months. ‘About’ because there is doubt about when I  decided I was really doing it; now I have estimated I have about 530 miles to complete, I think I can claim to be  underway. It’s all downhill from now, except most of the remaining trek is on the South West Coast Path which I have found so far to be very uphill as well. And of course, I do go off course , a lot,  so the numbers are merely academic.

I’m resuming on the Norfolk/ Suffolk Coast Path walk after our summer break, brought about to avoid walking in the heat and copious tourists getting in the way and trampled underfoot. Back on the road again I noticed things have changed. Analogous to my phone and broadband, I’m slower, lack energy and I’ve lost more memory, and bits of me that haven’t already fallen off seem to hurt more. Also, I’m now reporting in  on Nanny’s borrowed laptop since mine Brexited early following La Summer break in France. On returning to blighty, we appeared to forfeit our right to the Internet; not only that – we had 15 litres of English diesel, and the can, confiscated by the Gendarmerie despite our protestations that the French Oil Refineries were likely to strike at any time. On principle, I never argue with any female  gendarmes wearing side arms. That is not sexist, but just entente cordiale.

Without fear or favour, and to show I’m not racist either, this trip, I have had a walk- in with the Suffolk Constabulary over their right to park a mobile speed detector van on the footpath. He did not wear a side arm, so I was a little more opinionated…. for the purposes of this blog  I am predominately a pedestrian, but at other times, also a driver too, and  occasional dog walker, child minder, bus passenger, cyclist and future mobility scooter operator… roads are for vehicles, paths are for the  others, and I’m concerned about the increasing intrusion of one over the other.   I think I offered a sustainable case until he responded ” and your point is…..?” I detected this was another way of saying you are wasting Police time.

But I have learnt that the most dangerous parts of all my rural walking adventures  are when I’m directed onto the highways and byways and footpaths disappear or are blocked and overgrown and pedestrians are forced into the roadway vying  with traffic entitled to travel at sixty mph. In urban situations, cyclists seem to be permitted to seek refuge on the footpaths, all-terrain four wheel drive pushchairs and mobility scooters run amok and dog leads get longer by the hour, and other traffic appears entitled to park and manoeuvre on paths if the road is not wide enough. Rant over.

As usual I have wandered off piste. Back to the Coast Path.Arriving in Scratby near California, I took up my pitch at the Scratby Hall Campsite, who are recovering from the seasonal load, with plenty of space and generous facilities (heated swimming pool) and very helpful staff. Beyond their control was the hacking smoker’s cough of an occupant(e) of the nearest tent and the farmer’s bird scarer in the next field. But I was off walking at Sparrowfart, so neither intrusion got to me.

Inside and outside the tent at Scratby Hall Farm; not a lot of room either way.

The weather and buses were excellent; Scratby Hall Campsite gave me a comprehensive bus leaflet with routes, maps and times, and I flashed my elderly  bus pass with great effect over all three walking days on the 1, 8 and 99 routes which maximised my walking time and ferried me to and fro from walk starts to finishes. The drivers were good too; one time on the 99 a passenger pointed out an elderly lady in the distance who he knew wanted to catch this bus. The driver patiently waited several minutes on  until she boarded. 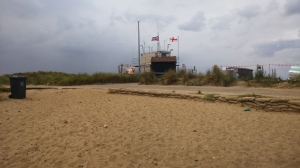 The Coast watch Station at  Winterton-on- Sea,   finish for Episode 66 and  starting point of this Stretch.

As I was saying! I resumed the Walk from Winterton on Sea , halfway down O/S Explorer Map OL 40 The Broads – this took a battering as it is a double sided map – not a good idea – I can imagine it as pulp if the weather had been inclement. Fortunately it becomes  Explorer Map Number 231 at Crazy Mary’s Hole.

Walking South and keeping to the coast, except where forced inland by cliff collapses, I soon regained my stride passing through Caister-on-Sea to Great Yarmouth. Crossing the River Yare involved a huge U-turn and detour of about six miles to end up in Gorleston-on-Sea. Back on the coast, I headed for Lowestoft promenade via Hopton-on-Sea, Corton and Gunton. After traversing Lowestoft Docks I found the start of the Suffolk Coast Path and followed it along the coast to Pakefield where the path turned inland to join the A12. I found a bus stop level with Crazy Mary’s Hole, and didn’t wait long for the Number 99 to pick me up and return me to the car. And the tent and off home very early next morning.

Now for the pictures…..

Back on the coast again, my old friends from the previous trip were swimming along with me 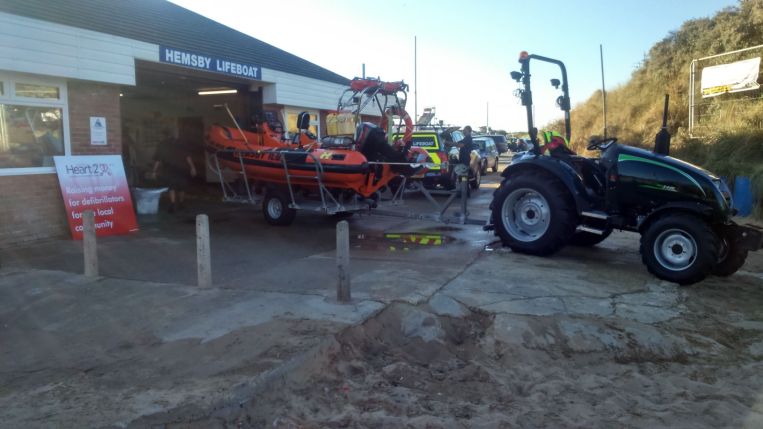 ….and the Hemsby Lifeboat being tucked up for the night…. 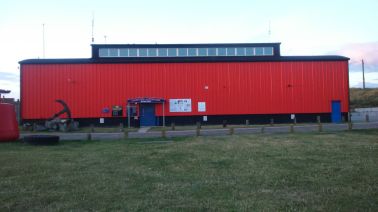 …..and Caister Lifeboat Shed was not open for business, so no souvenirs, only their information plaque. It  is an independent station funded locally and by Jim Davidson after whom two boats were named.        Donner und Blitzen? 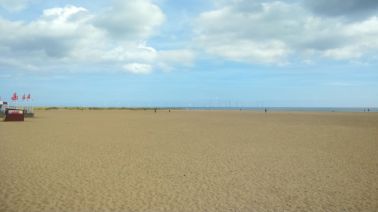 Scroby Sands Wind Farm is the longest established offshore array in the British Isles. I spent some time with their Engineers discussing  facts and myths about wind turbines.  In an earlier Episode I described being waylaid by a couple very opposed to offshore wind farms . I recalled most of their arguments and played devil’s advocate only to be comprehensively swatted away. The future’s bright – the future’s e-on  (if it’s windy) 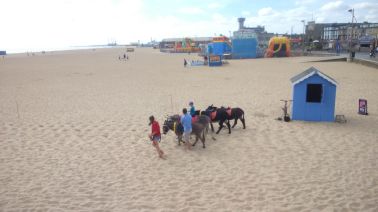 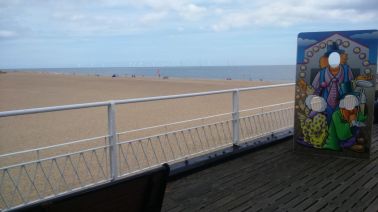 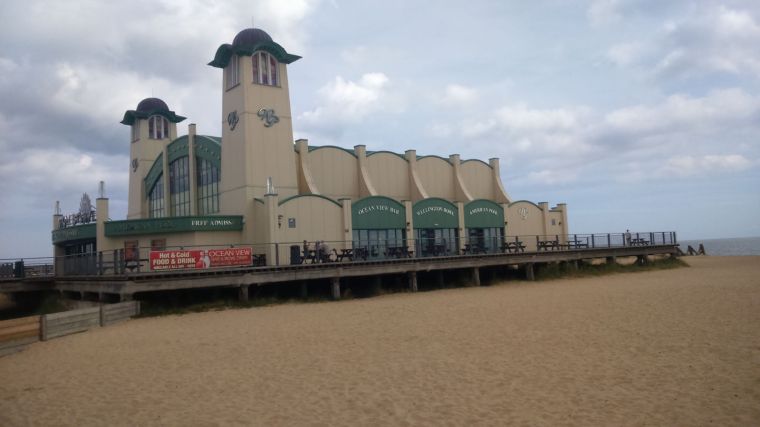 Postcards from Great Yarmouth – oh I do love to be beside the seaside….  I went out as far as allowed on Brittania Pier and Wellington Pier…. not very far compared to Southend Pier!

Further down the coast towards the docks I was also denied access to the North Pier at South Denes despite grovelling in the reception of the Harbour Master – H and S – I have an address to write to but life’s too short.

Departing from the coast again and walking back along the River Yare and the berths servicing the offshore industry. Then doubling back on the West Bank towards Gorlestone-on-Sea and the South Pier which I could access. 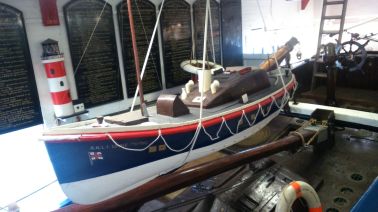 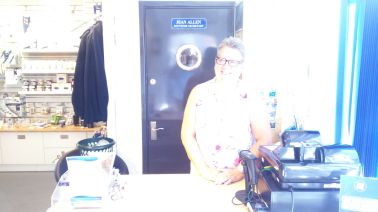 Gorlestone and South Pier, home of RNLI Lifeboats and  giftshop with volunteer Jane, and lifeboats old and new. 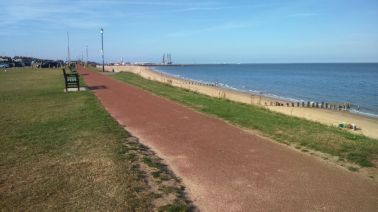 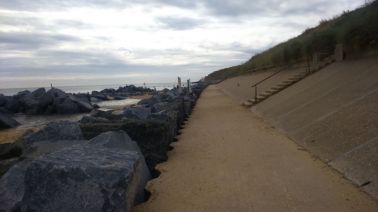 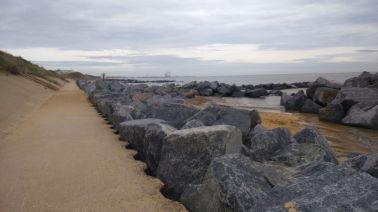 Leaving Great Yarmouth and Gorlestone for Lowestoft, the coastline is  more fragile and comprehensively propped up, baffled and protected by rip rap rocks. 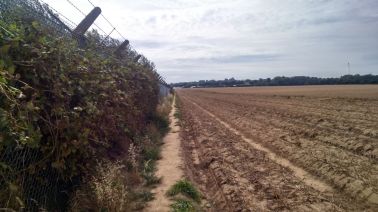 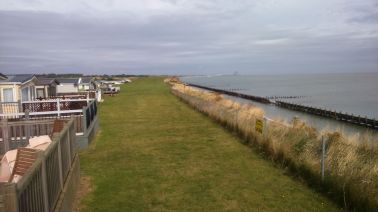 And then the path disappeared and took the signage with it, forcing me onto the coast road with no footpath but plenty of drivers who wanted to wipe me out. 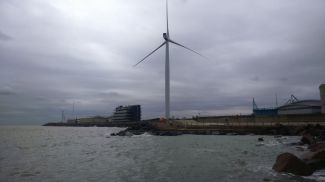 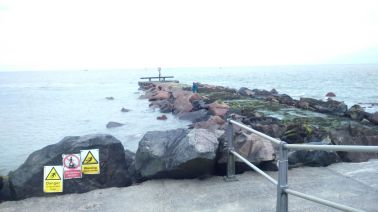 Richard had numerous tall lobsterman tales to tell and knew every nook and cranny of the groyne, and every fish caught and nearby disaster and drowning. I spent an interesting hour or so re-charging my batteries. I wonder if he lives there? I forgot to ask about Crazy Mary. 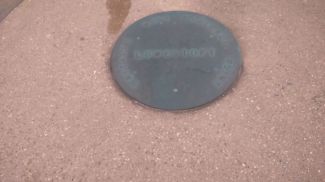 The Euroscope at Ness Point, the most Easterly bit of natural mainland, identifying all the compass points and destinations round Britain and the World. From there I could have set off in the right direction for Land’s End or John O’Groats.  But I’d soon get lost.

Hamilton Dock. Yet again I was stopped going into docklands by security, but this time Guard Kevin made up for it and I lost yet another hour to stories of a memory challenged little old lady trying to break in to meet her boyfriends in the hidden caves beneath the piers; the diver who was chased off his job by a guard lobster that severed his finger and slashed at his legs – he needed an ambulance; and the illicit early morning setting-off of an emergency repeater flare that attracted the police and the press; and the pet dog given an industrial fluorescent warning gizmo so his owner could see him in the dark, off the lead – unfortunately others mistook it for an UFO  – much to the delight of the local papers. Still no sightings of Crazy Mary.

The A12 and the coast footpath share the lift bridge over Oulton Broad. Traffic chaos ensues whenever  a boat requires the bridge to be lifted, much to the consternation of the local wine group, who ,when upright have a reserved view of proceedings. Is Crazy Mary there?

RNLI at Lowestoft South Pier, lady volunteers June and Ann served me my lifeboat mug. I think I must have collected about half the fleet’s mugs on my journey round England. I’ll have to go around again to pick up those I missed . 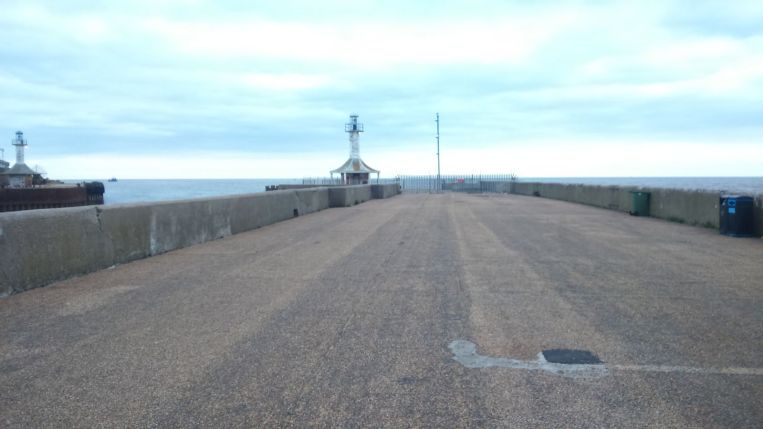 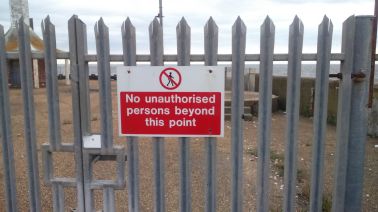 Lowestoft Claremont Pier, I tried hard to get to the end but couldn’t get permission. 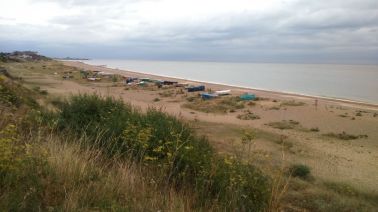 Digging more holes looking for Crazy Mary.     Doug was buried up to his head. I wonder if they ever dug him out? And the fishing fleet beneath Pakefield Cliffs looks distinctly tired. 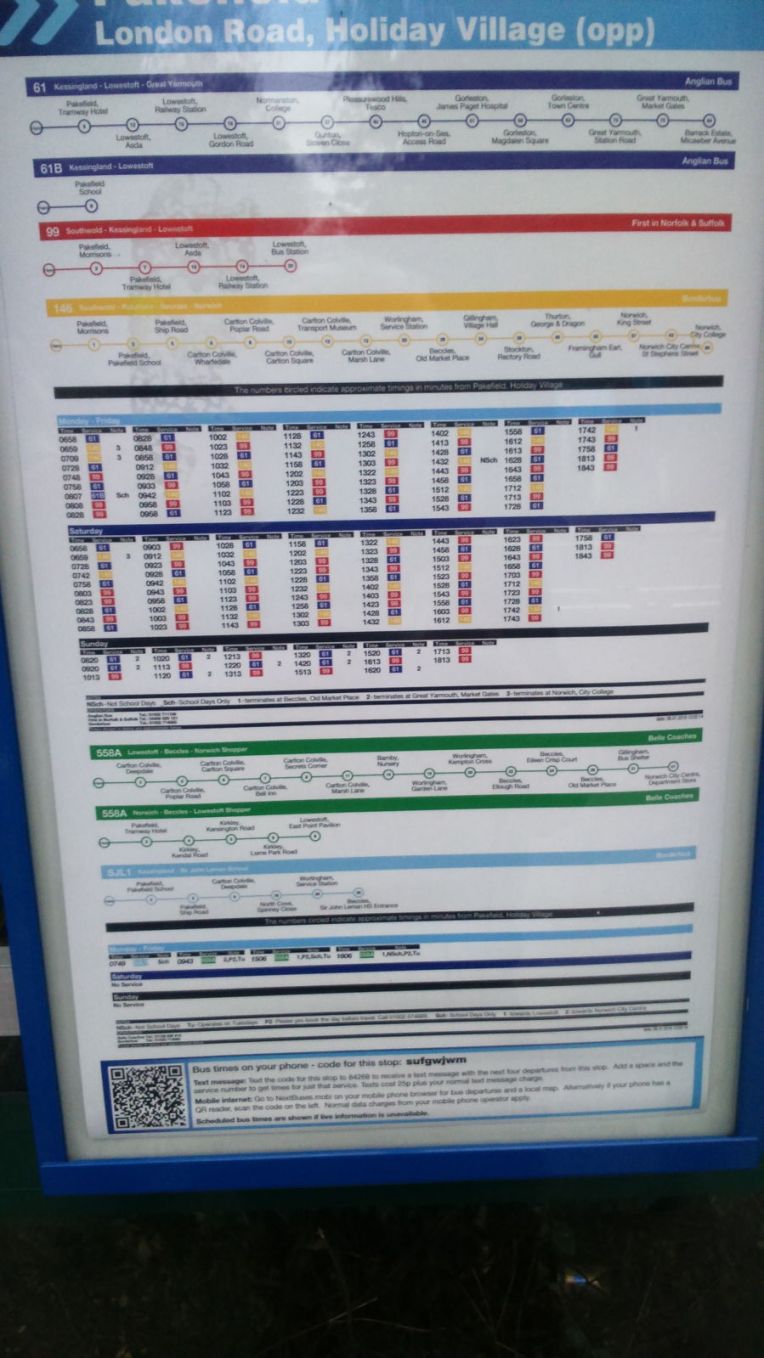 And the bus timetable for future reference – The buses run to Southwold – Kevin’s home town, about which he told many stories.

Crazy Mary is the ghost of a fisherman’s wife. The Fisherman died tragically and she is left wandering and wondering about his return. She is often seen in the area around nine in the evening looking for her husbands sails hoping he is safe and well, but in vain. She died of starvation…….. I start my next walk from Crazy May’s Hole – anyone care to join me…… appropriately there is a Look Out Station nearby.

Should I pitch up there?

Answers on a postcard please.