I’m nearing completion of my walk round England’s Coastline with only a scheduled sixty six miles to complete as the Northern and Southern S W Coast Path Crimson Worms battle it out to reach  the bottom at Land’s End first. This is the penultimate letter to you, our Grandchildren, hoping to inspire you to something likewise. You’ve all got it in you to achieve, if you want it enough. The final letter, or next Episode will reveal if I completed my target of completely walking around England – on the very edge! Sometimes over the edge..

I’m now staying at  Mousehole AFC Campsite, near Paul, Cornwall at the stage of finishing off The Walk, at Land’s End, with about 26 Miles to complete from St Ives on the Northern S W Coast Path; and about 40 Miles from Kynance Cove, near the Lizard on the Southern S W Coast Path. Even now, I do not know who is going to win. The administration, tactics, navigation, strategy, participation, communications, and latterly the photography are all in the hands of Major Big Andy McIntyre. Only my preferences were required The intention being to release me from any significant role whilst in a state of heightened emotion and anticipation of what I was hoping to achieve, and left me free to concentrate and savour my surroundings.

Throughout this walk, whenever walking alone, I have obtained my own balance and feeling of wellbeing by my own peculiar method of favouring humour and positivity, and eliminating the opposites. Works for me; but I’m vulnerable when walking with guests who may not have similar views, and my feelings sometimes are aroused. To avoid this, I crave indulgence from guests and avoidance of issues – even hearing my self saying “it’s my walk and I don’t want to discuss that!”

That’s the background; now for the practicalities of actually Walking. 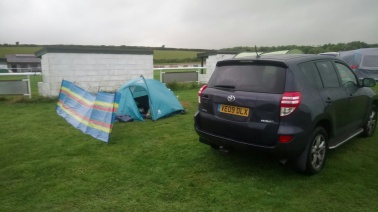 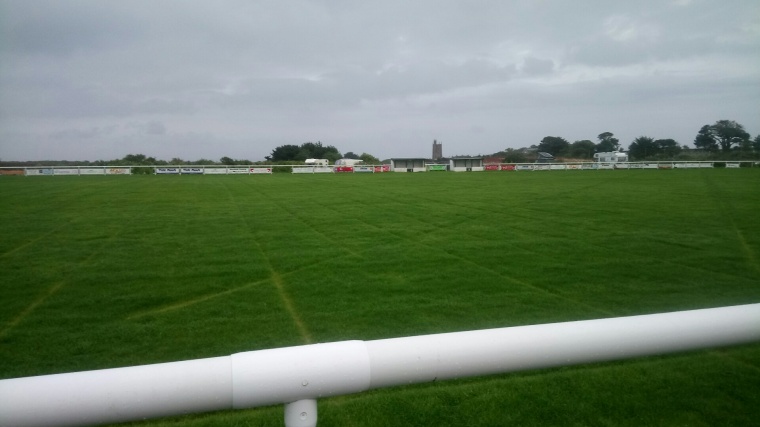 Good use out of season for the Mousehole AFC football ground as Big Andy, Donald, Stan and Bobl take up canvas residence for unspecified several weather dependant days, whilst The Walk heads for completion.The Church tower is a prominent feature in the neighbouring village of Paul, helping us navigate the peninsular. The second night   we could be forgiven for thinking also our last as we suffered horrendous thunder and lightning, accompanied by sheets of rain – always exaggerated by fragile tent fabric. Stan and Mumbles slept through it all.

My entourage and body guard, Big Andy, Donald, and Stan holding Mumbles, all tasked with seeing me safely over the finish line at Land’s End, while I savoured the final few days of my epic walk

The Plan was to walk the Northern S W Coast Path as far as Cape Cornwall six mikes short of Land’s End, today, and tomorrow let circumstances dictate the next move

Donald and Stan weren’t scheduled to join us till the second day so Big Andy and I set off from St Ives Station in an enormous cloud burst, with water  cascading  over the steps, flooded drains, bursting manhole covers and dark grey surface water  inundating the beach. This had echos of the recent flooding at Coverack. I ‘ve kept the negatives small. Just got to walk through it.

Not much for the coastguard to see here. Move on. Wetly. My camera and phone were slowly drowning  and we were immediately drenched again, with no option but to continue walking.

Gradually, over a couple of hours, the rain relented and we could see the lovely colours in contrast.. 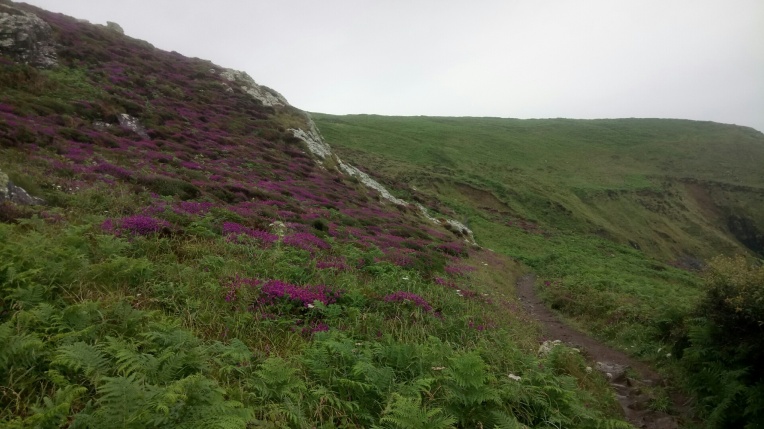 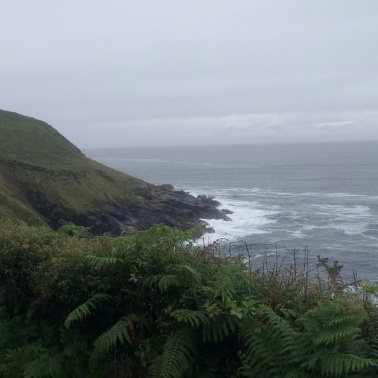 ..and we  came across Jasmine just about giving up and turning back. We offered her company to continue with us, which she gladly accepted. A fortuitous meeting with a lady literary agent, who is going to read the blog and who knows – a blockbuster…. the wet ‘s getting to you, bobl.

Jasmine left us around Zennor to find her Airbnb and to dry out. 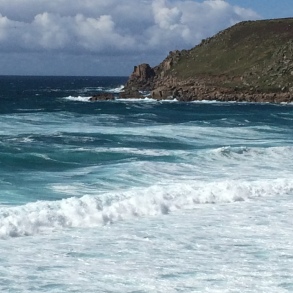 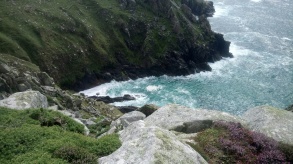 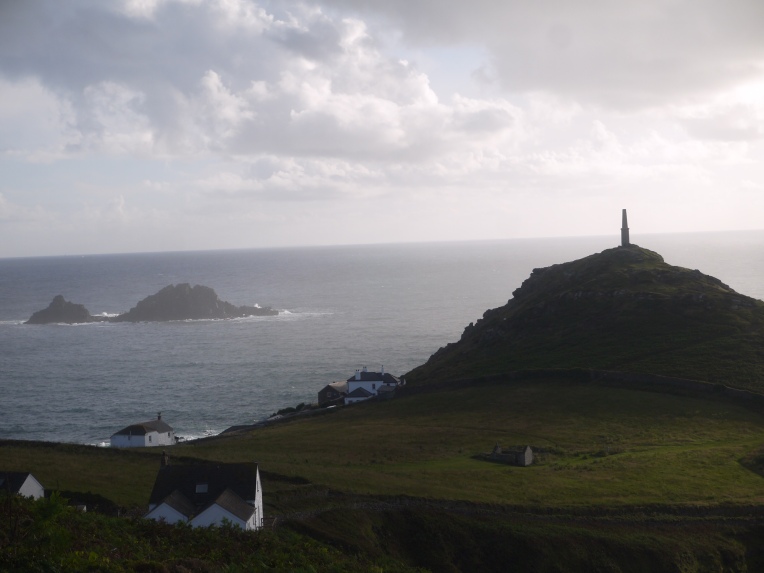 End of the first day – new arrivals join us tomorrow – who’d have thought  the rain this morning would have given way to sunshine. But the water made a mess of my camera and phone – unable to re-charge I gave all photo responsibility to big Andrew, as well as him navigating, plus strategy, tactics  and communications – I’m just here for the ride – relax!

The completed back up team ready to depart from Cape Cornwell on Day two, heading for Land’s End and hoping to be the first Crimson Worm to race to  the bottom, on the South West Coast Path. In sunshine.

Half an hour out and we passed The Brisons and the neighbouring countryside is full of pit falls – literally; mine shafts and workings are everywhere. Stanley counted them and we kept to the straight and narrow track.

And there’s no accounting for adders

Mind the adders. Here we find one miner and a minor looking for pirate treasure…. later on we could have done with such welcome cover when we watched the squalls home in on us. Stan was ok – he could get into sheltered crevices – not us, we were too bulky. Wet ourselves again. 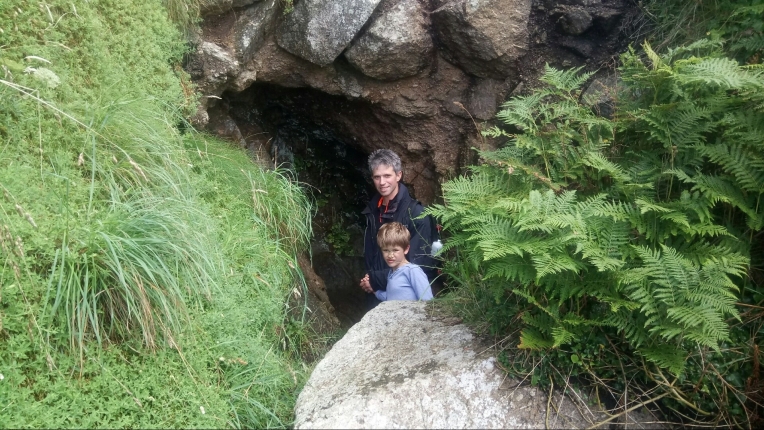 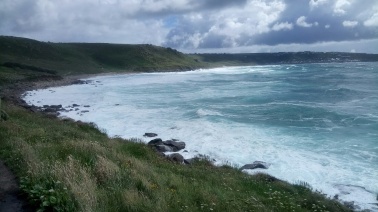 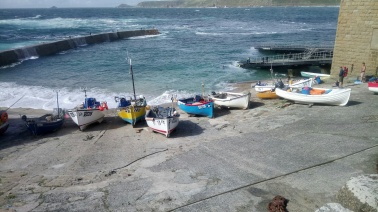 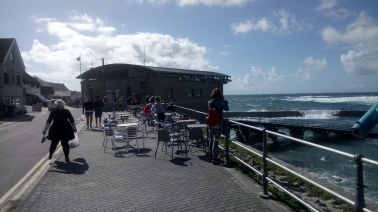 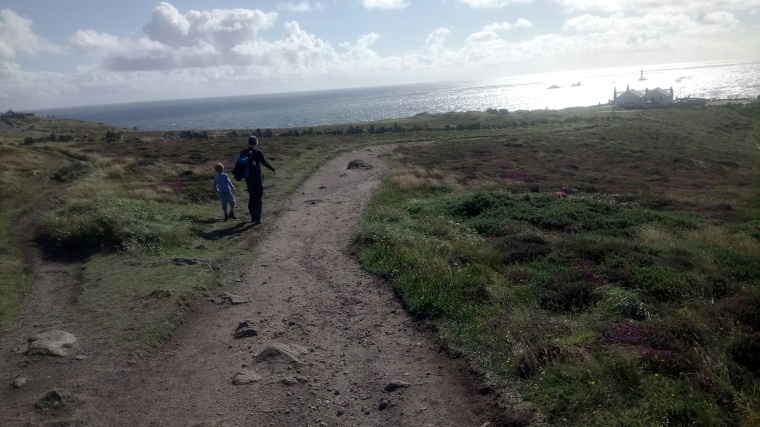 Passed Sennen Cove beach resort and Life Boat Station and on the Road to Land’s End with an inner glow.

Donald’s pictures take over where mine have now drowned in rainwater….. 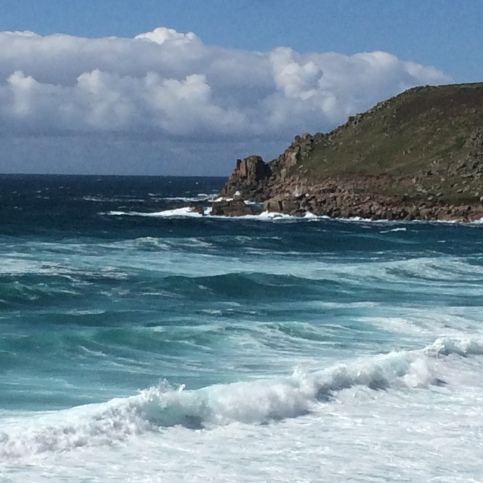 Land’s End is getting nearer, and the finish post…. Stan is quite casual about it all! 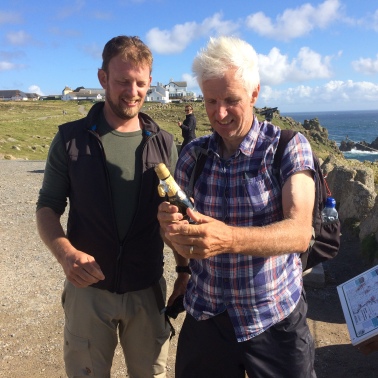 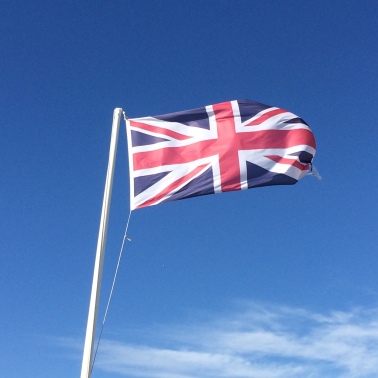 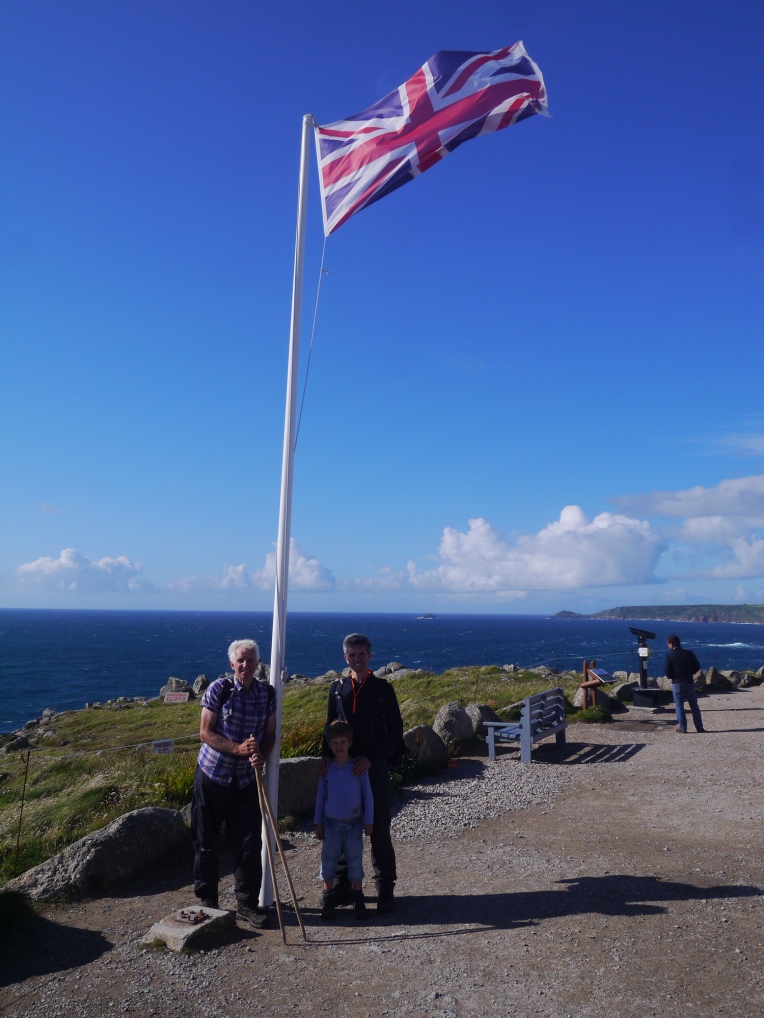 And the winner of the get to the bottom race is the Northern Crimson Worm……it’s not over!  There’s still 40 odd miles from Kynance Cove to Land’s End to cover  on the Southern S W Coast Path. But as an interim reward Big Andy produces some Champagne to celebrate with. Now we have to nurse the Southern Crimson Worm home from the Lizard without Donald and Stan, who deliver us to our new Starting Point for Day Three , Sunday.

We will gloss over my only area of responsibility and how I managed to leave the car keys  in Cape Cornwell, for the car at Land’s End. Stanley found a flying fox/zip wire; I would’ve walked; Donald would’ve hitched; Andy said he’d take the bus; he did but later transferred to a taxi…… result keys returned,  and free to eat celebratory meal at LE restaurant 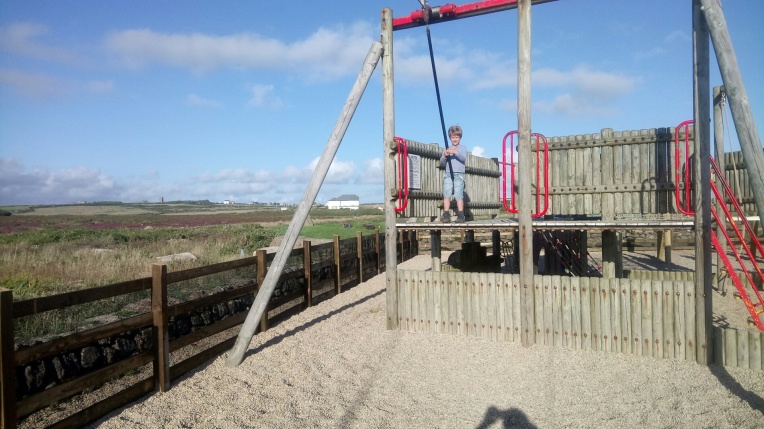 The only way to go to Land’s End – by zip wire… So what happened next?

Only 40 or so miles to go and I’ve walked round England. Did I do it? What went wrong?  Reply and request the final instalment -Episode 93 – the only clue I’ll give – I’m recovering and soon be ready to have another go…

here’s Big Andy’s perspective  – I can’t remember where they all fit in – I was too busy navel gazing but day two just about covers it.

Playing on the breakwater at Sennen Cove 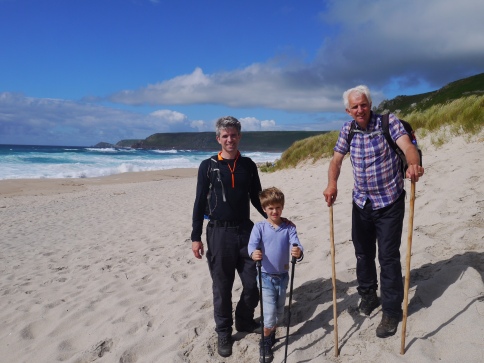 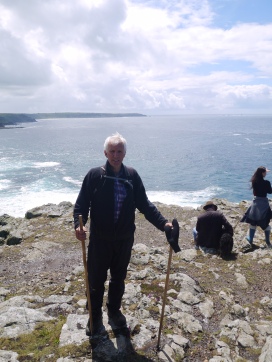 Better weather on the second day