Welcome back to a New School Year and a refreshed Walking Blog with added Wales. Only Maisie remains at home, Ro and Ro begin new schools and Lauren, Stan and Jake resume their old haunts. I begin a new path too! Having run out of England Coast Path, with still some fuel in the tank, I’ve taken on the 870 mile Wales Coast Path starting at Prestatyn and heading for Chepstow, by the Old Severn Crossing.

I already have some Wales Coast Path miles in the bag after  completing Offa’s Dyke Path at Prestatyn in June, 2013, I carried on to the English Border around Queensferry heading for  The Wirral. So, after this first outing , I “only” have less than 800 hundred miles to go. Plenty of time for all to join in, and those who managed to escape the Round England phase – beware – we have ways of making you walk!

The rules remain the same as before; refer early editions of the blog; the logistics should be easier because unlike 90 per cent of the England Coast Path, The Wales Coast Path is already in place. That doesn’t mean I won’t get lost – I still claim that right – but I have to get used to a different logo highlighted above. I’m also very much nearer the workface; in latter stages of the last walk I was travelling for days just to get to each start; now it’s almost in our back garden. Well, the River Teme is our back fence line and forms the English/Welsh Border. Once the River got too friendly and invited itself into our kitchen. It is an old watermill, so no real surprise. As a result we installed flood protection, shifted upstairs and now have a winter and summer kitchen. Curiously enough, although there has been no repeat of the amiable  river intruding, the flash flooding threats are just as  likely  winter or summer.

The Crimson Worm, race to the bottom at Land’s End, a  feature of the last English Walk proved so popular that a Mrs Trellis from Llanfairpwllgwyngyllgogerychwyrndrobwllllantysiliogogogoch wrote in demanding similar status for Wales. Since I arrived at Bangor Pier in sight of the above village across the Menai Strait, the race is almost over, and will be when I enter Anglesey, next trip. Therefore, in order that a North Wales Crimson Worm can do battle with a South Wales Crimson Worm, I shall select Aberystwyth as the Finish Line, an area I know like the back of my hand, having had my head examined and stitched up during an adventurous  Sheffield University Surveying Course. Let battle commence.

It also enables me to be selective in choosing which prevailing wind to have at my tail when organising future walks. As did the North Crimson Worm start from Prestatyn, so the South Crimson Worm will start from Chepstow, possibly my next visit.

Preliminaries over – let’s get on with the pictures.

Big Andy joined me for this inaugural walk in Wales. When he’s in charge of logistics I can sit back and relax, no need to remember where I left the car or where I pitched the tent . I organised the Campsite. I realise now that it was cruel to subject such an ex-Military Man to the harsh environment of a tented holiday camp rife with screaming kids, barking dogs and raucous civilians – I fear it was down there amongst the lowest ebbs of his life under canvas. 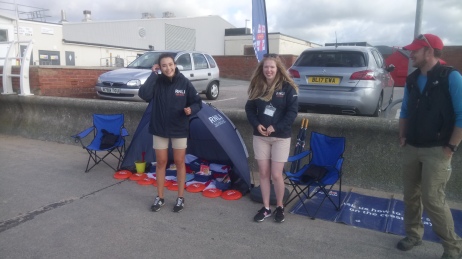 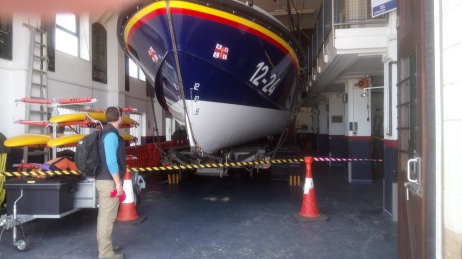 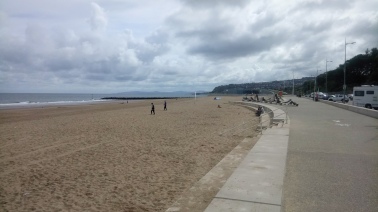 The RNLI features large on any of my coastal visits and we’re always impressed by their latest equipment, although such benign, mill pond seas at this time deny the necessity. Just watch the latest RNLI TV  to see real value under pressure. My favourite charity. 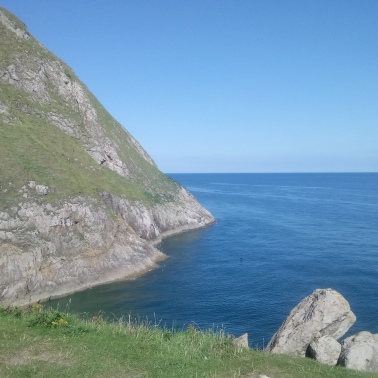 Penrhyn Bay approaching Little Orme, early Saturday , no one around.

Llandudno RNLI Station were having a fundraising event with all equipment and new premises on display. 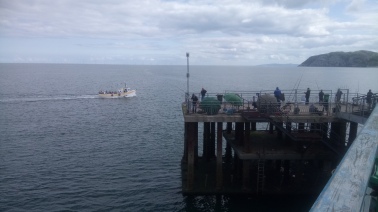 appointed and good coffee and

Llandudno Pier, well worth the trip; a different league from Colwyn Bay Pier 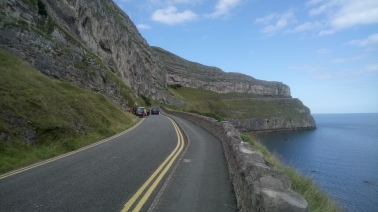 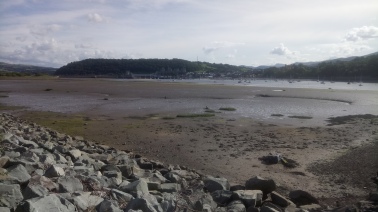 Around Great Orme’s Head and the entrance to Conwy from Llandudno Junction, by road , rail and on foot; and the A55 tunnel is underfoot, or rather under water. 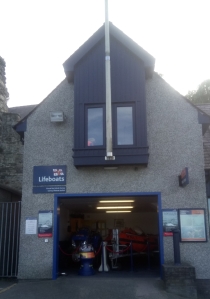 The A55 tunnel from LLandudno Junction  under the Afon Conwy emerges on the Conwy side and quickly joins forces with the railway and unfortunately the Wales Coast Path until Llanfairfechan, where they diverge and give each other more room into Bangor. At least it allows the footpath to be relatively level; whereas the railway and road duck and dive through tunnels cutting through the rock. 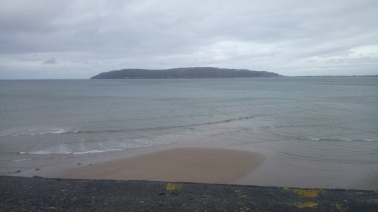 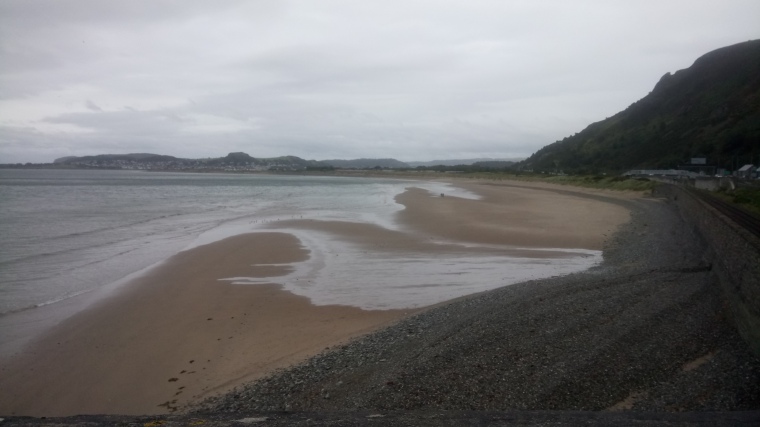 Looking back over the Conwy Sands at Great Orme and Conwy Bay. 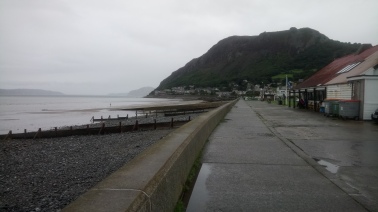 The old Quarry towns of Penmaenmawr and Llanfairfechan exhibit resculptured landscape and scarred evidence of heavy rock industry served by a port long since abandoned. The pavilion tearooms are still there providing scrumptious cakes and pots of tea at old fashioned prices with excellent service. I’m afraid I filled my boots.

And so to Bangor – I wish I could say it was uneventful – but on my own again I managed to enter by the most circuitous method and even joined the  ever reducing spiral of Llandygai Industrial Estate, which promised an exit at Maesgeirchen but never delivered. I resorted to the old route of the A5, which delivered me to Bangor Pier, up there with Llandudno Pier for maintenance and fruit cake.

Middle dead centre is the Menai Bridge serving Anglesey and Llanfair P G, my target for this walk – I ended up about a mile short as I diverted through the leafy roads of Upper Bangor to the railway station, where my transport back to Llanfairfechan awaited to take me to VERA, who you’ll be pleased to hear has a stay of execution while the Walk around a Country the size of Wales continues.

Bangor Station – the end of the line for now – and Llanfairfechan Station (request stop!) where Vera stood guard at the Pavilion Tearooms.

Finally a dedication to my old school friend Dave Shipp, who died a year ago. All the area I have covered above, was his territory as a long standing resident of Llandudno Junction. He was an adventurous walker and covered many paths including passing alongside us on Offa’s Dyke on one occasion staying at The Mill, but sadly we never joined walking forces, even though he swore on one trip we did it together. I visited Gill at their house, Ty Craig, with not the slightest notion of how to get there, but drove unerringly through the tangled lanes and private drives ending up in their driveway. I think Dave must have been navigating.