Last Thursday was the first of three carefully scheduled   days needed to complete my circumnavigation of Wales. Everything worked like clockwork except the heat, which was solar powered and record breaking. 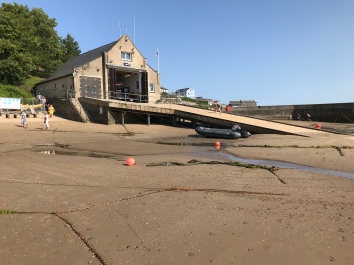 First port of call, after dousing myself in sunscreen, was the New Quay Life Boat station . No one around to talk to so move on round the bay before the midday sun arrives and it gets too hot. 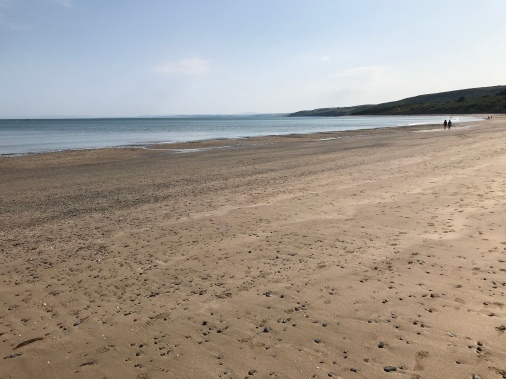 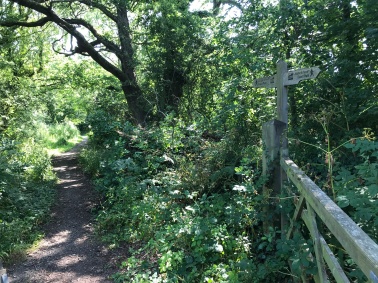 Soon moved off New Quay Bay to the shelter of the foliage overlooking Little Quay Bay, me dodging from shadow to shadow.

Shade was now at a premium and my water bottles were heating up. Serendipity found me a caravan park gardener hosing down his bedding plants. He pointed out the drinking water tap and I was soon replenished and underway again. Even though the sunscreen had now melted on my forehead and was running into my eyes stinging them quite painfully. Navigating was always quite difficult. This was just rubbing it in!

My oasis below at Llanon

I too had heated up, having been out all day in the sun. It was now five o’clock and I needed a boost. Or a chill.

As the Wales Coast Path gradually merged with the shoreline, an executive decision was made for me also to merge with the seawater. Despite the heat the sea was still quite cool and although I otherwise changed, paddled, splashed and towelled down for about an hour I never had the courage to fully immerse myself.

l am long out of practice at beach changing and balance is a forgotten art so when my ablutions were eventually over  I began the rest of the walk  with sand and damp patches everywhere. So no more pictures!

in fact the final walk in to Llanrhystud was quite an adventure. I had to change maps and there was no overlap which is probably why Llanon got missed. Also the WCP comes inland and merged with the main road. Sadly in the confusion, I messed up and ended up on the main road too early and was immediately in conflict with peak hour traffic, which does not acknowledge pedestrians.

Nobby was still there when I reached the city limits of Llanrhystud. Someone appeared to be standing guard over my car as I approached. Ever cautious I swapped to the other footpath and as I drew level ran for the driver’s door and was in and away all in one swoop. The “guard” hadn’t moved, or indeed woken up! Perhaps I was mistaken?

i arrived home by eight in the evening only to get an alarm call from Nanny telling me that we had acquired a cow or bull in the garden munching it’s way through out raspberries.

After a bit of peekaboo around the barn the heifer  eventually decided it was more peaceful in the river and leapt the fence to get back with her mates.

The farmer made a belated appearance when the fun was all over.