Introduction to other than Rosie, Lauren, Stan, Jake, Rowan and Maisie!

Since about November 2013 I’ve been knowingly walking round the Coast of Britain. It’s not the sort of thing you immediately crow about until you’ve got the first couple of thousand miles stashed away, and even then knowing looks give away the sender’s thoughts that this is only a passing phase. It’s only now that I’m embarking on my third country, Scotland, after completing England and Wales, that I have some credibility. But now my age, stamina and longevity are brought into question. Not to mention my mental health.

I’ll have it known that until now, and for as long as I  haven’t collapsed exhausted in a screaming heap, I’m doing ok – thank you.
Except the blogging bit! I record details of each walk by way o a letter to grandchildren Rosie, Lauren, Stan, Jake, Rowan and Maisie. This takes up disproportionate time and effort and my recent travel memory comes under severe scrutiny, and that’s only remembering passwords and systems to get into and outmanoeuvre WordPress, a constant nightmare on publicising my walking efforts.

I have therefore established my intention to walk round the coast of Britain and if I need a reason it could be that, especially now bits are falling off ( me too) and eroding, and countries are seeking independence, so I probably need to move more quickly.

Last July (2019) I completed the circumnavigation of Wales after finishing my version of The England Coast Path some two years earlier. I phrase it that way because last time I looked, The ECP wasn’t due to open until 2020, so it involved much research and guesswork and a lot of being lost. It’s all recorded in the previous 137 episodes and I have it on good authority that what it lacks in literary genius it makes up for as a cure for insomnia.

And so after almost four months rest, ostensibly to catch up on home repairs and maintenance last Sunday Nanny, ZUD and I returned to the fray and headed for the Scottish border; in particular Carlisle and Gretna where I reunited with Hadrian’s Wall Path and Solway Firth.  I’d previously passed through in October 2014 on my way to Berwick on Tweed linking the East and West coasts of England. 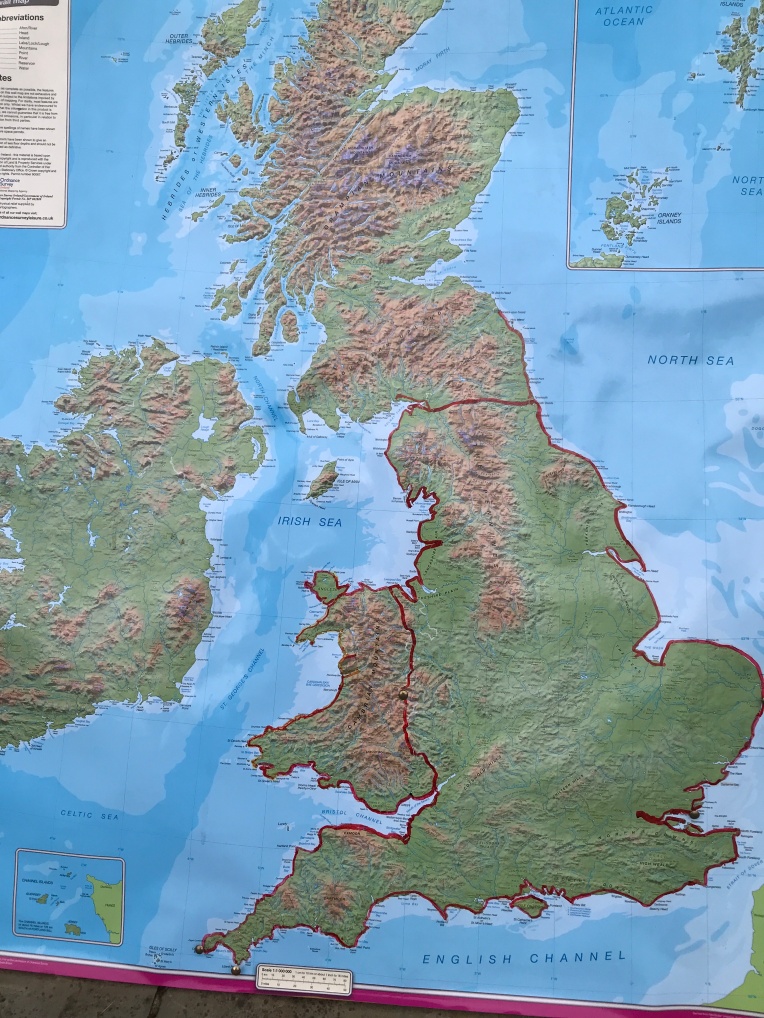 The crimson worm strikes out again along the Cumbria Cosstal Way, starting from The River Esk in Carlisle heading north westish to cross the River Esk and the Solway Firth heading for the border at Gretna.

Below a footbridge over the railway at the River Esk gives a aerial view of the low lying countryside but after that no connection whatsoever with footpaths. From Hereon I had to take my chances with traffic. Somehow I fear this is going to be the general pattern. Worn footpaths generally don’t exist and if they did the heavy  frost soon disguised them. Mists had a habit of descending just before dusk and I was aware of the danger of getting completely lost 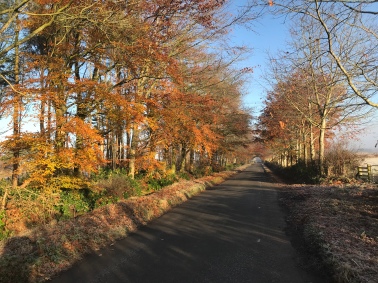 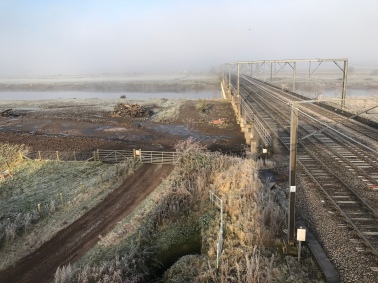 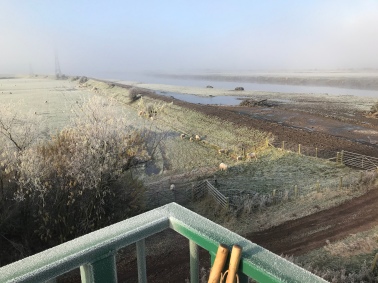 Gretna and the first and last house after and before crossing the border from England into Scotland. Many young couples made their way here to get married when the age of consent was 16 in Scotland but 18 in England 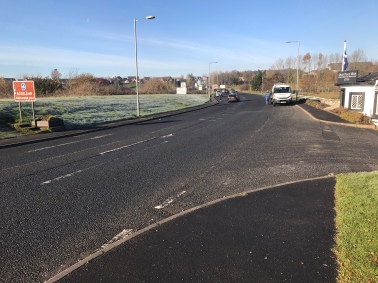 Annan was the home to The Devil’s Porridge Museum and 30,000 in comers during the wars when they manufactured Cordite for artillery shells. A highly dangerous place but quality volunteer accommodation and mixing bowls for the “porridge” of cordite 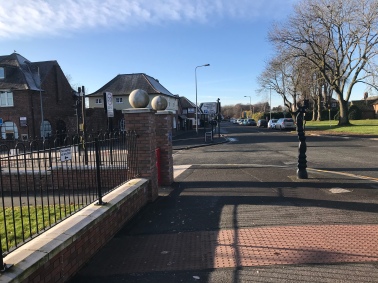 I always record the final position of each walk just in case I need help remembering where I fetched up – this time at Clarencefield some eleven miles short of Dumfries. Let’s hope the road is open when I return?