PRE-RAMBLE     – Last time out, when  heading for Dumfries,I’d terminated at Clarencefield about ten miles short. My programme this time was to make up the shortfall and then continue vaguely westwards towards Kirkcudbright and have a brief respite whilst investigating paternal ancestral connections.

I was also experimenting with sustainable transport links – abandoning the car and resorting to public transport. I had prebooked accommodation in Dumfries and Kirkcudbright, but not allowed for the disruption caused by almost continuous” rain which resulted a ten mile gap in the itinerary between (nearly) and Bridge of Dee. 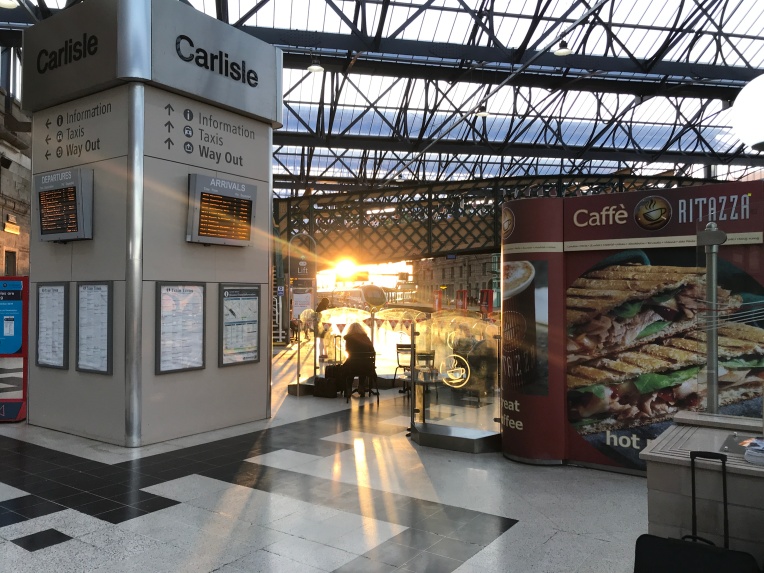 Returning home above…,,,Surprise Sunrise at Carlisle Station above- the train was 20 mins late due to driver taken ill – but I made all my connections and ended up a few minutes early at Kiddy, reunited with Nanny and dance and travel weary, flu ridden Annie, Rosie and Lauren
Verdict. The sustainable travel method is ok!

NOTES ON THE MAP

Notes on the map? What map?

-Although I walked well over 30 miles and thoroughly examined Dumfries and Kirkcudbright this trip, I have not brought the route map up to date, because I did not complete my scheduled program.

-I started by joining up my previous terminus at Clarencefield with Dumfries and intended to  complete the walk via Castle Douglas, as far as Kirkcudbright but the wet weather interfered such that there is a gap in my colouring in between Bridge of Dee and Beeswing.

-I therefore cannot claim to have walked as far as Kirkcudbright until I’ve filled in the missing link – next time out ……… nevertheless I stayed in Kirkcudbright a couple of nights to investigate Clan McIntyre’s allegiance with the area particularly Sea Captains John and Alexander, and twin uncles Colin and Malcolm’s association with The Kirkcudbright Academy

With Nanny on duty babysitting Rosie and Lauren, coupled with dance chaperoning last week, I sadly missed their performances and on Wednesday left Kidderminster Railway Station heading north, changing at Smethwick, Galton Bridge, again at Wolverhampton, then Carlisle, terminating at Dumfries where I checked in at Glenlossie Guest House for two nights. Four and a half hours door to door. Not bad struggling between platforms with a full back and front pack.

This is the way it’s going to be now. Sustainable! Trains, buses and Shank’s Pony.

Next day, on the Thursday, I got to know the buses to and from Clarencefield where I’d fetched up last time out. The main difference this time was that I was soaked- the forecast rain swooped in earlier than anticipated after I’d left the Farmer’s Inn (lunch) in good time but the bus made bad time picking me up after losing a wiper. I didn’t know that until after standing 40 minutes shelterless a very apologetic driver explained. If I’d known I’d have stayed in the hostelry below, longer!

Glenlossie Guest House above my home for two or three nights, truly accommodating – for all!

above – with the banks of the River Nith in Dumfries meandering all over the place, it was easy to become disorientated- and Craig who provided me with a personal taxi service to the railway station after I mistakenly turned up at the Bus Station. Accolades also for Mark and Laura of Stagecoach West Scotland who got me back on track.

As a general comment on the people I met on this recent tour, I was quite taken aback by their hospitality and helpfulness. I suppose a loaded up walker slightly out of season is going to attract attention. I’m learning to carry all my equipment and would probably appear overloaded and worthy of comment. I’m still shy of telling people what I’m doing but with two countries circumnavigated and four and a half thousand miles under my belt I can speak with credibility while being listened to with incredulity 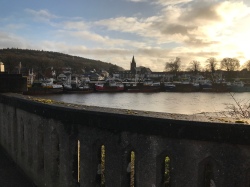 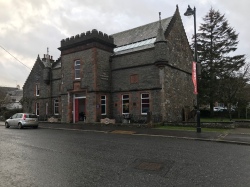 Above views of Kirkcudbright – I will return to do more family detection around the fishing harbour and old buildings. So far we have evidence of sea faring captains  Johns and Alexander’s McIntyre. The two museums, several churches and the cemetery all provide fertile grounds for deeper research – and maybe a few skeletons…..

……apparently uncles Colin and Malcolm attended Kirkcudbright academy when evacuated to there during WW II – sadly no records are kept by the school. I visited the cemetery not long enough to get spooked and this time no headstone scraping – it seemed bigger than before – well it would be – that was 60 years ago!

i stayed at the Baytree House for my duration in Kirkcudbright – again the couple running the place were most accommodating. I will return and next time will not lose the keys. How I can say that with any degree of confidence is beyond me.

…..,,   I carry several hi viz vests and during a particularly wet journey along a disused railway line I grew tired of the number of barbed wire fences the right to roam made me hurdle with full back pack and front pack. I roll the vest round the barbed wire covering the spikes and with a mixed western roll high jump technique complete with packs, execute a flight through the wires whilst my sticks hopefully hold the strands apart. If not I end up trussed like a turkey at Christmas trying the eastern cutoff to disentangle myself. You only need one stray barb to penetrate a trouser pocket and there’s yer key gone!

the option of not walking the rail track but in the gutter of the A75 or A711 is dubious – there are very few footpaths. 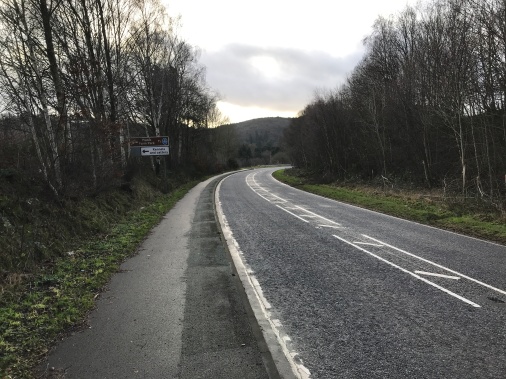 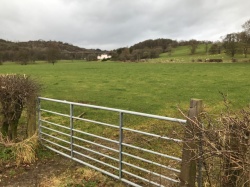 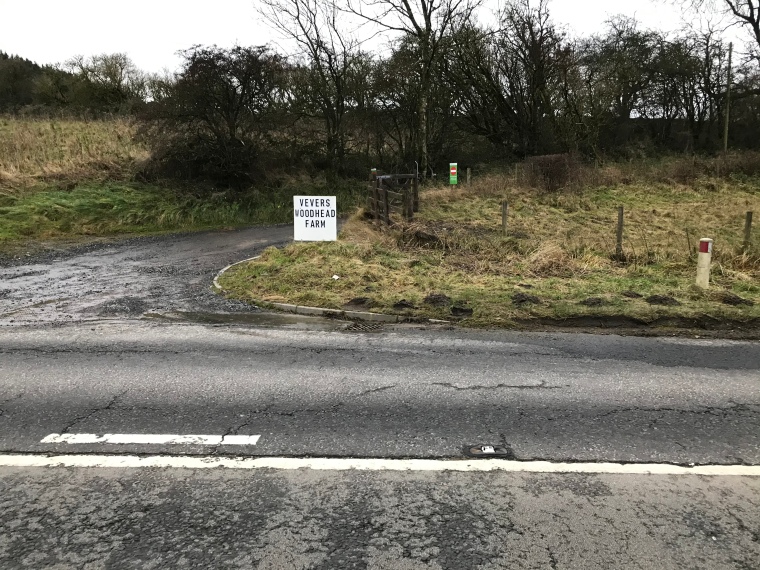 Above: Where I gave up on Sunday – a mile or so short of Beeswing on the road to Castle Douglas rain threatening and daylight fading – no buses seen all walk and energy levels dropping. 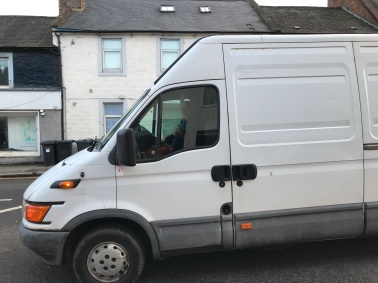 An early morning start retracing my steps to Dumfries Station and back to Kidderminster via Carlisle, Wolverhampton, and Smethwick Dalton Bridge,