We are  so sad to inform you that Stanley and Rowan’s Nanny Ros passed away early Sunday morning at her home in Ludlow. Sarah and her brothers Nick, Paul and Matt were with her and  our sincere condolences go out to them at the loss of their mother.
Nanny Ros Was a lovely lady and is now at rest.  Stanley and Rowan will have many happy memories of their Grandmother, as will Sarah and Donald have of Sarah’s Mum.

The added Coastal Crimson Worm indicates so far, my stroll of 4594 miles around Britain’s coastal paths,  since November 2013. With England and Wales completed, only the rest of Scotland remaining, from near Creetown in  South West Scotland to border town Berwick on Tweed on the East Coast.

The story so far – 28/1/20- bringing new readers up to date -on Lauren, Sue and Dick’s birthday! –
About November 2013, when I finished walking the Offa’s Dyke Path , at both ends, I needed a similar challenge to occupy my recent retirement. So I just kept walking the English coast, north from Prestatyn, and/or south from Chepstow. This morphed into walking the (then) proposed England Coast Path route, originally due for planning completion this year -2020. I finished my version of The ECP at the end of Southend Pier on my seventieth birthday in November, 2017. There were some discrepancies and coastal erosion but essentially the two ECP versions matched – but I got there first before the Environment Agency had completed their route round England.

And so I steered my walking boots in the direction of the Wales Coast Path, which I finished on my 72nd birthday in Aberystwyth .

Inevitably, that left Scotland, whose debatable long distance coast line is worth at least England and Wales combined, of which I had already supplemented by bagging Hadrian’s Wall, thinking (or maybe hoping) Scottish independence would negate the need to circumnavigate the Scottish Coastline, which incidentally is nigh on impossible to define – let alone walk!

My itchy feet combined with indecision  on the Scottish independence referendum eventually I chose the Scottish high road for my final walk of 2019 which was also my first into Scotland crossing from Carlisle into Gretna.

As my walk progresses round Scotland the route will gradually unwind, or unravel depending on circumstances and my walking rules still apply – you’ll have to scroll back to very early editions of the blog to find the rules, but they still apply.

Basically the main rule is that I make the rules!

The other side of the country, I had completed the ECP up to Berwick upon Tweed, not yet venturing across the English/Scottish border, nervous about my Scottish reception from Nicola and her SNP

And here we are, in the present, just about to write up Episode 140 following completion of the second Scottish walk of 42 miles bringing the frontier to within three miles of Creetown in Dumfries and Galloway and the grand total of 4,594miles walked around The British Coastline.

you are now up to date……

Here’s what happened on the way to (nearly) Creetown-

For the uninitiated, my walk reports take the form of a letter to our six grandchildren currently aged five to fifteen, with instructions about how to walk round United Britain when their turn comes. Take care- there are 140 episodes and hundreds of O/S maps logging my exact route…..

Last time out walking in December 2019, time and weather conspired to prevent me completing my schedule and there was a big gap in my progress along the A711 from Beeswing to  Bridge of Dee and I need to regularise my progress map.

Once I had tidied up these loose ends, I could then concentrate on advancing the frontier in the direction of Mull of Galloway, Stranraer, Ayr and Ardrossan, where there will be a significant sea change in strategy?

Serendipity plays a big part in my planning, but as you will find out – how do you say – the Calmac fairies will also come out to play……..?

All will be revealed as the tour unrolls!

Didn’t we all have a lovely time ski-ing in Trysil over Christmas? I’ve never done it before and I amazed myself that by the the end I could ski – well sort of!  I finished one of the formal routes with only two major collisions and how I ended up with no real damage is beyond me. Serendipity (and the fairies) is/are alive and well in Norway too!

You were all very accomplished too and made me wish I had taken it up at your ages. But discretion is the better part of valour and I’m quitting whilst ahead or at the top of my game and concentrating on my walking. I’m sure the slippery, sliding experience will come in walking use and who knows what the Scottish weather has in store for me? But at least I’ve got a whole new range of cold weather gear.

Last episode I described The Walk crossing the border into Scotland and this time it’s all about establishing a foothold and getting my strategy right to attack the next – maybe- four and a half thousand miles.

Leading up to this last visit I had been watching the the long range weather forecasts and a period of exceptional high pressure foretold excellent walking conditions.

The tried and tested (Nanny operated) train and bus travel arrangements swung into action accompanied by value for money Scottish accommodation with odd days left for the tenting option. I covered all eventualities.

As it turned out I lugged a full rucksack, tent and all, around for several days and proved my fitness and planning capabilities, whilst managing to keep the tent in its wrapping paper and a solid roof every night whilst adding 42 miles to the walking tally. All part of the greater plan! Plenty of low cloud and mist but not a drop of rain

Bridge of Dee – below 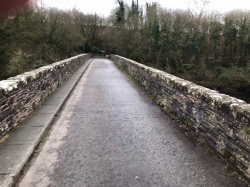 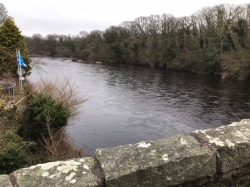 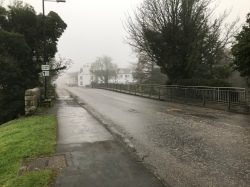 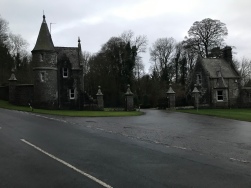 Port Macadam, Gatehouse of Fleet below 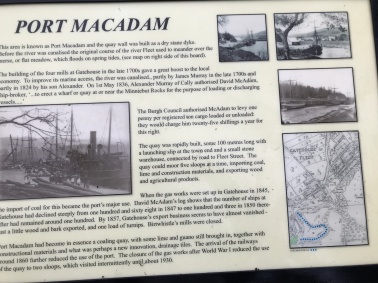 Below – I Following the A75 where necessary but using the back lanes if possible. The old road was left intact in many places and occasionally country lanes duplicated the route. Walking the single carriageway main road without footpaths was downright dangerous and wherever I could I opted for the less trafficked option. Progress was slow but at least I didn’t become a tragic traffic statistic. Heavily laden Logging trucks in one direction with processed timber products the other way made for lengthy convoys at top speed plus a bit. Somehow the bus services dodged all this and provided an excellent long distance and local service which meant I only faced the traffic music one way.

Although I managed one dark evening to be three miles short of my Twynholm lodgings on the wrong side of the River Dee at Kirkcudbright. And no more buses!

i had no choice but to leave Kirkcudbright on foot following the streetlights on the B727 over the River and into the darkness beyond . Worryingly the B727 plus it’s streetlights turned off shortly after crossing the river and for the next hour I followed the vague dotted white line of an unclassified country lane with a head torch and hand torch. The rare vehicle that passed proved unsurprisingly unhelpful for lifts but tail lights allowed me to memorise the upcoming route once I’d recovered from diving for shelter in the ditch.

Spooky! I survived but I’d have been happier with Max or Jay alongside. There again both Max and Jay wouldn’t have ventured out. 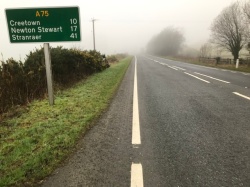 Above the infamous A75 and side show.

Above- views of Wigtown Bay and Solway Firth – in January – hasn’t rained all this trip
Below – End of the line this trip where the back road from Barholm Castle intercepts the bus route and rejoins the A75. The bus would need sufficient warning to pick me up safely on this fast roadway- I was concerned it would go sailing by. Needn’t have worried😜- the bus service worked like clockwork and I was soon reunited with my rucksack in Twynholm 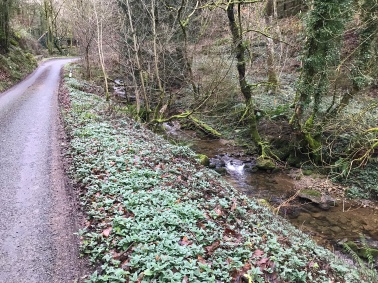 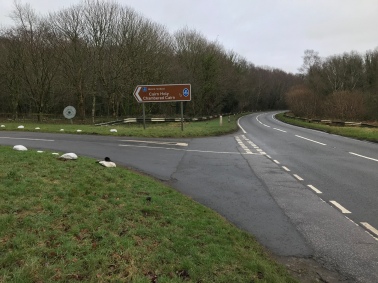 hanging around waiting for the bus

And finally a word for the hostelries: both Glenlossie in Dumfries and The Burnbank  in Twynholm I would happily return to for value for money, friendliness and helpfulness. Both remain on the direct route heading for Stranraer and could suffice as a staging post on future journeys.

My carriage awaits; just need a lift with the rucksack and about to depart Dumfries and return home

Having safely reached the start of my homeward journey I had time to reflect on an excellent trip. The only downside of this particular episode was walking the A75 when I couldn’t locate a safer less trafficked route. Often the old route duplicated the new alignment when it hadn’t been buried and there might be safe walking on parallel lanes or private land, but generally there was no provision for walkers either alongside or away from the main road.

Am I missing something in Scotland? I’m a bit nervous for the rest of the walk, but there doesn’t seem to be obvious alternatives. Surely they had the opportunity to include footpaths on the realignment of the A75, my observations as an erstwhile bridge engineer leads me to believe that the highway upgrading is very recent and has speeded up the traffic with no benefit  at all for the pedestrian. In fact it is more dangerous. After all we are all pedestrians once we step out of that car or lorry or public transport.